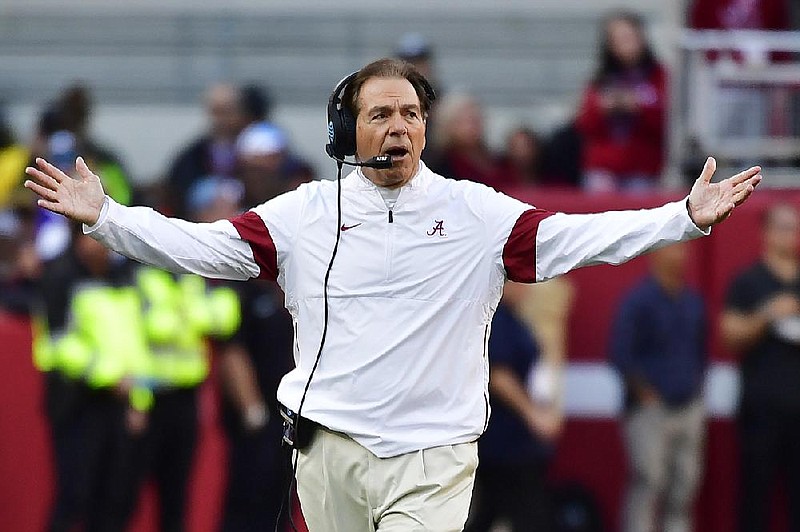 Alabama head coach Nick Saban reacts on the sidelines in the first half of an NCAA college football game against LSU, Saturday, Nov. 9, 2019, in Tuscaloosa , Ala.

It is one thing that definitely cannot be blamed on the coronavirus, which has sneaked back into our lives with a vengeance.

The SEC, for the second consecutive year, has four new head football coaches.

A year ago, Sam Pittman came to to Arkansas to try and get the ship out of the mud and back on course. He got the Razorbacks three wins, and it would have been four if the officials had known the rules in the Auburn game.

Ole Miss hired Lane Kiffin, who has not been the retort smart aleck he was expected to be. He went 4-6 and lost to the Hogs.

Mississippi State got Mike “The Pirate” Leach, who opened with a shocking 44-34 win over defending national champions LSU then lost four in a row before beating Vanderbilt, lost the next three and finished with a victory over Missouri.

Missouri hired one-year wonder Eli Drinkwitz, who had spent a season at Appalachian State before the Alma native and proud graduate of Arkansas Tech picked the Tigers over the Hogs.

They shared more than a rookie season in the SEC: They all lost to Alabama.

The NLS virus is one of the reasons there is so much turnover in the SEC.

NLS is officially known as Nick Lou Saban, although there doesn’t appear to be anyone in the world brave enough to call the Alabama coach Lou.

NLS may not have had much to do with coaching changes at Vanderbilt or South Carolina, but his fingerprints were all over the firings at Auburn and Tennessee.

Now comes four new horsemen who have the chance not to be known as famine, pestilence, destruction and death.

Josh Heupel becomes the fourth coach in a decade to try to get Tennessee back to relevance.

The Vols are the permanent cross-division opponent of Alabama.

Shane Beamer takes over the reins at South Carolina, a school that had an all-time losing record until Steve Spurrier arrived and made them a contender.

Clark Lea returns to his alma mater, Vanderbilt, where he played fullback. He’s 38 and comes home (he was born in Nashville) after three seasons as defensive coordinator at Notre Dame.

Last, but never least in his mind, Bryan Harsin will be on mission impossible at Auburn, trying to replace Nick Saban as the top football coach in the SEC and Alabama. They have similar personalities, so they’ll probably privately hate each other.

Harsin is a reverse of Lea. He’s leaving his home town of Boise, Idaho, where he was the head coach since he left Arkansas State after a 7-5 season in 2013.

He, too, gets to tackle the NLS virus every season.

Last year’s new coaches, even Kiffin, seemed to know you don’t poke a stick at NLS.

None said anything negative about the Alabama coach and in fact Kiffin, who worked for him and parted on not-good terms, says nothing but good things about him,

Since Saban arrived at Alabama 15 years ago, every school in the SEC has changed coaches at least once and some several times.

It is not a league for the weak or timid.

SEC football is Saturday’s religion and the belief’s run deep. The No. 1 belief is you better be competitive. You need to beat Saban at least once in five years and be in a bowl game every year.

When that doesn’t happen, coaches are fired on a very regular basis.

To have eight new coaches in a year in a 14-school league is a bit surprising.

Now comes the latest class of hopefuls who will soon find, if they don’t already know, the league is about speed and recruiting.

So far that formula has worked well for Saban and resulted in a bunch of coaches fired who didn’t get it.