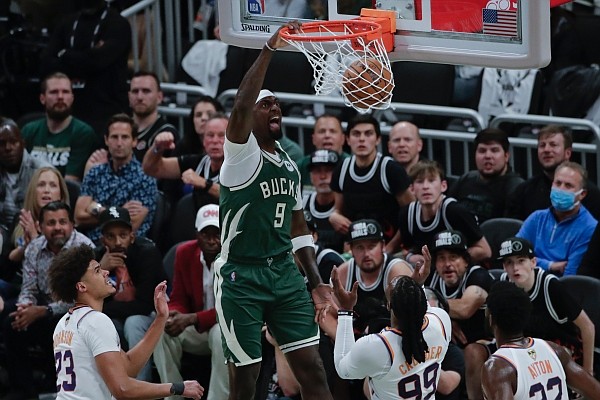 Milwaukee Bucks' Bobby Portis (9) dunks during the first half of Game 3 of basketball's NBA Finals against the Phoenix Suns, Sunday, July 11, 2021, in Milwaukee. (AP Photo/Aaron Gash)

As he has numerous times throughout Milwaukee’s run to the NBA Finals, Bobby Portis provided a key spark for the Bucks on Sunday.

Portis, the former Razorback and SEC player of the year, finished with a series-high 11 points off the bench for Milwaukee, which took Game 3 from the Phoenix Suns 120-100 to pull within 2-1. He has now reached double figures in three of the Bucks’ last five games.

“I’m just playing with passion, going out there and being who I am,” Portis said in an interview on ESPN. “I’m bringing some scoring off the bench and just being myself. I think Coach (Mike Budenholzer) and his staff have done a great job of just letting me be me.”

The 6-10 forward shot 4 of 11 from the floor and 1 of 3 from three-point range, but he made his greatest impact on the backboards. In addition to his 11 points, which led all Milwaukee reserves, Portis grabbed eight rebounds — second on the team to Giannis Antetokounmpo’s 13.

His four offensive boards were a playoff career-high, and they led to critical second-chance points. In the third quarter, Portis rebounded a left-corner three-point miss by Bucks guard Pat Connaughton and found Jrue Holiday on the right wing for a three to put Milwaukee up 80-71.

Portis’ final rebound of the game came less than 20 seconds later. Sandwiched between multiple Suns players, he grabbed a Holiday miss from the top of the key and drew a shooting foul.

Prior to stepping to the free throw line, Portis ignited the home crowd with a show of emotion, and fans soon began chanting his name. He made both free throws to push him into double figures.

The Bucks finished with a 20-2 edge in second-chance points in the win.

“That’s been a strength of ours all postseason,” Portis said of Milwaukee’s offensive rebounding. “That’s what we’ve done to get second-chance points, second-chance opportunities. Just playing with some swag, playing with confidence.

“We can muck the game up a little bit more, too, as well and crash the glass and get some easy ones.”

Portis saw the floor for a combined 18:53 in the first two games of the series and scored 7 points on 3 of 7 shooting. He played 18:17 on Sunday, and Milwaukee outscored Phoenix by 19 points in that span.

It is his best plus/minus figure in 23 career playoff games.

Each of Portis’ field goals came in the first half, and he got on the board in the first quarter with a floater in the lane. Thirty-three seconds later he was the recipient of an Antetokounmpo pass and added a dunk after cutting along the baseline.

With 1:49 remaining in the first half, Portis punctuated a Milwaukee transition opportunity with a one-hand dunk, then he knocked down a right-corner three on the Bucks’ next possession to push their lead to 58-45.

“This is the NBA,” Portis told reporters. “Nobody is going to feel sorry for you in the NBA. You play two minutes, you play 30 minutes, 40 minutes, have a good game, bad game, it’s a next-day mentality. When 12 o’clock hits on a game day, it’s over with, man, and time to focus on Game 4.

“I don’t sit and sob or get mad or anything about not playing. I want to win. I came to Milwaukee to try to impact winning and be the best Bobby Portis I can be.”

Game 4 is scheduled for Wednesday at 8 p.m. on ABC.