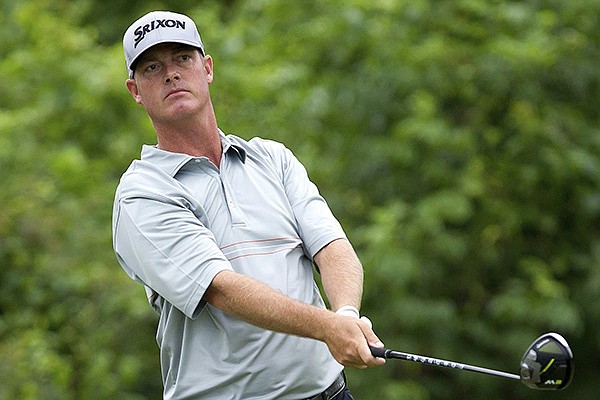 There have been three phone calls to Bill Woodley over the last 24 years to discuss one of his great recruiting gems in his time as Arkansas men’s golf coach.

The question when Tag Ridings made a big splash on the PGA Tour: Are you surprised?

The answer is always the same: Nope, the sky is the limit if Ridings could play pain free.

That exchange happened Monday morning after Woodley was reached in his retirement home in Rockport on the Gulf Coast of South Texas. He’s either chasing big redfish or polishing his golf game in hopes of winning a third club championship after the age of 70.

Woodley has always had a tough time separating his golf from his fishing. He was the college golf coach who carried a spinning rod down the fairways as he watched his players compete. There might be a bass swimming near the edge of the fairway.

There was more time to fish than coach if he was walking with Ridings. He didn’t worry about what Ridings was going to do on the course or in the class room. He was academic All-America and three times All-SEC on the course.

“He was my Tagamet,” Woodley said. “He calmed my stomach. Never got any stress from Tag. He was rock solid.

“I knew one thing: he wasn’t ever going to spit the bit if he could get in contention.”

The problem has been that Ridings, 46, just hasn’t put himself in contention enough on the PGA Tour. He earned his second victory on the PGA Tour’s secondary circuit Sunday. He won a three-way playoff at the TPC Colorado Championship at Heron Lakes just outside of Berthoud.

His first victory came in 2002 in the Permian Basin Open. He also had a second-place finish in the 2004 Las Vegas PGA Tour stop. Those are the highlights in 477 Tour-sanctioned starts.

No doubt, there would be more highlights except for assorted back, shoulder and arm injuries during his Tour career.

“Had he stayed healthy, everyone would know his name,” Woodley said. “I remember when he outplayed Tiger Woods in college at Olympic Club to win.”

Ridings recalls that final day pairing for one of his college victories. He was paired with Tiger.

“I think I was a junior and it was one of the final events Tiger played before he went pro,” Ridings said. “Tiger didn’t fare well. It was a humbling experience.”

Ridings didn’t say for whom. For sure, Ridings is humble. Inducted in the 2019 University of Arkansas Hall of Honor, the Tulsa native is low key and quiet.

There are great memories of his days as a Razorback and pride about his accomplishments under Woodley. He talks about his college coach with great admiration and gratitude.

“He took me when no one else was recruiting me,” Ridings said. “He came to see me play in the Oklahoma state match play. I lost and he still wanted me.”

The back story isn’t just that Ridings lost.

“He was way down to a good player and Tag came storming back,” Woodley said. “It upset him that he didn’t win and I liked the kid because I saw a little bit of a mean streak and winning was important.

“He had great instincts. Nothing overwhelmed him and you saw that day when he played with Tiger and won. Not many have done that — ever.”

Ridings doesn’t recall the state amateur opponent, but does remember the match.

“I was five down after eight holes,” Ridings said. “I got it back to one down and we went 18 holes. And there was Coach Woodley waiting to talk to me when I was done. I didn’t have any options until then.

“I think Memphis eventually called, but it wasn’t a scholarship and it was too expensive. Then, the day after I signed for my scholarship at Arkansas, I got another call.”

It was Oklahoma State coach Mike Holder. He offered a walk-on spot with the No. 1 Cowboys.

“If he had called me earlier, I’d probably done that,” Ridings said. “But at that time, I’m not sure how smart that would have been because they had six All-Americans on their team. You can only play five. That would have been a tough lineup to crack.”

Tough is the right word for Ridings. He was a staple in Woodley’s lineup on a good team.

“Plenty tough,” Woodley said. “He has always been long, but his body just doesn’t hold up. But he’s never stopped trying. And he was never scared of anything.”

Ridings and wife Brenda have three kids, the oldest now 14. There have been almost $3 million in career winnings, but it’s an expensive game with travel.

“I am seriously thrilled with this win,” Woodley said. “I say that because Tag has worked so hard. He won’t give up. He won’t stop grinding and it’s a hard, tough life on Tour.

“He has a great attitude. I saw the picture of Tag and Brenda holding the trophy and it just made me feel so good because I know how hard he works and what he’s gone through to stay on Tour.”

“She’s only gone with me three times,” Ridings said. “The only other two were when I played in the Bahamas and she said, ‘I’ll go there.’ She’s getting onto me now for telling you that, but it’s the truth.

“This time she said she’d go because I was having trouble with getting a caddie. I’ll say this: she has a pretty good record as a caddie. There is a win and a top 20 in her three times out with the bag.”

The main thing the caddie has to keep up with is the lead tape. Ridings is the king of lead tape on the PGA Tour. The account on PGATour.com says his nickname is Lead Tape.

“It’s really not, but they should call me that,” Ridings said. “I’m always working on my clubs. Every club in my bag — and that goes for my putter, too — has lead tape on them.

“I put it on, take it off. I’m tinkering all the time. It is common for guys on Tour to use lead tape, but I’m way past common with what I do. I’ve been the mad scientist with lead tape for about the last 10 years.”

It starts with what he calls an uncommon build for a PGA Tour player.

“Most of these guys have long arms,” he said. “What really works is the short guys with the flat swings. Those guys can hit some amazing wedges.

“I’m tall with short arms, backward. I finally figured out that I needed longer clubs than standard. It helps give me some great leverage and adds to my (ability to hit for distance). But it is bad on my body.”

Oh, and Ridings does hit it long. Even at 46, he’s among the longest on the Korn Ferry Tour. He averages 306.4 yards. That came in handy this week on the longest course the pros will play this season. TPC Colorado measures 7,991 yards.

It’s in the East Slope of the Rocky Mountains, at an altitude of 4,992 feet. The par-5 13th measures 773 yards. He was hitting past everyone in his pairing over the final holes.

Ridings was playing a bombers course with bombers, but that’s OK. He’s a bomber, too — if his body holds up.

“Golf is all about the ability to rotate the body,” he said. “It puts stress on your spine, rotator cuff and the hip joint. My dad (a retired golf pro) has a bad back, too, and he’s got the same body.

“The first time one thing doesn’t turn, it means one of the other three is going to give out.”

Ridings said it happens to him almost every season. He’s had long stretches where he couldn’t play.

“I’ll go about four months good, then something goes out,” he said. “I spend a lot of time — sometimes four days a week — with a chiropractor.”

Despite the injuries, Ridings has always kept his mind right. However, just in the last few months, doubts hit.

“You know you have to provide for the family, the things you want for your family and for their future,” he said. “I was about to the point where I had no place to play next year. You don’t want to be on one of those mini tours where the entry fee is $1,000 and you are going against those guys right out of college. They can play.

“I’ve tried not to think about (giving up on the PGA Tour dream) my whole life,” Ridings said. “But I admit I was thinking that way of late. It got real and that was new for me.

“But with this victory, I’m going to push that out of my mind again. Playing well changed that.”

As for closing out the victory in the playoffs, Ridings said there is always pressure.

“I know Coach Woodley has always said I handle the pressure,” Ridings said. “That always has given me confidence. I’ve done it a few times and a few times I didn’t close it out.

“What I’ve always said is that if I get in contention and my tempo is right, I’m going to play well. Coach Woodley’s comments always built up my confidence.”

It’s still there. No doubt, if the body holds up, the mind will do just fine.