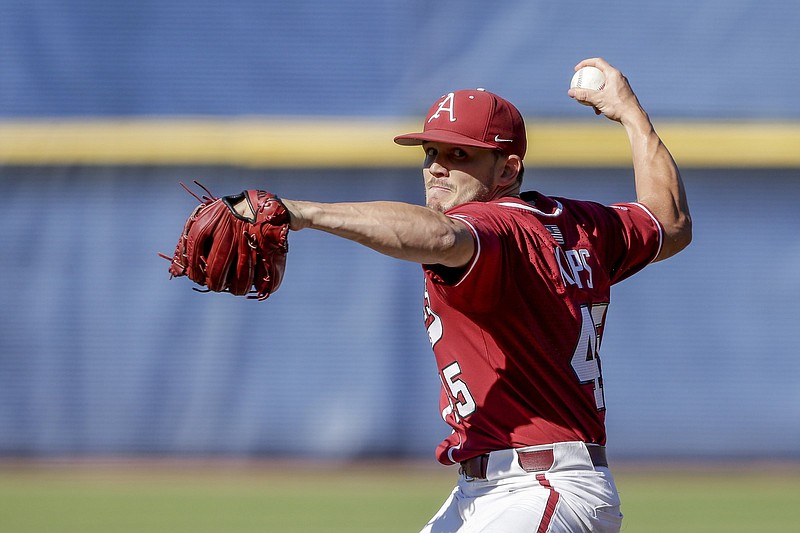 FAYETTEVILLE — The selection of Kevin Kopps, the Dick Howser Trophy winner and college baseball’s best pitcher, highlighted a busy day of activity for the University of Arkansas on the second day of the Major League Baseball Draft on Monday.

Kopps was taken with the 99th pick in the third round of the draft by the San Diego Padres. The native of Sugar Land, Texas, led the nation with a 0.90 ERA and a 0.76 WHIP, and he posted a 12-1 record with 11 saves. The SEC pitcher of the year is a finalist for the Golden Spikes Trophy along with Vanderbilt pitchers Jack Leiter and Kumar Rocker, who were chosen with the No. 2 and No. 10 picks in the draft, respectively, on Sunday.

Kopps was one of six current Razorbacks, all expected to sign professional deals, taken in rounds 2 through 10 on Monday, while two top Arkansas signees were snagged in the third round.

The Chicago Cubs loaded up on players with ties to Arkansas and the Razorbacks, with half of their first eight picks fitting that description.

The Cubs drafted outfielder signee Drew Gray from Swansea, Ill., and IMG Academy with the 93rd pick in the third round after opening their draft Sunday by taking Kansas State pitcher Jordan Wicks, a native of Conway. Gray, whose slot value is $627,900, is the brother of Arkansas pitcher Evan Gray.

Chicago also drafted Arkansas outfielder Christian Franklin with the 123rd pick in the fourth round and catcher Casey Opitz with the 244th pick of the eighth round.

Other current Razorbacks drafted were right-hander Ryan Costeiu by the Los Angeles Angels in the seventh round, left-hander Patrick Wicklander by the Tampa Bay Rays in the eighth round and left-hander Lael Lockhart by the defending World Series champion Los Angeles Dodgers in the ninth round.

The Razorbacks got big news when top signee Peyton Stovall announced early in the afternoon he was taking his name out of the draft because teams were not ready to match his asking price. Later, first baseman and outfielder Brady Slavens (.284, 14 HR, 63 RBI) said he was returning to the Razorbacks for another year.

“After a lot of thought and consideration, I’ve decided to come back to Arkansas for my Junior season!!” Slavens wrote on his Twitter account. “Very blessed and can’t wait to get back to work!! #WPS.”

Arkansas Coach Dave Van Horn, not a fan of the draft being held in mid-July as part of MLB’s All-Star Game festivities, said the coming days will be a whirlwind as he and his staff try to piece together the 2022 roster. That is because they’ll be contacting the drafted signees and current players to determine the probabilities for each of them signing a pro contract.

The Razorbacks’ top drafted signee on Monday was Jordan Viars, an outfielder from Frisco, Texas, who went with the No. 84 pick in the third round to the Philadelphia Phillies. The 6-4, 215-pounder bats and throws left-handed.

“He’s 17 years old, which makes him one of the youngest players in the draft,” MLB Network analyst Jim Callis said. “There are teams that look heavily at age because they think you have more upside if you’re a younger guy.

Kopps, 24, was working with a masterpiece of a season in his corner but not a ton of leverage.

Callis called Kopps a “bargain pick” for the Padres, meaning the expectation is they can sign him below his slot value of $587,400.

“His money pitch is his slider,” said Callis, describing the pitch Kopps called a cutter/slider that baffled hitters across college baseball in 2021. “Coming off Tommy John, so he was a sixth-year college player, 24 years old, best player in college baseball this season.”

The first player drafted Monday with ties to Arkansas was former Ashdown High standout and LSU right-hander Jaden Hill, who was taken by the Colorado Rockies with the eighth pick of the day and No. 44 overall.

Hill was the top prospect in Arkansas in the Class of 2018, but he made just two starts as a freshman in 2019 before suffering a shoulder injury.

Health woes continued to plague Hill throughout his college career. After making four relief appearances in 2020 prior to the covid-19 shutdown, Hill looked to regain form as a starter this spring. But in early April, the 6-4, 234-pounder suffered a torn right ulnar collateral ligament, ending his junior campaign with Tommy John surgery.

There’s still a belief that Hill, the No. 8 prospect for the draft by Baseball America prior to his latest injury, can excel in the pros. He sports a fastball that sits 95-97 mph and can touch 99 to go along with a nasty wipeout slider. Even if Hill doesn’t make it as a starter in the professional ranks, he could give the Rockies a lift out of the bullpen.

Franklin was a preseason All-America choice who played great defense as a junior and showed flashes of brilliance at the plate before struggling down the stretch to finish with a .274 average, 13 home runs and 54 RBI.

Wrote Kendal Rogers of D1Baseball.com: “Swing and miss in his swing caused Christian Franklin to drop to the fourth round to the Cubs, but I love his upside. Has consistently gotten better defensively and has some serious pop in his bat.”

Said Callis, “He’s got more upside than a lot of the college guys in this draft. A really athletic kid with … a lot of bat speed and strength [and] a nice launch to that swing.

“I think he sticks in center. He’s got some arm strength. The question is he’s got some swing and miss. If he hits consistently, this is a steal in the fourth round.”

“He’s one of the best catchers in college baseball on the defensive side,” he said. “He can really receive. He’s got a strong arm with a quick release. The bat’s a little bit light but he showed more pop this year. Pitchers love throwing to him. I think he’s a definite big-leaguer, at least as a backup.”

“We’ve been talking how the SEC is the best conference in college baseball: Jack Leiter, Kumar Rocker, all kinds of guys,” Callis said. “The starter who led the SEC in ERA was Patrick Wicklander.

“It’s not sexy stuff but he mixes it real well. Throws 92-93 usually on the fastball and some up to 96. He’s got some deception. He’s got a sweeping slider to shut down lefties.

“He’s got a low 80s changeup. Throws strikes. He hides the ball well in his delivery and has low release height. Hitters have a tough time catching up to his fastball.”

Lockhart (3-3, 4.47 ERA) led the Razorbacks with 14 starts after coming over as a graduate transfer from Houston.

Multiple scouts reached out to the MLB Network crew to drop information on Lockhart.

“He’s a pitch-ability lefty who goes 90-94 [mph] with his fastball,” Callis said, quoting from scouts.