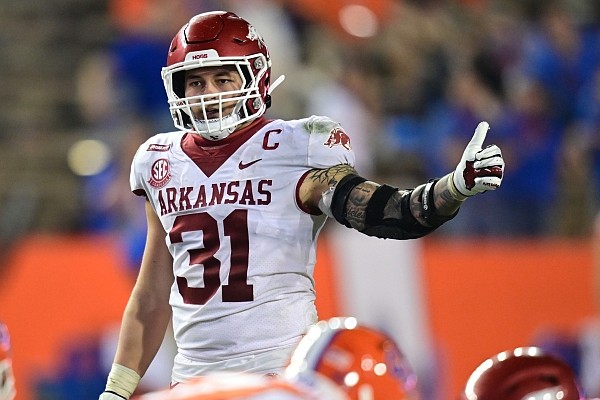 Arkansas linebacker Grant Morgan gives a thumbs up prior to a play during a game against Florida on Nov. 14, 2020, in Gainesville, Fla.

FAYETTEVILLE — Arkansas coach Sam Pittman will be accompanied by a pair of seniors at SEC Media Days in Hoover, Ala., next week.

The Razorbacks’ player representatives for this year’s event are offensive lineman Myron Cunningham and linebacker Grant Morgan, it was announced Wednesday. Both players are taking advantage of the extra year of eligibility provided by the NCAA due to covid-19.

Pittman, Cunningham and Morgan are scheduled to begin making the rounds July 22 at 10:30 a.m.

Entering his third season at Arkansas after transferring from Iowa Central Community College, Cunningham has started 20 of 21 games played with the Razorbacks, including all 10 in 2020. He played a team-high 705 snaps last season and allowed two sacks.

Morgan, a native of Greenwood, is coming off one of the best seasons by a defensive player in program history, finishing with 111 tackles in nine games. He was a first-team All-SEC selection by The Associated Press and the league’s coaches, and a second-team All-American by Walter Camp and the American Football Coaches Association.

The former walk-on also recorded 7.5 tackles for loss, 2 sacks and 1 interception, which he returned for a touchdown against Ole Miss.