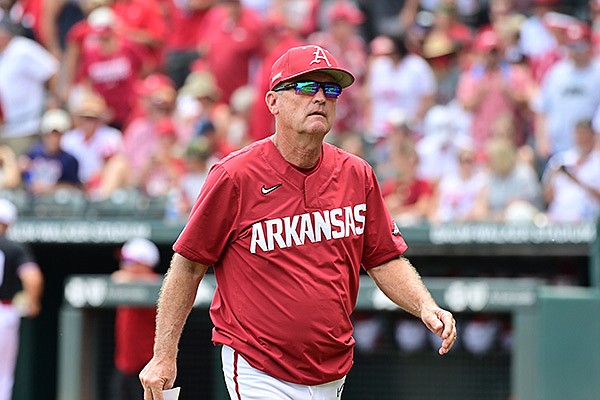 Battles announced his return to the Razorbacks on Tuesday, a somewhat unexpected development for a player who was ranked as the No. 221 prospect entering the 20-round Major League Baseball Draft.

“After all the thoughts and talks with my family and coaches I have decided to return to Arkansas for my junior season,” Battles announced on his Twitter account. “Thank you to everyone who has supported me throughout this process. I know this is God speaking to me and I’m in his hands.”

Battles was thought to be a likely second-day MLB Draft pick within the top 10 rounds after hitting .269 with 6 home runs and 43 RBI as one of the Razorbacks’ most clutch hitters this season, But he was not taken in the 20 rounds, which wrapped up Tuesday.

Van Horn, in a season-wrap video conference on June 23, said he had been joking around with Battles about Van Horn’s No. 2, the same number Battles had worn before switching to No. 4 with the Razorbacks in 2021.

“Battles, I was texting with him last night and he’s always kidding me because he wore No. 2,” Van Horn said that day. “He said, ‘Coach, you going to give up No. 2 next year?’

Van Horn followed that anecdote by saying, “But I don’t see him coming back. I just think the pro people like him a lot. They like his size and the way he plays, so we’ll see how that turns out.”

“He’s just had such a great time there at Arkansas,” Fred Battles told WholeHogSports.com. “We actually had a couple of teams in the third and fourth rounds that wanted to draft him, but the money just wasn’t where we wanted it to be.”

Arkansas signees Peyton Stovall, Braylon Bishop and Drake Varnado all plan to enroll in school and join the 2022 Razorback roster. Stovall, a shortstop from Haughton, La., pulled his name out of the draft early in the second round, saying his asking price for signing was not being met and he preferred to attend school.

Bishop, rated the No. 88 prospect by Baseball America, was drafted by the Pittsburgh Pirates with the first pick of round 14 on Tuesday. The outfielder from Arkansas High in Texarkana is angling to replace Christian Franklin, a fourth-round pick by the Chicago Cubs on Monday, as Arkansas’ center fielder.

“I will for sure be at Arkansas and my goal is to just go up there and try to take over where Franklin has left off,” Bishop told WholeHogSports.com after the draft. “I think that is what I will do and I’m excited.”

Varnado, a shortstop signee from Port Neches, Texas, was taken by the Arizona Diamondbacks with the 498th pick of the 17th round.

However, the IMG Academy product enrolled in summer classes at Arkansas after moving to Fayetteville in June.

“I would like to thank all the clubs that showed interest in me over the past couple days,” Varnado wrote on his Twitter account prior to being drafted by Arizona. “I’ve already made it home on the Hill and excited for the years to come. Razorback nation let’s do it!”

The return of Battles along with team RBI leader Brady Slavens adds to a nucleus of talent to give the Razorbacks the makings of a solid core of position players.

Junior second baseman Robert Moore, sophomore infielder/outfielder Cayden Wallace, Battles and Slavens were regular starters for the Razorbacks during a 50-13 season in which they were ranked No. 1 the majority of the season.

Charlie Welch, who hit a team-leading .388 as a top reserve and ace pinch-hitter, outfielders Zack Gregory and Ethan Bates and catcher Dylan Leach all played part-time roles. Welch was drafted with the 564th pick in the 19th round by the Seattle Mariners on Tuesday and his decision on whether to sign or stay is pending.

Additionally, veterans like Matt Goodheart and Braydon Webb are eligible for extra seasons based on the NCAA’s covid-19 allowances.

The Razorbacks have also added transfers in versatile Michael Turner of Kent State, who can catch or play the infield or outfield, and former Oklahoma outfielder Jace Bohrofen.

Draft eligible pitchers Connor Noland and Zebulon Vermillion were not taken in the 20-round draft and Van Horn’s expectations were for both of those right-handers to return.

Day 3 pitcher draftees Caden Monke and Elijah Trest will also have decisions to make on whether to sign or remain in school.