Freshman lineman wants to be there for fans 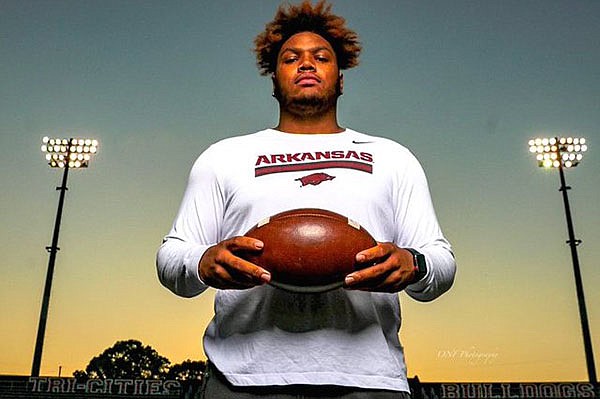 Cameron Ball will be a freshman defensive lineman at Arkansas during the 2021 season. (Photo courtesy Omari Forts, ONF Photography)

University of Arkansas freshman defensive lineman Cameron Ball said he relishes the idea of being someone whom young Razorback fans look up to during his playing days in Fayetteville.

“I was one of those kids, so I know how it feels,” Ball said. “So I’m not going to turn down autographs and pictures.”

Ball, 6-5, 295 pounds, of East Point (Ga.) Tri-Cities, had more than 30 scholarship offers from schools such as Georgia Tech, Tennessee, Arizona State, Illinois, Michigan State, Mississippi State and others before signing with the Hogs.

Ball At a Glance

The charismatic and outgoing Ball said he remembers when college athletes made him starry-eyed.

“I know a lot of people look up to NFL players, but me personally I like college better than the NFL,” he said. “I used to look up to a few college football players, and I always wanted to say I wanted to be the next.”

Because of the coronavirus pandemic, Ball didn’t visit Fayetteville before he signed with the Hogs during the early signing period in December. His first look at his future home was in March while attending a spring practice.

Ball got his first dose of what it’s like to be a Razorback during the trip.

“I liked it a lot,” he said. “I took pictures with a couple of fans and talked to a couple of fans. It was a good environment, and it just showed why I was so proud I chose Arkansas over all the other schools I had.”

It didn’t take long for Razorback fans to greet Ball.

“Most of them recognized me when I got to the airport,” he said. “It was like a dream come true to be honest. A few fans asked what my name was and I told them. They got all excited and they asked for a picture.

“I was taking pictures with a lot of people throughout my time visiting. It was an amazing, cool experience and also a humbling experience as well.”

With college athletes now able to profit off their name, image and likeness, players such as Ball have the characteristics businesses look for in a partnership.

“You want to be around Cameron Ball,” Tri-Cities Coach Cuevas Dargan said. “He was just a fun guy to have on the team. He’s just a natural leader. People gravitate to him. He leads vocally, but he leads by example. He does the right things on and off the field, so a lot of kids follow that.”

Dargan said he saw Ball’s leadership skills on display on the football field and off.

“I want to say he gave the opening speech for graduation,” Dargan said. “He led us in prayers before every pregame meal. Inspirational speeches. I know he was also very big in his church. He’s a well-spoken young man. Very personable.”

“I was always a class clown, so I would always crack jokes and just have a fun personality,” he said. “As I got older, I started being more mature and I found out I could use my personality for good. You can use it in other ways in life to put smiles on other people’s faces.”

Strangers are not strangers when around Ball, who looks to uplift anyone’s spirits when needed.

“I don’t even have to know you,” he said. “If I see you and you’re not having a good time or you have a frown on your face or sad face, I’m going to try everything in my power to do something crazy because life is about having fun no matter what you’re doing.”

ESPN rated Ball a 3-star recruit, the No. 39 defensive tackle in the nation and the No. 50 prospect in Georgia.

Ball said he knows his play on the field will help elevate his name among fans, but he plans to make sure he has a positive impact off the field, too.

“To be honest, it didn’t shock me much,” Ball said. “Not saying anything bad about Coach LeBlanc. He’s a good guy and I’m glad he offered me and recruited me.

“In high school, I had four head coaches in four years, so me personally a position coach doesn’t mean anything to me. All it means is a new depth chart, fresh start. It’s anybody’s ballgame. That’s what I want. I want to compete. Everything I’ve gotten this far is earned, not given, and now I just have to earn some more stripes.”

He also said he has lofty goals in the classroom and on the field as a freshman.

“I’ll start with academics first. I want to maintain a 3.2 or higher in my whole college career,” he said. “I want to have nothing but A’s and B’s in the classroom. And on the football side of it, I want to make either freshman All-SEC or freshman All-American.

“I want to battle for the second- or first-string defensive line spot. I just want to make an impact and make a great statement in my first year of playing college football that Cameron Ball is no one to push around or mess around with.”