Neighbors, UA agree to contract extension that could last 7 years 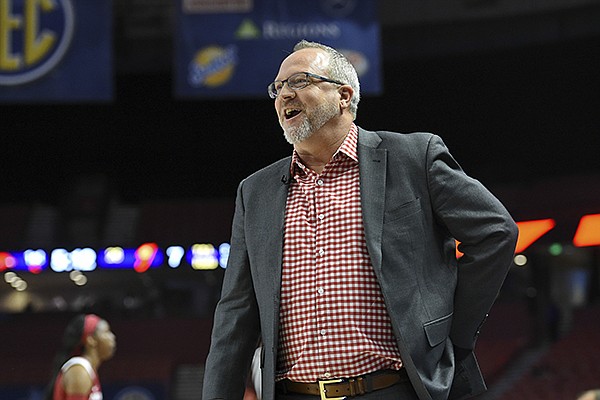 FAYETTEVILLE — The University of Arkansas has extended the contract of women’s basketball coach Mike Neighbors through at least the 2025-26 season.

Neighbors, 52, who this year completed his fourth season as the Razorbacks’ head coach, could earn up to two one-year extensions that would push his agreement through the 2027-28 season.

Those one-year extensions would be earned for each of the program’s next two NCAA Tournament appearances.

Neighbors could earn two $50,000 annual pay raises for NCAA Tournament appearances beginning with the 2023-24 season. His maximum possible annual income is $800,000 under the agreement, before incentives.

Neighbors, a UA graduate, previously worked on an agreement that paid $482,000 per year before incentives. His contract was set to expire in April 2023.

New incentives include stair-step bonuses for NCAA Tournament success, including $75,000 for a Sweet 16 appearance, $150,000 for a Final Four appearance and $300,000 bonus for winning a national championship. Those bonuses cannot accumulate in the same season.

Neighbors could also earn $50,000 for an SEC regular-season or tournament championship, and $25,000 for a conference or national coach of the year award.

If Neighbors is fired by Arkansas for convenience during the extended agreement, he would be owed 70% of his scheduled salary for all seasons remaining on the contract.

Neighbors' agreement includes a no-compete clause that prohibits him from taking a job at another SEC program.

Arkansas played in the NCAA Tournament — a 66-62 first-round loss to Wright State — this year for the first time since 2015. The Razorbacks were likely to make the tournament a year earlier, but the tournament was canceled due to the outbreak of covid-19.

The Razorbacks were 13-17 and 2-14 in the SEC in the season before Neighbors was hired.

“What Coach Neighbors has done in his first four seasons as the head coach of our women’s basketball program has been extraordinary,” UA athletics director Hunter Yurachek said in a statement. “He has guided our team to success in the Southeastern Conference and nationally, while transforming Razorback Women’s Basketball into one of the most dynamic and exciting college basketball programs in the nation.”

Arkansas was ranked as high as No. 10 nationally and was a No. 4 seed in the NCAA Tournament this year. Two Razorbacks, Chelsea Dungee and Destiny Slocum, were selected in the WNBA Draft — the program's first draft picks since 2012.

Both players transferred to Arkansas — Dungee from Oklahoma and Slocum from Oregon State — and are among several notable players to commit to the Razorbacks during Neighbors’ tenure. Neighbors has also recruited transfers Amber Ramirez from TCU and Sasha Goforth from Oregon State, and in the past year signed in-state high school standouts Jersey Wolfenbarger of Fort Smith Northside and Maryam Dauda of Bentonville.

“With his up-tempo style of play, infectious enthusiasm and enduring commitment to Arkansas, Coach Neighbors has captured the attention of fans throughout our state and attracted some of the nation’s very best players to the University of Arkansas,” Yurachek said. “I am excited for the future of our women’s basketball program under Coach Neighbors’ leadership.”

Neighbors was hired in April 2017 at a $600,000 annual salary, but restructured the contract 18 months later to include a provision for the UA to pay the remainder of his $990,000 contract buyout at the University of Washington, where he was head coach for four seasons from 2013-17.

Initially the Razorbacks had agreed to pay $350,000 of Neighbors' buyout, according to his amended contract in October 2018.

Neighbors and Yurachek had preliminary discussions about a contract extension in 2020, both men said last year. Those negotiations were put on hold after the coronavirus outbreak.

“I am grateful for the opportunity to continue living my dream as the head women’s basketball coach at the University of Arkansas,” Neighbors said in a statement. “This meaningful investment in the future of our program is an endorsement of the progress we have made and further validation of our success both in the Southeastern Conference and nationally.

“Additionally, it is a credit to all of the student-athletes, coaches, staff members and fans who have played an integral role in that success. I am deeply appreciative of the confidence demonstrated by Hunter Yurachek and our administration in the direction of our program. It is another example of the strong commitment the University of Arkansas has to elevating our program and positioning us to consistently compete among the elite programs in women’s collegiate basketball.”

Neighbors has a career record of 176-91 in eight seasons as a college head coach. He went to three NCAA Tournaments at Washington, including the 2016 Final Four.

Neighbors grew up in Greenwood and after graduating from the UA began his coaching career at Bentonville High School in 1994.