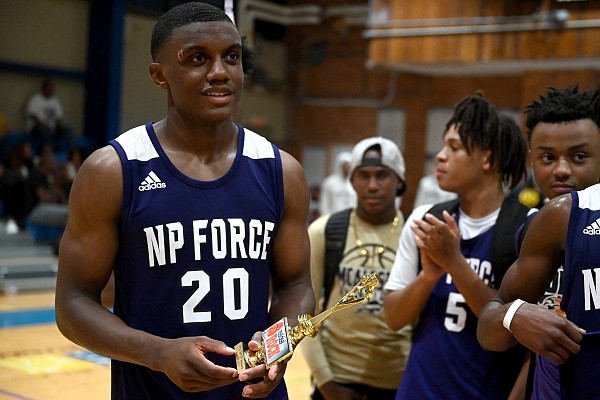 Derrian Ford accepts a trophy for MVP after his team, Next Page Force, won the Real Deal in the Rock 17U Championship game on Sunday, June 27, 2021.

A year ago in this space, I opined the future success of Arkansas’ football, basketball and baseball programs would likely depend a great deal on how those programs fare with loaded 2022 in-state classes in those three sports.

The addition of Magnolia 4-star guard Derrian Ford (6-4, 205 pounds) to the Razorbacks’ basketball commitment list on Wednesday morning – joining Morrilton small forward Joseph Pinion (6-6, 180) and Alabama Player of the Year Barry Dunning (6-5, 205) – is another positive step in that direction.

Ford’s pledge moved Arkansas’ 2022 class to No. 3 in both 247Sports’ and ESPN’s rankings, behind just North Carolina and Ohio State. The Razorbacks’ class is ranked fourth by Rivals.

“I have been telling all the in-state guys what a force we could be if we all make it up to Arkansas,” Pinion said in an earlier interview. “I will continue to push that idea forward and maybe we could be a big part in bringing another national championship to Arkansas.”

Ford’s pledge keeps the in-state momentum the Razorbacks have going. In football, Arkansas has landed eight of 12 in-state prospects who have been offered.

The only ones not on board, as of yet, are Little Rock Parkview linebacker Jaylen White (6-3, 208) and Bentonville wide receiver Chas Nimrod (6-3, 180), who are uncommitted. The Fayetteville duo of wide receiver Isaiah Sategna and linebacker Kaiden Turner have committed to Oregon and Indiana, respectively.

White and Nimrod have made it clear that Arkansas, whose 15-member 2022 class is ranked 18th nationally by 247Sports composite rankings, is in the mix for them.

“(The Razorbacks) are definitely at the top,” White said upon getting his offer from Arkansas in early June. “This is the one (offer) I had been waiting on.”

“I go up there a lot and talk to the coaches to try and learn the offense,” Nimrod said of Arkansas during a break in Wednesday’s Southwest Elite 7-on-7 tournament at Shiloh Christian in Springdale. “Our relationship is really good.”

Little Rock Parkview running back James Jointer (6-1, 210), one of those 2022 football pledges, sees success ahead.

“The home teams are going to reach new heights with most of the top recruits from all across Arkansas staying home to help bring championships to The Hill in all sports,” Jointer said.

The Diamond Hogs have seven in-state 2022 commits, with Harding Academy pitcher/third baseman Kade Smith the latest pledge in a class that is ranked eighth nationally by Perfect Game.

Kade Smith is confident that Arkansas is on the verge of the school’s first baseball national title.

“Arkansas baseball is an elite power house program that has built a rich tradition for success,” he said. “Just in the last five years, it has had over 30 MLB draft picks, two College World Series appearances and won the SEC championship.

“It’s an honor to have the opportunity to be a part of the top-notch development facilities and staff available to work toward the bringing home the first ever College World Series championship.”