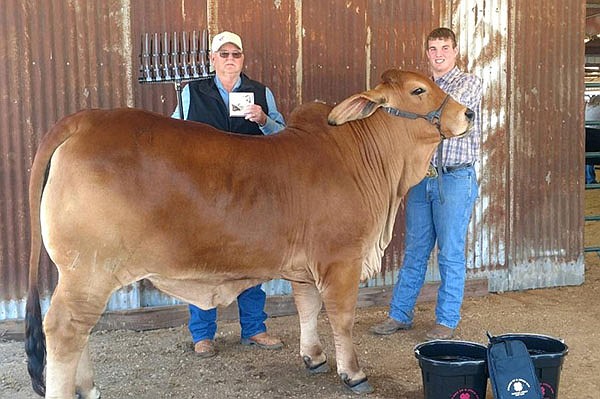 Sonny Belcher said he can count on his hands the number of times his grandson, Cole Carson, has missed a day working on the family’s 400-plus acre ranch over the past 18 years.

As far back as Carson could walk, Belcher remembers the University of Arkansas’ 6-5 freshman offensive lineman by his side on the land in northeast Texas, opening gates, feeding the cows and riding shotgun in his tractor.

Somewhere down the line, Belcher hopes, his grandson will run the place himself.

Carson At a Glance

NOTEWORTHY Carson comes to the Razorbacks as a consensus 3-star recruit. He is the No. 45 offensive tackle in the Class of 2021 and the No. 77 overall prospect in the state of Texas, per Rivals. … He chose UA over offers from Auburn, Ole Miss, Vanderbilt and Arizona, among others. … He played on both the offensive and defensive lines at Rivercrest High School, where he earned first-team all-district honors as a junior. … Carson competed in the shot put in high school.

Until then, the Brahman and F1 cattle ranch can be looked upon as Carson’s breeding ground — the place where he developed the drive that helped him standout at Rivercrest High School in Bogata, Texas, and turned him into a consensus 3-star recruit and the No. 45 offensive tackle in the Class of 2021, according to Rivals.

He carries those values with him to Fayetteville as a freshman member of the University of Arkansas football team.

“I’ve learned a lot of lessons that go towards football from life on the ranch,” Carson said. “Never quitting or giving up. Going your hardest. I learned the will to win and to do your best, and to work hard every day for something you want. It all goes with football.”

Carson grew up within walking distance of the ranch his grandfather began working on more than 50 years ago.

“I was raised up doing it,” Belcher said. “I worked all my life baling hay, running hay equipment, feeding cows. I always had an interest in cows.”

In Carson, Belcher found a grandson who shared his passion for the work. Even at a young age, Carson enjoyed waking up early to check on the calves and staying late to tag the cattle. He picked up lessons on the importance of being on time and working hard from his grandfather along the way.

Carson’s devotion intensified around the time he turned 10, when he went from raising cattle to showing them at stock shows all over Texas. For the next four years, Carson and his family spent nearly every weekend on the road, traversing the state from one competition to the next with a cattle-brimming trailer in tow.

To show cattle successfully, someone has to break them first. For Carson, that tireless, three times daily process forged what former Rivercrest head coach Lance Connot called one of the 290-pound lineman’s greatest traits — his attention to detail.

“You have to start out by getting them used to you just being around them,” Carson said. “Being close to them, touching them, brushing them. Then you end up having to prep them for leading around with your lead rope. You want them to come to you willingly and not fight or resist you. You end up becoming pretty good friends with your cattle.”

To tame cattle also requires a steady hand and loads of patience.

“We’ve had some pretty rank ones,” Belcher said. “You start trying to lead one and they get pretty snorty sometimes. Cole is one of them kind who doesn’t have any quit in him. He always stayed with it.”

Carson’s commitment led to success and trips to some of the state’s largest stock shows in Houston and Fort Worth. Back home in Bogata sits a collection of more than 70 prize belt buckles and trophies he accumulated over the years.

When Carson reached high school, football — and the prospect of playing at the Division I level — became more serious. Showing cattle took a back seat.

“He had to give up one career for another,” Belcher said. “He just didn’t have time for it.”

While his weekends traveling to events across the state were left in the rear-view mirror, Carson kept up his work on the ranch and brought its lessons with him to football.

He approached roadblocks on the field with the same persistence he employed when breaking his cattle. Details such as footwork, hand placement and schemes all received the same attention he gave to his cows. And whether it was Friday night or a sled drill in practice, Carson was always at the front of the line and setting the tone for his team — the responsibility of doing your job well instilled back on the ranch.

“There’s not going to be a guy [at Arkansas] that’s pushing harder than he is to work,” Connot said. “I know that the focus on the details and the competitiveness to win, he’s always carried that everywhere whether he was showing cattle or on the field with us.”