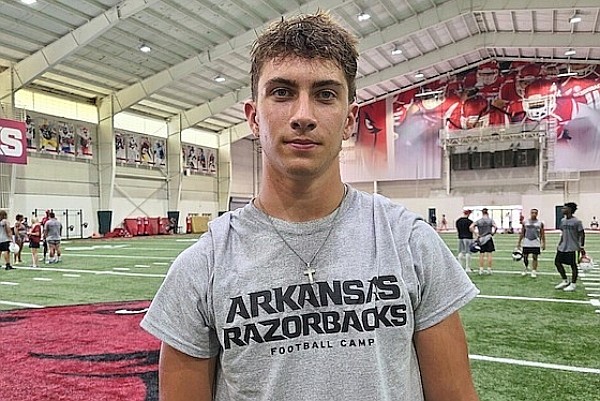 During this week’s Southwest Elite 7-on-7 tournament at Shiloh Christian, Little Rock Christian sophomore Walker White (6-4, 220) showed what the hype is all about.

White already has offers from Tulsa and Central Arkansas despite not yet starting a high school game at quarterback.

He is primed to take over as the starter this fall after leading the ninth grade team to an undefeated record last season and then moving up late in the season and playing wide receiver for head coach Eric Cahu.

“For a rising sophomore, he is very dedicated to being a student of the game. He is very focused and motivated and no one is going to outwork him,” Cohu said. “He is one of the hardest-working guys on our football team, so for a young guy, his level of maturity is very high.

“He is big, but he is also one of the fastest guys on the team. He has an extremely strong arm and already has Division I offers. His success is only going to proliferate. We have just got to get him focused on the team, focused on the team’s success, as he is doing now. The sky is the limit for him.”

White led Little Rock Christian to the quarterfinals of the 20-team Southwest Elite 7-on-7 event, which was won by Heritage Hall (Okla.) with a 21-20 win over Fayetteville in the championship game Thursday afternoon.

He has settled in as a confident leader after a talk with offensive coordinator Johnathan Stone.

“My OC said to me at the beginning of the year to not be nervous when it comes to high school football because I was a freshman and a starting wide receiver in the biggest game of my life so far – the state championship game,” White said of Pulaski Academy’s 64-27 win over Little Rock Christian last December.

“He said to just be myself, and being myself is good enough to win games,” White said. “I have really taken that in and what I have done with my hard work will just follow that up.”

“It’s been so much fun,” he said. “I have been to eight camps and loved every single one of them.

“I grew up an Arkansas fan. Loved going up there (to Fayetteville) and being in front of those coaches. It was so much fun. My options are always open to any college, but it was very cool, just like going to OU and Alabama and any of these other schools.”

“It’s awesome,” White said. “We have always competed with each other and it is so much fun to watch them live out their dreams. I just continue to cheer them on and hope for the best for them.”

White’s great grandfather, Harold “Greasy” Rees, and grandfather, John Rees, both played football for the Razorbacks as did his uncle, John Aaron Rees.

His father, David, played golf at Arkansas in the early 1990s.

White understands he is a developing prospect.

“I feel good overall, but there are always ways to improve,” White said. “I have been injured for a while with my groin and I need to get that healthy and get back to running.

“There’s also my consistency. There are times when I get down on myself and I have been really working on just moving to the next play. I know I also need to get better throwing on the run and I’ve gotten pretty good at that.”