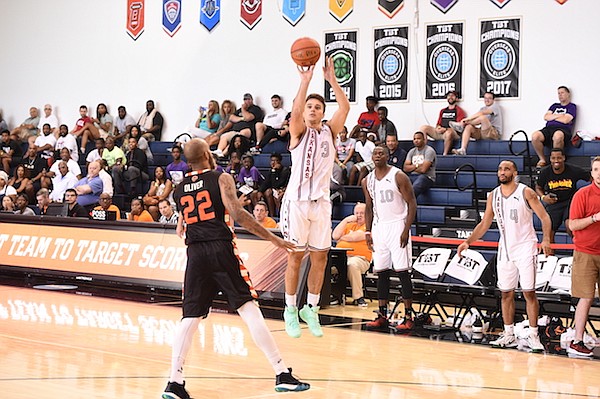 The past five months have been busier than normal for Jacksonville boys assistant basketball coach Monty Patel, but the look on his face after a recent practice session with a team that’s about to embark on a $1 million journey tells a different story.

A few weeks after helping guide the Titans to an appearance in the Class 5A state basketball tournament in March, he began his tenure as head coach of the HoopLife 15-and-under AAU basketball team.

A few weeks later, he was tabbed to lead Team Arkansas in The Basketball Tournament, a nationally televised 64-team, single-elimination event that’s set to begin today.

Team Arkansas vs. Fort Worth Funk

WHAT Wichita Regional of The Basketball Tournament

HOW IT WORKS The tournament, which runs from today through Aug. 3, is comprised of 64 teams using a single-elimination format. There are 16 teams in four regions, with the final eight playing in Dayton, Ohio, to determine a champion. The games are played using nine-minute quarters and are ended by using the Elam Ending. It calls for the game clock to be turned off at the first whistle with up to four minutes remaining in the contest. The teams then play to a target score, which is eight points more than the total points of the team that’s leading the game. The first team to meet or exceed that score wins. Players are disqualified on their sixth foul.

NOTEWORTHY The team that wins the tournament will receive a $1 million prize. … Guard Jaylen Barford of Team Arkansas is ranked as the No. 1 player in the Wichita Regional by TBT organizers. … Team Arkansas guard Dusty Hannahs will take part in the winner-take-all 33-point contest, where he has a chance to win $33,333. In the event, one player from each of the 64 teams in the tournament will compete against the other in a bracket-style format. The first competitor to hit 11 three-pointers advances. The finals will be held Aug. 1.

And in his spare time, he helps University of Arkansas guard Davonte Davis with his name, image and likeness (NIL) endeavors, a change that was recently allowed by the NCAA.

But Patel did not seem frantic Wednesday at Team Arkansas’ final workout ahead of today’s 1 p.m. matchup with the Fort Worth Funk in the opening round of the TBT in Wichita, Kan. If anything, his attitude was about as tranquil as it gets.

“I don’t know if I’ve really gotten a chance to process everything that’s gone on,” he said. “To me, [coaching Team Arkansas is] just another opportunity that I’m grateful for. Even though I’m busy and stressed, and at times unable to just worry about myself, I’m still thankful for the opportunities that I have.

“Hopefully that leads to even more opportunities in the future for me. But right now, things have been fun because I get to do what I love, which is coach basketball.”

The TBT — which is televised on ESPN and ESPN2, and streamed on ESPN3 — has grown exponentially since it debuted in 2014 with just 17 fans watching its initial game in Philadelphia. High-level talent, ranging from former college standouts to former NBA players, play for a variety of teams.

As interest increased, so did the prize money. A $500,000 pot was up for grabs seven years ago before it was upped to $2 million from 2016-19. Last year, the winning purse was set at $1 million, which will be what Patel and his roster of former players with Arkansas ties will be vying for starting today.

“We’re all ready to go out here, compete and win some money,” said former Razorbacks guard Dusty Hannahs, who’s played professionally both overseas and in the NBA since leaving Arkansas in 2017. “For me, it’s exciting any time I get to put on a uniform and go to battle. I’ll get a chance to play with some of my former teammates, so it’s really cool.

“To see old friends, old faces, talk about old times, and then for us all to come out and do what we love is an amazing feeling.”

Hannahs is one of seven players on this year’s team who suited up for the Razorbacks. The others are Cortney Fortson, Jaylen Barford, Dustin Thomas, Arlando Cook, Hunter Mickelson and C.J. Jones. Jimmy Whitt was also set to play but decided to opt out earlier this month to concentrate on other opportunities. Another former Arkansas player, Sonny Weems, serves as the team’s general manager.

The other four players on the 11-man roster are Josh Hagins, a former All-Sun Belt Conference player at the University of Arkansas at Little Rock; Hamburg native and Southern Illinois alum Kavion Pippen; ex-Memphis and University of Mississippi guard Markel Crawford; and 2020 NAIA Player of the Year Chris Coffey of Georgetown (Ky.) College.

“I was actually surprised at how quickly they got along and how bad they wanted to play together,” Patel said about his team. “They bought in from Day One. There was no in-between on anything. Sonny said what he needed to say to them, and he let us coaches have the reins and do whatever we needed to do.”

“I think we gained a lot of respect from these guys, too, just in terms of what we got ready with scouting reports and things like that. I’ve got two great assistants in Brock Widders, who’s at the University of Central Arkansas, and Carter Vance at Sunrise Christian (Kan.) Academy. And the players see that we’re working just as hard as they are, and I think they really appreciate that.”

Team Arkansas is 1-2 in two previous appearances in the TBT. Its lone victory came in 2018 when Hannahs was a member of the group that beat the Tim Thomas Playaz 85-62, then lost its second-round game to the Talladega Knights 91-74. In 2019, it dropped a 76-60 decision to Louisiana United in the first round. Team Arkansas didn’t play in 2020 after covid-19 began to spread throughout the country.

Barford has experienced a great deal ofsuccess in the tournament, making the all-tournament team when he guided his hometown Jackson TN Underdawgs to the quarterfinals in 2019.

He’s made the switch to Team Arkansas, but the objective remains the same.

“The goal is to try to go out and win that money,” said a laughing Barford, who’s also been playing internationally. “I know it’s been a long time coming, but to be able to play with Team Arkansas and all these guys, I feel like I’ve come back home a little.

“I think we’ve got some great pieces, though, and will do well. My TBT record is over .500, so I plan on keeping it that way.”

Patel doesn’t have a whole lot to go on to prepare for what will be thrown at his team, but he anticipates seeing a great deal of movement from any team.

“Offensively, we’re expecting a lot of ball screens and pin downs,” he said. “We went through the different types of coverages we want to have for every action we’ll see. We’ve been working on a scouting report for three weeks on this team we’re about to face as well as the others that are in our Wichita Region. So we’re ready to go.

“We’ll see some unexpected stuff for sure, but these guys have played high-level basketball and have seen it all.”