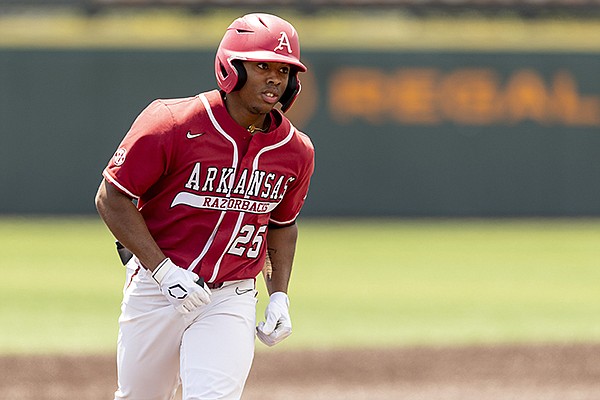 Arkansas center fielder Christian Franklin runs the bases after hitting a home run during a game against Tennessee on Saturday, May 15, 2021, in Knoxville, Tenn. (Photo courtesy Tennessee Athletics)

Franklin, a junior who started the previous two seasons, was a fourth-round pick by the Cubs on Monday in the MLB Draft and No. 123 overall.

Franklin was voted by SEC coaches to the conference's All-Defensive Team and also was a second-team All-SEC pick in the outfield.

Callis also reported that Razorbacks catcher Casey Opitz signed with the Cubs on Friday for a $90,000 bonus. He was an eighth-round draft pick and went No. 244 overall.

A three-year starter for Arkansas whom the coaches trusted to call almost every pitch, Opitz batted .257 last season with 2 home runs, 9 doubles and 18 runs batted in. He drew 33 walks, which helped him have a .367 on-base percentage.

Opitz also was perfect on six stolen base attempts and threw out 11 of 32 runners attempting to steal.

Carlos Collazo, who covers the MLB Draft for Baseball America, reported Razorbacks left hander Lael Lockhart signed with the Los Angeles Dodgers for $2,500. The slot value for the 282nd overall pick is $149,800.