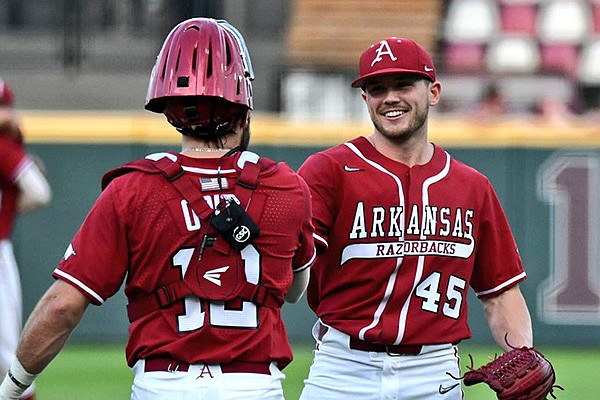 FAYETTEVILLE — The battery that powered Arkansas’ SEC championship season was not supposed to be so long lasting.

The Razorbacks would not have won the SEC — they might have not come close — if not for the pitching of Kevin Kopps and the catching of Casey Opitz.

Together they provided the Razorbacks with a firm anchor late in many close games. Kopps won 12 games and earned 11 saves during the most decorated season ever for an Arkansas player. Kopps won the Golden Spikes Award on Thursday to sweep national player of the year awards.

Sixteen of Kopps’ decisions came during regular-season conference games or at the SEC Tournament. Kopps pitched in 20 games against SEC teams and Arkansas went 19-1 in those games.

For a generation, the great Arkansas pitchers will be measured against Kopps’ final campaign. It was baseball’s equivalent to the seasons when Darren McFadden was a Hesiman Trophy finalist, or when Corliss Williamson led the Arkansas basketball team to a national championship.

It was probably the greatest season ever by a Razorback baseball player. Only Kopps and Andrew Benintendi in 2015 have won national player of the year awards at Arkansas.

Kopps provided starter innings over the course of multiple appearances each weekend. It was almost expected that Kopps would pitch three innings in the first and last games of a series.

As the season went along, the outings became longer and the feats became more astonishing. Just when you thought you had seen Kopps pitch to his limits, he found something else in the tank.

He pitched 4 1/3 innings to close the May 7 finale against Georgia, two days after he shut down the Bulldogs for three innings. He threw in three consecutive games against Auburn and pitched four innings sandwiched around an hour-plus rain delay at Mississippi State.

Then there was the postseason, when Kopps’ Herculean effort brought the Razorbacks within one win of the College World Series. He pitched a combined 23 1/3 innings over five appearances during the NCAA Tournament, and didn't allow a run until the final game, when he started and pitched into the ninth.

“His mentality is what makes him as good as he is,” Arkansas coach Matt Hobbs said. “He doesn’t come into a game and think, ‘I’ve got to get nine outs.’ He approaches it like, ‘I’ve got to get one out nine times.’

“He doesn’t hunt punch outs, even though he gets them. He’s like the ultimate out getter. He is consumed with, ‘How do I get this guy out?’”

Nearly every team struggled with Kopps’ go-to offspeed pitch. He called it a cutter, but it looked like a slider with its movement away from right-handed hitters and that ran in on lefties.

The pitch — an “alien” as described by Hobbs — caught the attention of many around baseball. Rob Friedman, who runs the @PitchingNinja Twitter account that focuses mostly on professional baseball, tweeted after nearly every appearance by Kopps.

Kopps’ ability to bury his cutter was made possible by the great play of Opitz. Kopps did not throw a single wild pitch in 56 2/3 innings against SEC teams, despite the fact that roughly two in every three pitches were intentionally thrown near the batters’ feet.

Kopps was the national player of the year, but he might not have been without Opitz's superb work behind the plate.

“The funnest thing I’ll probably reflect on at the end of this run is those two guys working together,” Hobbs said. “I very rarely go out and visit the mound when Kevin pitches…but you can just see the synergy in how those guys work together.

“You really get yourself caught up just enjoying how well they work together. I don’t know if you have Kevin without Casey…in terms of they just mean so much to each other.”

Opitz and Kopps wound up back at Arkansas after disappointments in 2020, which was supposed to be a draft leverage year for both players. Opitz was a true junior last year, while Kopps was a fifth-year junior due to a redshirt season and a medical hardship after Tommy John surgery that caused him to miss the 2018 season.

The covid-19 outbreak shelved pro ambitions for a year. Opitz was not offered the right money in the five-round 2020 MLB Draft, and Kopps had no chance of being drafted after he struggled with his command in the games the Razorbacks were able to play before the shutdown. Kopps finished the 2020 season with an 8.18 ERA in 11 innings.

This week Kopps was drafted in the third round by the San Diego Padres. Opitz was an eighth-round draft pick of the Chicago Cubs.

Kopps spent the time away from baseball last year reshaping his body and the pitch that made him the college game's most envied pitcher. He changed from a four-seam fastball to a two-seam fastball that created 10 to 12 inches of depth to his cutter.

“It was ridiculous how he could manipulate that baseball to make the best hitters in the country look very feeble,” Arkansas hitting coach Nate Thompson said. “I’m glad we didn’t have to face him this spring.”

Arkansas’ hitters marveled at the pitch when they would come back from facing Kopps during the fall, but it still took a few more months for Kopps to perfect it. Once he did, he took college baseball on an unforgettable ride.

“I think he still made another jump in the spring,” Thompson said. “He was really good in the fall, but it was like there was another level he went to.

“He was like the ultimate weapon. Whenever we needed to call on him, he would come in and put the fire out. When he came in the game, it was like game over. If we were down a run or a tied game, it was like, ‘Oh, we’re winning now. They’re not scoring.’ It would give us another boost.

“I’ve never seen a guy as dominant as that.”