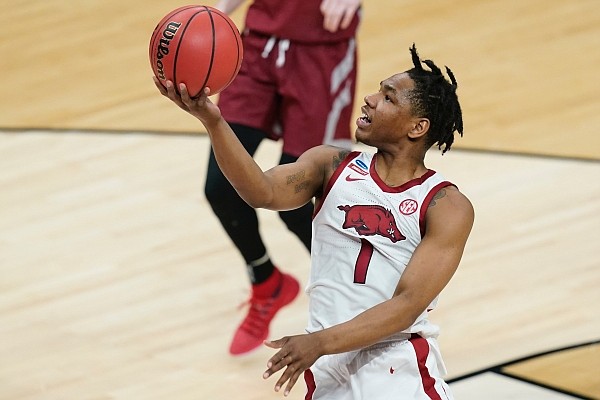 Arkansas' JD Notae (1) puts up a shot during the second half of a first round game against Colgate at Bankers Life Fieldhouse in the NCAA men's college basketball tournament, Friday, March 19, 2021, in Indianapolis. (AP Photo/Darron Cummings)

“He tells me he loves it,” Castle said.

Castle, 6-6, 200 pounds, of Covington (Ga.) Newton, has 11 other scholarship offers from schools such as Auburn, Florida, Ole Miss, Vanderbilt, Miami, Georgia Tech and Connecticut. The Razorbacks offered him on June 23.

“He really likes them,” he said. “He tells me they’re great coaches.”

Castle is enjoying his developing relationship with the Arkansas coaches.

“It’s going pretty smooth. They reach out a lot,” said Castle, who’s being recruited by Arkansas as a combo guard. “They show high interest in me. They check up on me sometimes, not even about basketball stuff – about life.”

“I realized they’re one of the only schools starting all those freshmen, so that’s definitely something to look into,” he said.

Castle averaged 13.8 points, 5.2 rebounds, 3.8 assists and 2.3 steals while shooting 41% from the three-point line as a sophomore. ESPN rates Castle as the No. 29 shooting guard in the nation and the No. 6 prospect in Georgia for the 2023 class.

Several prospects have called Musselman and his staff genuine. Castle agrees with that assessment.

“They seem like really cool people,” he said. “Like the fact they check up on me about not even about basketball stuff all the time. You can tell they’re actually genuine people.”

Castle uses his vision to get teammates involved.

“I can score the ball, but I like to get my teammates the ball,” he said. “I feel like it’s one of my underrated skills. I guard the ball really well, even at my height.”

His father Stacey was a guard for Wake Forest and Central Florida in the early 1990s and coaches his son’s 16-under Atlanta XPress team on the Under Armour Association circuit. The younger Castle understands the benefits of spreading the ball around.

“If you get your teammates involved, it opens up the floor and then you can start doing whatever you want and makes everything easier,” Castle said. “I play with a couple of highly regarded guys, so I’m not the only person and I don’t have to do it by myself. It makes it easier on me when I just feed them the ball and get them in the right spots.”

Castle, who visited Georgia on June 29, is looking to make his way to Fayetteville for a visit.

“I think my dad is going to set that up some time in August or after that, but I know I will definitely be going up there one day,” Castle said.

Ole Miss and Auburn also are on his list of schools to visit.

“I think I might be going to UConn, but I’m not sure yet,” he said.