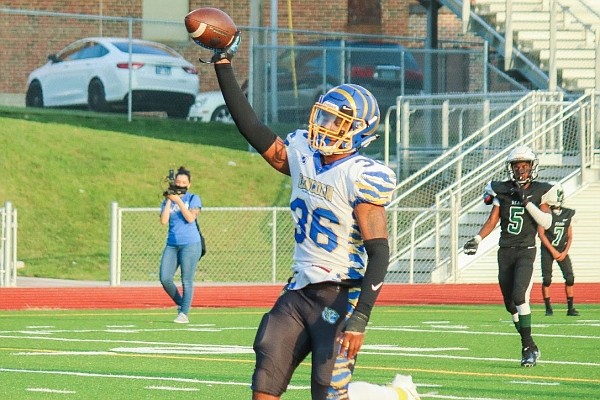 FAYETTEVILLE — Jermaine Hamilton-Jordan took a break from summer workouts in early June at the University of Arkansas to return home to Kansas City, Mo., for his high school graduation.

The freshman defensive back who was an early enrollee at Arkansas in January went through graduation ceremonies with his fellow seniors from Lincoln College Prep at Arrowhead Stadium — home of the NFL’s Kansas City Chiefs.

“It was great to graduate at Arrowhead,” Hamilton-Jordan said. “One day I hope to be playing on the field there.”

Before Hamilton-Jordan can try to live his NFL dream, he has a college career on which to focus.

NOTEWORTHY Rated a 3-star recruit by 247Sports, Rivals and ESPN. … Rated the No. 8 player in Missouri by ESPN. … Early enrollee at Arkansas who played linebacker in high school, but worked at nickelback in the spring. … Had 91 tackles, including 17 for lost yards, 2 interceptions and 1 fumble recovery as a senior. … Also played running back last seasons and rushed for 441 yards and 7 touchdowns, and had 7 catches for 111 yards. … As a junior had 150 tackles, including 18 for lost yards, with 1 interception and a forced fumble. … Chose Arkansas over Kentucky, Iowa State, Kansas State, Kansas and Washington State, among others.

“It was fun to be home for graduation, but I was ready to be back up here to campus,” he said. “There’s just something about being in Fayetteville now that I love. I love the environment. I really love being around all my teammates. I really can’t get homesick.

“My mom misses me, but she told me when I committed to where I wanted to go to college, that’s where I should be — going to class, working out. She knows what I’m here to do, so she lets me grind.”

Lincoln College Prep Coach William Lowe said that when he saw Hamilton-Jordan at graduation, it was easy to tell how much he already has changed his body since coming to Arkansas.

“When Jermaine came back a few weeks ago, the first thing we noticed was all the good weight he’s put on,” Lowe said. “Being able to eat at the training table as much as he wants and working out with Arkansas’ strength and conditioning staff, we knew that would really benefit him.

“That was the plan for him going down to Arkansas a semester early. That’s been a really big advantage for Jermaine going from high school football to high level college football with the increased strength and the physicality and the speed of the game.”

Enrolling early at Arkansas also helped accelerate Hamilton-Jordan’s transition from playing linebacker — his position at Lincoln College Prep — to nickelback for the Razorbacks.

As a senior last season, Hamilton-Jordan had 91 tackles, including 17 for lost yards, in eight games. He had 150 tackles in 12 games his junior season.

“He always played in the box for us as a linebacker, just because he was a dynamic high school player,” Lowe said. “We got him closer to the ball, and he could make so many plays for us.

“He played outside linebacker his freshman and sophomore years. People ran away from him, so then we put him inside and let him run to the football and have a bigger impact on the game.”

Lowe said the Lincoln College Prep coaches knew Hamilton-Jordan would play defensive back in college, so he got some work there in practice during individual drills last season. The high school’s defensive backs coach, Kareem High, played at Kansas.

“Getting Jermaine some work in practice at defensive back, that was just something we did to help him out so he’d feel more comfortable when he got to Arkansas,” Lowe said.

Hamilton-Jordan said he appreciated what the Lincoln College Prep coaches did for him, but the position switch still was a challenge in the spring.

“It helped because I wasn’t just at square one,” he said. “I had already learned some things, so I could continue to advance when I got up here.

“But spring practice was frustrating at first, because I struggled with my footwork. Coming from linebacker, I wasn’t used to backpedaling all day long. When my footwork came along, that’s when everything started making more sense.”

“I know I have to work my way up the depth chart, but the older guys helped bring me along, like Joe, Cat, Sims,” he said. “Sims called me every day, and he’d come get me and we’d go watch film.”

Hamilton-Jordan said he feels good about his knowledge of the playbook.

“With school, I’m very intelligent, so the playbook, that will always come,” he said. “That’s natural for me. I know those spots where I’m supposed to be. I have the film from spring that showed me things I’m not supposed to do.

“Now I can look at the film and fix some things. I know what the playbook says, and I’m getting comfortable with doing it on the field.”

Arkansas defensive coordinator Barry Odom had a lot to do with Hamilton-Jordan’s decision to sign with the Razorbacks over other offers that included Kentucky, Iowa State, Kansas State, Kansas, Washington State and Tulsa.

Before joining Coach Sam Pittman’s staff at Arkansas in 2020, Odom was the head coach at Missouri.

“As an eighth-grade kid, I watched Coach Odom at Mizzou,” Hamilton-Jordan said. “I went on visits to Mizzou my freshman, sophomore and junior years. I just wanted to be coached by Coach Odom.”

Hamilton-Jordan said his interest in Missouri waned after Odom was fired.

“My phone wasn’t working one day, and I was at the store getting it fixed,” Hamilton-Jordan said. “My high school coach had called my mom and he said Coach Odom had just called, and he’s at Arkansas, and he’d like to give you an offer.

Hamilton-Jordan hopes to help the Razorbacks turn around their program the way he helped Lincoln College Prep, which went from 3-7 his freshman season to 6-4, 11-1 and 7-3 his last three seasons.

“We just kept getting better and getting more kids into the program,” Lowe said. “Jermaine was the face of that.

“Now Lincoln Prep in Kansas City, it’s known for being a football school. Where, shoot, four years ago going into Jermaine’s freshman year, it probably would have been the opposite.

“Jermaine just has a knack for getting to the football. He plays at a different speed than everybody else. If you lined him up in a footrace, Jermaine probably wouldn’t win. But if you put people on the field and give somebody the ball, Jermaine will beat the other guys to him.”

“That was another reason I wanted to play here, because I know about helping build a winning program,” Hamilton-Jordan said. “I know you need that bonding. You’ve got to love your brother.

“If you love the person to the left of you and to the right of you, there’s really no stopping your team because you’ll put it all on the line for each other.”

Hamilton-Jordan said he likes the feeling of being around his new teammates.

“The team vibe is serious,” he said. “The guys told me coming in, ‘Those three wins last year might have looked good, but at the end of the day that’s not the standard for Coach Pittman.’

“As a team, we’re focused. We’re strong. We know what work we have to do. We’ve got to go through the hard work now so that in the fall, it will show.”

Lincoln College Prep’s 11 victories in 2019 have resulted in a documentary in the works on the season.

A film crew followed around some of the players last season, including Hamilton-Jordan. He said he expects the documentary to air in August.

“It’s like a ‘Last Chance U’ type of deal, but for high school,” said Hamilton-Jordan, referring to a Netflix series focused on junior-college football. “The story line will be about the challenges we faced coming from 3-7 our freshman year to turning it around with an 11-1 record our junior year.

“I think it will be pretty good, and I’m looking forward to seeing how it turns out. With things happening now in college with NIL [name, image and likeness], hopefully I can use this documentary as a platform.”