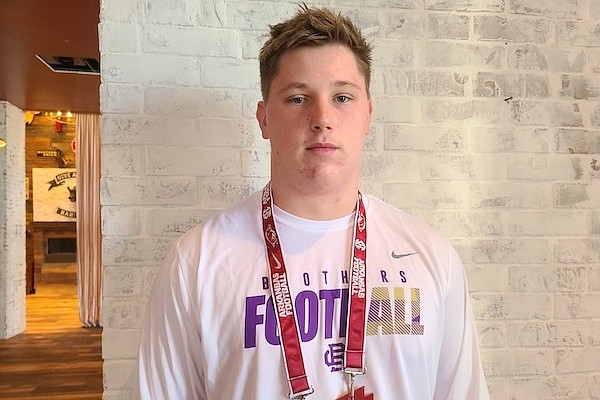 Kutas, 6-5, 280 pounds, of Christian Brothers in Memphis, also had offers from schools such as Louisville, Tennessee, Texas A&M, Mississippi State, Purdue, Virginia, Virginia Tech and others.

He made an official visit to Fayetteville on June 11-13 and felt at ease with Coach Sam Pittman and players.

“It felt right. It felt like it was the perfect time,” Kutas said. “I really like Arkansas. I think it’s a positive trend where they’re going. I really bonded with all of the coaching staff there – the strength coach, Coach Pittman and even the players. I just felt comfortable around them.”

He and his parents did a virtual visit with the Razorbacks on Feb. 27 and he followed that up with a trip to Fayetteville for a spring scrimmage on March 20. He also officially visited Illinois and Oregon in June.

“Coach Pittman produces hell of good O-linemen,” he said. “I think I could be the next great O-lineman there. I know my work ethic. I could get a shot at playing early. It’s SEC ball. You’re not getting better than that.”

Kutas’ trust in Pittman also factored into his decision.

“In talking to all the players there, they all trust him,” Kutas said. “They all have that sense of winning. There’s something around him that makes you want play for this guy.”

Kutas has said the Razorbacks were recruiting him to play defense but that has changed.

“I kind of talked to them about that because we’ve been having practice and I’m really kind of focused on the O-line this year,” Kutas said. “If I wanted to play D-line there they would definitely let me do that, but right now I think I’m more of an O-lineman.”