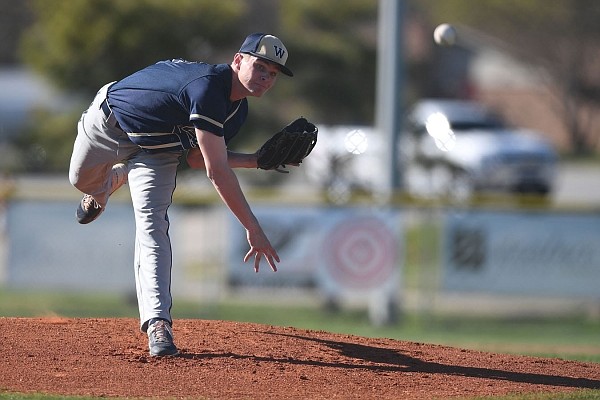 Former Bentonville West and Neosho (Mo.) Crowder College standout Dylan Carter thought being a catcher would be the route he took to play college baseball.

But a fortuitous position change and a fastball that amps up to 95 mph were the keys that led the right-handed Carter (6-2, 205) to Arkansas as a pitcher who is looking to take the mound for the Razorbacks in some role in 2022.

“I didn’t start pitching until I was a junior in high school and actually I was trying to go to college as a catcher,” Carter said. “When I started pitching, it was a lot different, but I put in a lot of hard work the season before covid to how hard I worked the following spring, summer and fall and it paid off this spring.

“Now I am going to Arkansas and it is a dream come true. I have been a Hog fan since the day I was born, and being on the roster is such a surreal feeling.”

Carter is already on the Arkansas campus.

"It is going to be a great year and we are going to contend for national championship.”

Carter was 8-1 this season for Crowder in 14 appearances (13 starts) with 77 strikeouts in 61 innings and two complete games.

“Landrey is a great, great player and I’m happy he is a Razorback as well,” Carter said.

Those two and many other former Northwest Arkansas prep standouts were part of a great season for Crowder, which finished 55-8 and lost in the semifinals of the NJCAA national tournament.

“It was a phenomenal season and you can’t really ask for much more than we had, except for a national championship, but the team we ended up losing to was on a roll and that proved their case and ended up winning it all,” Carter said.

Carter noted Crowder expected to be a national championship contender.

“Us getting that far was a testament to the hard work we put in,” Carter said. “It was a team (in 2020) that started off as team (No.) 55 and ended up being ranked second nationally and having our season cut short due to covid.

“I think we knew when we stepped back on campus in August of 2020 that we had one goal in mind and that was to get to the national championship and that we had all the pieces there.

‘We had a tremendous season and got hot when we needed to, proved our case and had a great run. Now it’s time to do the same with Arkansas, which has established itself as a national power and an elite program that I am really proud and honored to be a part of.”