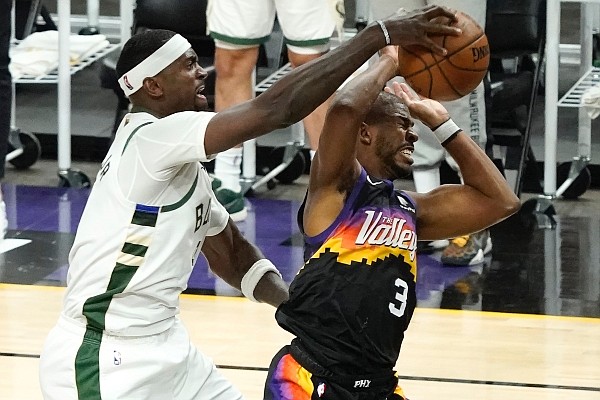 Former Arkansas forward Bobby Portis and the Milwaukee Bucks are one win away from an NBA title.

The Bucks, who fell behind 2-0 to begin the NBA Finals, have reeled off three consecutive wins after Saturday's thrilling 123-119 victory in Game 5 over the Phoenix Suns. And Portis, once again, made an impact in his time on the floor.

Milwaukee's energy big off the bench provided 9 points on 3 of 6 shooting, 3 rebounds – all on the offensive end – and 2 steals.

The Bucks outscored the Suns by seven points with Portis in the lineup.

"The energy that Bobby brings, man, nobody else can do that," said Milwaukee guard Jrue Holiday, who finished with 27 points and 13 assists.

Portis' first bucket of the game – a three-pointer from the right corner – came early in the second quarter as the Bucks rallied to erase what was a 16-point Suns lead. The hit pulled Milwaukee within 40-35.

He then added back-to-back scores to give the Bucks a 50-49 lead less than six minutes before halftime. After a three-point miss by Pat Connaughton, Portis corralled the ball, missed a short floater, followed his shot then got a layup to go through contact.

"When he's flexing on people, when he's getting offensive rebounds and he's yelling at the camera and all that, we love it," Holiday added. "The energy definitely picks up."

His final score was a left-corner three assisted by Giannis Antetokounmpo. Portis has knocked down 5 of 11 three-point attempts in the series.

Through five games, Portis is averaging 6 points on 36.7% shooting and 4.2 rebounds per game. Nine of his 16 rebounds over the last three games are offensive.

Game 6 is scheduled for Tuesday at 8 p.m. on ABC. A win would give Milwaukee its first championship since 1971.