A quick study: QB Coley discovering what it takes in SEC 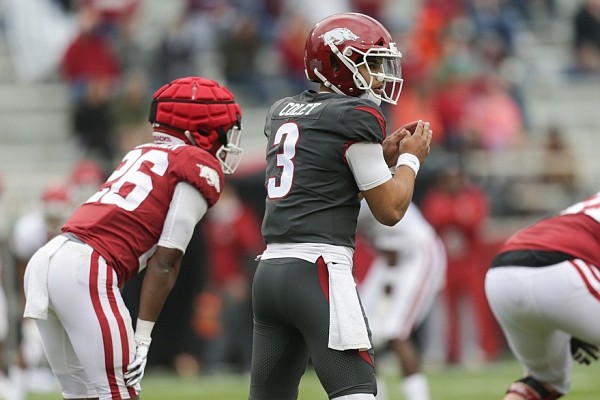 Arkansas quarterback Lucas Coley (3) prepares for the snap on Saturday, April 17, 2021 during the third quarter of the Red-White spring football game at Razorback Stadium in Fayetteville.

FAYETTEVILLE — Quarterbacks can’t be hit during practice at the University of Arkansas, so true freshman Lucas Coley didn’t have some rock-your-world collision that let him know he had entered the realm of SEC football during spring drills.

Coley’s welcome to the SEC moment came in a more cerebral format that signifies the challenges faced by quarterbacks running modern read-option schemes like that of Arkansas offensive coordinator and quarterbacks coach Kendal Briles.

“My welcome to the SEC moment was one day in meetings we’re going over plays and they were just not clicking for me,” Coley said late last month. “I’m a competitor so it pissed me off.”

Noteworthy Rated the No. 9 dual-threat QB in the nation, the No. 59 player in Texas and a 4-star prospect by ESPN. … Three-star prospect by 247Sports and Rivals. … Passed for 1,100 yards, 13 TDs and 1 INT in 10 games as a senior, and rushed for nearly 500 yards and 11 TDs. … Amassed 3,000-plus yards of total offense and 30 TDs as a junior. … Chose Arkansas over Central Florida, Tennessee, Virginia Tech, Houston, Louisville, Vanderbilt, Yale and others.

Instead of backing away to clear his head and attacking it fresh the next day, Coley kept his nose to the grindstone.

Coley, an early enrollee from San Antonio’s Cornerstone Christian School, has a welcome ear in his mother and greatest supporter, Deborah, and he leaned on her that long night a few months back.

“After leaving the facilities about 10 p.m. that night, I called my mom and kind of vented to her,” Coley said. “That was my welcome to the SEC moment. It’s a different breed. It takes a level of work day in and day out.”

Coley wants to compete for the starting quarterback job right now for the Razorbacks, and to do that he’ll have to show a strong grasp of the system to challenge redshirt sophomore KJ Jefferson and redshirt freshman Malik Hornsby. Jefferson ran with the starters throughout the spring, and Hornsby got most of the work with the second unit.

The 6-2, 217-pound Coley followed a growing trend as one of 10 Razorback signees who enrolled in January to go through spring drills. He called the decision amazing.

“Early enrollment was like the best thing I decided to do as far as learning from the vets, KJ,” he said. “Coming in here and learning a whole new system and getting it down pat in six months, it’s been very fun, yet very challenging.

“I just learned how to work again. It’s a different level in college, especially in the SEC. Everybody’s bigger, faster, stronger. Just catching up, gaining a few pounds and just working and being consistent.”

“We compete every day during workouts,” he said. “We’re always running alongside each other, working and lifting next to each other. In the meeting rooms, doing actual work and stuff. KJ has been a good role model as far as on the football field and even off the field since I’ve been here.”

“Most people don’t know this, the things he would do off the field,” Bachman said. “He worked as a side job with our custodial staff. Most kids run from things like that.

“With our school naturally being a ministry, there’s hundreds of things going on every weekend. Lucas would take that as an opportunity to make some money, but that’s not just why he was out here. You could catch him out on the football field with the youth and continuing that leadership phase of his life.

“I know that’s coach speak, but that’s really him. He’s a great football player and an even greater person. I can’t say enough good things about him.”

Coley is especially close to his special-needs nephew, JJ, who would come down to the sidelines during games and celebrate on the field after them.

“Not being able to see, take care and help him every day, I feel like that was the biggest challenge,” Coley said of being away from home since January. “Then, like going to my mom, she’s always been like right beside me. I could just go home and vent to her about practice and stuff like that, so those two things were definitely the biggest changes.”

Bachman said one of his best stories involving Coley was how he bounced back from a mistake.

“Our first game his senior year … we take on opponents and punch above our weight class a little bit, and we’re at [Corpus Christi] Calallen,” Bachman said. “We’ve got the ball and we’re trying to run out the clock. He makes a mistake. He throws the football and it’s an incomplete pass. He does the one thing you can’t do in that situation: He kills the clock.

“Naturally he sees me on the sideline, and I’m frustrated and I’m looking at him. He just looks at me and says, ‘Chill Coach, I got you.’ And I laughed and I didn’t know what to say. It got me back in the moment and all I told him was, ‘You better.’ And he did.”

The Warriors picked up a first down and ran the clock out in a 24-20 road win.

“That’s just who he is,” Bachman said. “It’s a huge moment in the game and he knows how big it is, knows he made a mistake and he immediately went about fixing it the next play and told me to calm down in the process.”

Coley said his head was spinning for just a while during his first college spring.

“I feel like I’m a quick learner, and I just came in with an open mind and tried to flush away all the past knowledge of the systems I’d been in and I feel like my head, maybe it was spinning to a certain extent,” he said. “I feel like I was thinking a little too much on the field instead of playing with instinct. But that comes with time and confidence with the offense and everyone around me.

“We’ve got guys up here that can make plays at every position, so just kind of being dependent on them instead of being very independent as I was in high school has been a very big learning experience.”

Briles, a Texas native himself, was Coley’s lead recruiter.

“Coach Briles is a hard-nosed coach,” Coley said. “He’s going to try and drill the information in your brain as much as possible, but … if you don’t learn it you just won’t play, so that’s what I like about him. It kind of forces you to spend all those hours of free time and kind of dedicate it toward being a quarterback.”

“You don’t want to play down to the workout, just because it wasn’t hard. You never want to slouch. If there’s one word to describe me it would be relentless.”

Coley said he’d like to report to camp about 220 pounds, a few pounds more than his current weight, and have a productive summer.

“Really just stay consistent in the playbook, stay consistent with my teammates off the field,” he said. “Just kind of building that chemistry that it takes to be a successful SEC quarterback. Those are two of the main things.”