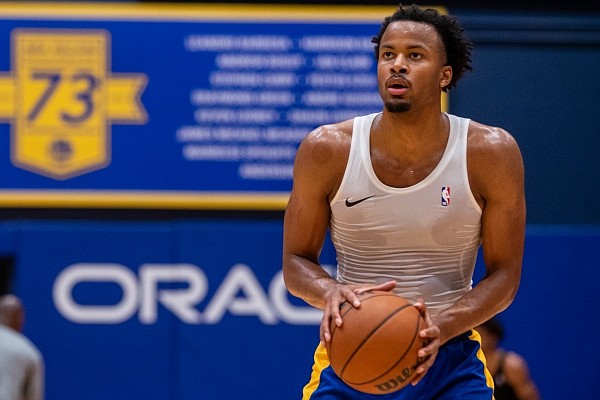 In addition to training with other Klutch Sports Group-managed draft prospects, Moody has visited a few franchises for pre-draft interviews and workouts, including Indiana, Golden State and Sacramento. The Pacers own the No. 13 selection in the first round, the Warriors hold the No. 7 and No. 14 picks, and the Kings have the No. 9 slot.

Moody has had a number of eye-opening experiences since his college career came to a close.

“It’s been crazy,” Moody said. “Just a kid from Little Rock hanging out with Rich Paul and LeBron (James), it’s different. I’m in a lot of rooms that I’ve never been in before.

“I’m just taking this time really just as a transition period to where I’m introduced to a new world.”

One of those moments came earlier this month on the night Dustin Poirier and Conor McGregor headlined UFC 264 in Las Vegas. While taking in the fight from agent Rich Paul’s home, Warriors forward Draymond Green dropped in.

Green, a three-time NBA champion and All-Star who is on the Team USA roster for the approaching Tokyo Olympics, provided bits of information and advice to Moody about life at the next level and handling his business.

“That's the best part about being with Klutch,” said Moody, who has drawn comparisons to Milwaukee Bucks guard Khris Middleton. “You can just be hanging out in the most random places, like hanging out with your agent, and then anybody could walk through that door. I was just chopping it up with him.

“One of the biggest things he was saying was keep the main thing the main thing, which is basketball. Getting into the league, there can be a lot of different distractions. There are a lot of ways you could go. But when it comes down to it, you're a basketball player, so do that.”

Moody visited Golden State last week, first attending a dinner on Wednesday by walking through the back door and into a private room that, jokingly, he said made him once again feel big-time. His workout came the following day.

During the interview process, Moody noted he went over game film and broke down plays and various situations that occurred last season. He gained a good understanding and feel for those in the front office.

Given his maturity and having played at Arkansas for a staff with a wealth of professional experience, Moody has felt more than prepared for the pre-draft process on and off the floor.

“He uses a lot of NBA terminology,” he said of Razorbacks coach Eric Musselman. “He's obviously an NBA guy. It's like I got introduced to the game a year early. A lot of the terminology, a lot of the positioning, floor spacing, those are things I've been working on for a while now.

“I definitely feel like I had a head start.”

There are questions about the upside of Moody, viewed by some as a nearly finished product coming out of college. But he is OK with the fact that there are doubters, because he is willing to go to great lengths to ensure success and longevity.

“Honestly, everybody is going to have their opinion,” Moody said. “I feel like I’m going to put the work in and do what I have to do. I’m going to do it no matter what anybody thinks.

“I just have faith in myself and believe that I’m going to put that work in to be the best player I can possibly be.”

Kai Jones, a 6-11 forward from Texas who has trained with Moody throughout the summer, is a believer in the guard and his style of play. Moody is a tactical player in his eyes.

“He takes his time on the court, plays in slow motion and is somebody I’ve learned a lot about pace from,” Jones added. “The impact he’s had on me is he’s just a positive person to be around when we’re working out.

“As a player, I think he’s got really high upside. I think he can be a really good scorer in this league.”

Listed at 205 pounds on Arkansas’ roster last season, Moody has added roughly 15 pounds since his move to Los Angeles. And on the floor, he said he has adjusted well to the NBA three-point line and 100% leather basketball, which he actually likes more than the composite balls used in the college game.

Between now and the draft, Moody, an eager learner, plans to continue picking up on skills and tools used by older players he comes in contact with. Once draft night arrives, he isn’t sure how he will react when his name called and he is fully immersed into that new world.

“I’d imagine it’ll be a lot of different emotions coming toward me,” he said. “But I’m just going to live in the moment, and when I’ll get there, we’ll see.”