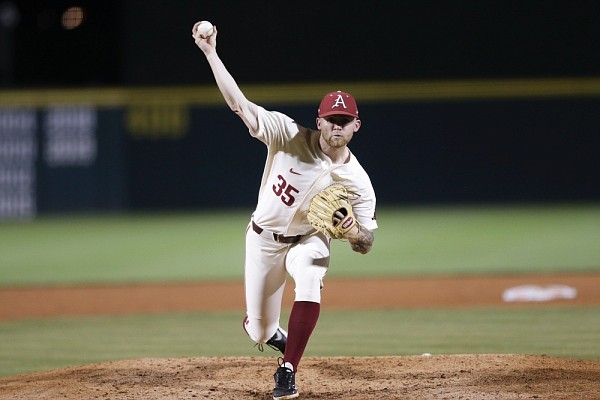 Arkansas Ryan Costeiu (35) pitches, Sunday, June 6, 2021 during the sixth inning in the NCAA Fayetteville Regional at Baum-Walker Stadium in Fayetteville.

He pitched 30 innings and had a 5.30 ERA in his only season at Arkansas. A native of Clayton, Calif., Costeiu transferred to the Razorbacks after two seasons at Sacramento City College.

In 26 relief appearances, Costeiu had an 8-3 record, struck out 40 and walked 15. He allowed three home runs over the course of four at bats in his final outing on June 12, a 6-5 loss to North Carolina State that forced a winner-take-all game in the NCAA Fayetteville Super Regional.

Welch, a 19th-round pick of the Seattle Mariners, signed for $125,000. In 2021, he served as a pinch hit specialist after transferring from junior college.

"Arkansas, it is hard to truly express in words how grateful and blessed I am to have played for this state," he wrote Monday in a post to his Instagram account. "Thank you to my brothers, who were always there to pick me up and push me to be better.

"...Thank you Arkansas for making this past year the best year of baseball in my life. With that being said, I am blessed and honored to say I will be continuing my career professionally with the Seattle Mariners."

Welch had a team-high .388 batting average and 1.315 OPS, and had two of Arkansas' most memorable hits — a game-winning single to beat Florida on May 21 that clinched the SEC regular-season championship, and a three-run home run during the eighth inning of a 6-2 win over Nebraska in an NCAA regional championship game.