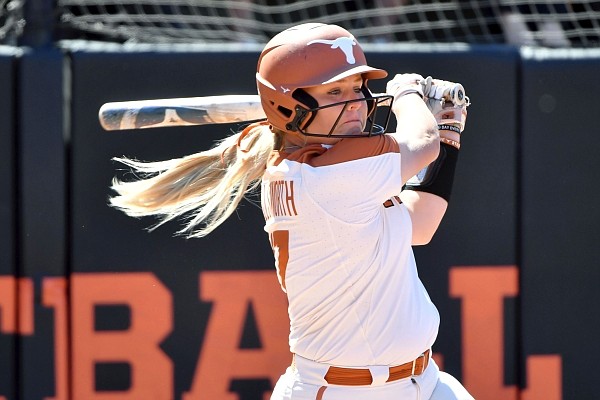 The University of Arkansas softball team continues to reload through the transfer portal.

Taylor Ellsworth, a catcher/utility player who hit .372 and made 44 starts last season for Texas last season, was added to the Razorbacks roster as a graduate transfer, Coach Courtney Deifel announced Wednesday.

Deifel said Ellsworth obviously fills an immediate need with the departure of starter Kayla Green behind the plate.

“(Kayla) had the year and she’s choosing not use it,”Deifel said. “So it’s a pretty great fit to get a catcher of Taylor’s calibre to come in for a year. It’s a perfect chip for us.

“She’s had a tremendous career at Texas and we think she will pick up right where she left off and be a huge impact player for us.”

Ellsworth becomes the fourth transfer for the Razorbacks this offseason. She also hit seven home runs, added nine doubles, a career-best 31 RBIs and will have one year of eligibility remaining.

Deifel said she expected to utilize the portal this season after a few players such as Green chose not to utilize the extra year the NCAA offered because of the pandemic.

“I have mixed feelings on the portal but that’s where are game is,” Deifel said. “And we knew how covid kind of affected everything and our first priority is taking care of our current roster, it put us in a position where we were going to need some transfers. Some short-term ones more than anything just because of the departures that we had.

“We went into the off-season thinking we were going to hit it and we feel like we’ve added some really, really big additions to our team.”

She saw action behind the plate, in the outfield and as a designated player last season. But Deifel said her primary position will be behind the plate. Ellsworth totaled 144 hits, 25 doubles, 16 home runs and 89 RBIs in her career with the Longhorns with a .320 batting average in 171 games.

The Georgetown, Texas product earned All-Central Region honors for the second time in her career as selected by the National Fastpitch Coaches Association this season. Ellsworth put up impressive career offensive numbers in high school, batting .550 with 21 HRs and 107 RBIs despite choosing to skip her senior season and enroll early at Texas.

Ellsworth joins pitchers Chenise Delce (Tulsa) and Callie Turner (Tennessee) and outfielder Kendall Beth Sides (Alabama) who all transferred to Arkansas. Sides is another graduate transfer, who will hae one season of eligibility. Delce has two seasons of eligibility left, while Turner has three.

Ellsworth redshirted her junior season, suffering an injury after playing just three games. She burst on the scene as a freshman led the team and ranked fifth in the Big 12 hitting .394 (52-for-132), and was named All-Big 12 first team, Big 12 All-Freshman Team and All-Region first team. She also led the Longhorns collecting 52 hits, 24 RBIs, 67 total bases, a .508 slugging percentage and .419 on-base percentage in 44 games.

This comes on the heels of the Razorbacks’ best season in school history. They claimed their first Southeastern Conference regular-season title and hosted their second NCAA Regional and second Super Regional.

Deifel expects all four to made big impacts immediately.

“That’s why you get them,” Deifel said. “At this point, we’re not trying to add depth. We’re trying to add impact and we see that in all of them. I really do feel with what we have coming back and we we’ve added, I believe we had a top five pitching staff in the country and then you’re able to add bats and players like K.B. and Taylor.

“I felt like our team was in a really good spot. I feel like we’ve elevated that.”