Hogs have the respect of Kirby Smart 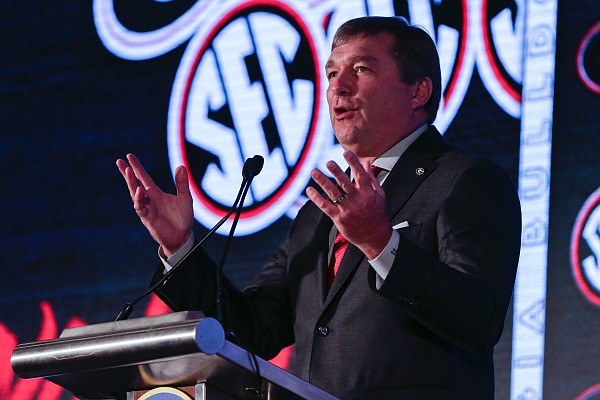 HOOVER, Ala. — Georgia Coach Kirby Smart came away from last year’s season opener at the University of Arkansas impressed with the Razorbacks and Coach Sam Pittman, his former offensive line coach, who was making his major college head coaching debut.

Georgia, trailing 7-5 at halftime, pulled away with a late third-quarter flurry and won 37-10, but Smart noted the Hogs’ toughness and coordinators Barry Odom, the former Missouri head coach, and Kendal Briles.

“I’ve got a lot of respect for Sam as a person, a coach and a man,” Smart said Tuesday at SEC Media Days. “They did a tremendous job against us last year. They’ve got an unbelievable staff.

The Razorbacks travel to face Smart’s Georgia club on Oct. 2.

“I think they’ve got a lot of players coming back,” Smart said. “Somebody told me they have more seniors than anybody in the conference, which, if you’ve got a lot of seniors, look at the track record. Those are the teams that are most successful.”

Alabama Coach Nick Saban made news on Tuesday, and he’s not scheduled to show up in Hoover until this morning.

“Our QB has already approached ungodly numbers and he hasn’t even played yet,” Saban said. “If I told you what it is … it’s almost seven figures.”

Young has signed with CAA, one of the strongest agencies in professional sports, to handle his marketing deals as players began to benefit from name, image and likeness deals starting July 1.

“You just blew me away,” Ole Miss Coach Lane Kiffin said when informed of Saban’s remarks. “That’s amazing. He made a million dollars and hasn’t started a game yet? Wow, I don’t even know what to respond to that, but great for him.”

Kiffin said it’s neat players can capitalize on their skills and marketability.

“I think it’s very challenging trying to figure out how these things happen and what’s legal and what’s not in all that,” he said. “I was asked earlier about it. I said I’m excited for it. I wouldn’t want to be compliance departments. But a million dollars, whew.”

Kiffin came back to the topic later.

“He’s getting $1 million already?” Kiffin said. “He don’t need to play next year against us then.

Paschal made the appearance to promote cancer awareness as a melanoma survivor.

He said his mother turned into a fan girl on Lopez, who was going in and out of the guest lounge off the “Today Show” set.

“She’s walking up the stairs, and I just look up,” Pascale said. “I was looking at the stairs, and I look up, and we make complete eye contact. And she winked at me. I hope that wink was real because I’ve been telling this story ever since it happened. When I tell you I melted, I melted.”

Georgia Coach Kirby Smart said he had a humbling experience at a restaurant in Augusta, Ga., with his children earlier this month. The family was in town for his son’s baseball tournament.

Smart said several people came over to get his autograph and that he “held a baby, took a picture, did several autographs.

“And I had an elderly lady come over to our table and say, ‘You must be somebody famous.’ I said, ‘No, ma’am, I certainly don’t think so.’”

The woman asked if Smart was a professional golfer or a NASCAR driver, to which Smart replied he wasn’t.

“By now, my kids are kind of giggling, and the last one she said, ‘Are you a track star?’ And my daughter almost spit out her food and just thought it was hilarious.

“At this point, I said, ‘No, ma’am, I coach football at the University of Georgia.’ I always say humility is a week away.”

Daniels was asked what he thought of Young, presumably taking over as the starter for the Crimson Tide.

The betting website BetOnline installed Daniels as its Heisman Trophy favorite with 5-to-1 odds on Tuesday. The other former SoCal school boys were in the top eight, with Young and Stroud tied for third at 10-1 (behind Oklahoma’s Spencer Rattler at 7-1), followed by Uiagalelei at 11-1 and Corral tied for seventh with USC’s Kedon Slovis at 16-1.

Kentucky Coach Mark Stoops did not exactly answer the question when asked if he was interested in adding a ninth league game. Previously in Hoover, Florida Coach Dan Mullen and Georgia Coach Kirby Smart have advocated for a nine-game SEC schedule and Alabama’s Nick Saban has supported it for years.

“I wondered if people watched last year,” Stoops said, in reference to the SEC’s 10-game all-conference schedule. “The league, there was quite a few people that struggled, if anybody took notice of that. So that’s how I feel.”

Nine SEC teams finished .500 or worse and only five teams had winning records, including Auburn at 6-5.

Later, Stoops addressed the 10-game schedule again, saying, “Take a long, hard look at what it did to half our league.

“It could have been easy for our team to fold the tent, and they didn’t do that. So I have great respect for them and the coaches in our program.”

Ole Miss Coach Lane Kiffin extolled the work of Alabama Coach Nick Saban, his former boss, on three separate occasions as the final coach at the podium on Tuesday.

“To do what he’s doing nowadays and every year, you guys say something that upsets him and gives him rat poison and makes him mad, and then we have to deal with that,” Kiffin said, drawing laughs. “So I don’t know what the story line is this year. It will be something that you did about losing too many staff guys or the quarterback or whatever, but he just finds a way, and it starts with recruiting.”

Later, Kiffin was asked about tweeting at Saban.

“I think it’s all in fun,” he said. “I think you guys know, are around enough covering us, how much respect I have for him, how grateful I am for him hiring me and the three years together with him and what that did for my career.

“But the respect — like I said, nobody’s done it like he’s doing it ever. With the scholarships, just should be an asterisk to what was done before, no disrespect to other coaches.”

From USC to SEC

Now they’re both in the SEC and were at media days on Tuesday.

Daniels, who graduated from high school a year early, said he spent the spring before his freshman season visiting practice.

“I would come up to USC and spend the weekend or spend almost the whole week there to watch spring practice and try and learn, and I stayed with Velus,” said Daniels, who is from Irvine, Calif. “So Velus and I have been really good friends since I was 17. He’s just a really good guy.”

Jones said he and Daniels spent a lot of time together.

“Me and JT, we hung out a lot, played video games together,” Jones said. “He was always at my apartment. Couldn’t get him out. I tried to kick him out a lot.”

Former Florida and South Carolina Coach Steve Spurrier has given his name and support to an award sponsored by the Football Writers Association of America.

The Steve Spurrier Award will be given annually to the best first-year coach in college football. The award has been given since Notre Dame’s Ty Willingham won it in 2002, but it did not have a namesake until now.

Spurrier, who has a record 23 appearances at SEC Media Days, is the last SEC East coach to defeat Alabama, with a 35-21 win over the Crimson Tide on Oct. 9, 2010. Since then, Nick Saban’s Tide is 30-0 against SEC East opponents, including 6-0 in the SEC Championship Game with three wins over Florida, two wins over Georgia and one win against Missouri, and a 26-23 overtime victory against Georgia in the 2017 national championship game.

Fans watching the feed from the main media room at SEC Media Days might notice loud background noises from time to time.

Those laughs and loud talking are coming from the SEC Network set, which is positioned in the back of the ballroom housing the main media.

Although screen partitions are available between the rooms, they are not rolled into place to separate the two spaces.

When long-time Arkansas Democrat-Gazette writer Bob Holt asked Kentucky Coach Mark Stoops about the coaching turnover in the SEC and his status as the second-longest tenured coach in the league, Stoops went to a personal level.

Stoops said it was great to see Holt in person again and that he always watches him asking questions of each coach at media days and “getting that air time.”

Replied Holt, with a laugh, “I’m trying to grow my brand.”

• ESPN announced on Tuesday that it had reached agreement on multi-year extensions with Joey Galloway, Dari Nowkhah, Peter Burns and Alyssa Lang. Galloway, a former Ohio State and NFL receiver, is a 10-year ESPN veteran. Burns and Nowkhah have been anchoring “SEC Now” on the SEC Network since its launch in August 2014, and Lang joined the show’s desk in fall 2018.