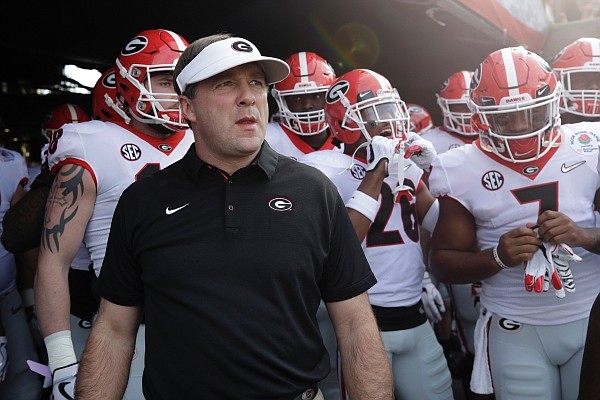 HOOVER, Ala. — Kirby Smart didn’t look like a football coach.

It was the immaculate perception.

With a tailored suit and perfect tie, Georgia’s football coach looks like he could be a big-time Houston minister.

His boyish good looks combined with dressing for success and a disarming smile are deceiving.

The 45-year-old head coach will do just about anything to win.

He’s driven to get to the top.

As a four-year letterman as a defensive back at Georgia, making All-SEC his senior year, saying he was so competitive that he was a leader by example more than verbally is an understatement.

Like thousands of others who wanted to stay in the game, he bounced around five years getting experience, making contacts and trying to become part of someone’s coaching tree.

He became the defensive backs coach at LSU for Nick Saban, who had established himself as a tireless recruiter who wanted to win every game.

The next season Saban, who promised he had planted an oak tree in Baton Rouge and wanted to watch it grow, left for the Miami Dolphins and Smart landed at Georgia.

A year later, they were together again in the NFL, and when Saban, who swore he was not leaving the Dolphins, took the Alabama job Smart went with his mentor.

From 2007 to 2015, Smart became the assistant head coach and defensive coordinator at Alabama. Only Bobby Williams has worked for Saban longer than Smart who spent a total of 11 years with the mastermind of the Tide.

Smart didn’t have to stay that long. He turned down jobs waiting on the right one, which was always going to be Georgia.

By all accounts they are close, until football starts and then the competitive juices flow at high tide.

Saban slams the door on his facility and doesn’t endure anything that doesn’t have to do with winning football games. He tolerates a weekly press conference, but players and assistants are off limits.

While the fans are starved for more information about the Crimson Tide, Saban is the GOAT and the fans like winning championships more than anything.

Smart circles the wagons, and while his fan base would also like to win more championships, they relish the 52-14 overall record and 32-9 SEC record.

Both come across as paranoid: Smart more during the season, Saban more consistently.

The big difference is Smart, like 22 other Saban assistants, hasn’t found a way to beat the guy who uses the media to get messages to his fans and players.

In three meetings, Georgia has been respectable.

The last time they faced off was during the pandemic year and Georgia lost 41-24.

The other two meetings were in the SEC Championship Game in 2018 when the Tide won 35-28 and the previous season in the 2017 national championship game won by Alabama 26-23 in overtime.

Georgia hasn’t been back to championship game since, and that combined with the 0-3 record against Saban has some fickle fans grousing a bit.

It doesn’t help Smart that he is so guarded, so different during the season.

Georgia fans like for their coaches to be fan-friendly.

Someone polled on the internet if Kirby Smart was on the hot seat if he didn’t win the SEC this season.

The results didn’t matter, the bottom line is no.

He may not be as popular as his predecessor Mark Richt, but he’s winning at a rich clip, and he hasn’t been embarrassed by his his former boss.

And once a year, at SEC Media Day, he looks and sounds like a choir boy.