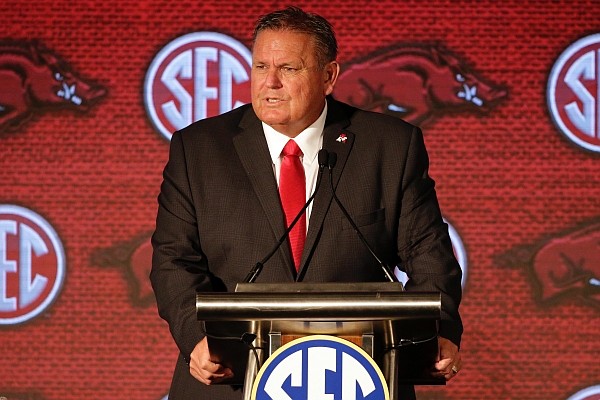 Arkansas football coach Sam Pittman spoke to reporters from the main podium at SEC Media Days on Thursday. Here is a rundown of what he said:

• I brought Myron Cunningham and Grant Morgan with me today. If it was up to me, I’d have brought the whole damn team. We have a team that works extremely hard, and they’ve bought in to what we’re selling. I’m appreciative of all of them, and our coaching staff.

• Morgan is a great young man and I'm excited for him. Myron turned down a lot of money and decided to come back to Arkansas. They're two of our super seniors.

• I've learned a lot of things as a head coach and I continue to learn. One is when your bowl game is over, people start coming after your coaches if they're good. We kept our three coordinators and our strength coach. We kept Barry Odom, who has been very valuable to me. I bounce things off of him frequently. He and I, believe it or not, walk quite a bit. We discuss the team, and it's a great 45 minutes so I can learn a little more about being a head coach.

I like Kendal Briles' swagger, confidence and his offense. He's a great teacher of the offense and I'm happy we were able to keep him. Scott Fountain, who is my neighbor, he elected to come with us from Georgia. He's loyal, a good recruiter and a hard worker. Our special teams will get better. He did an outstanding job.

Jamil Walker, our strength coach, has done a great job. The weight room is for confidence. I felt like we needed that.

• On the schedule: We are the defending national champs of having the toughest schedule. However, we're Arkansas, and we're excited about those challenges. Rice is very physical and very well coached. We have high respect for Texas, too. For the older folks in Arkansas, they're revved up about that game.

Georgia is our crossover game. I am indebted to Kirby Smart and wouldn't be the head coach at Arkansas without him.

• I'm proud of our state, university and our players. Arkansas is a proud damn state filled with honest, loyal people. We have the best city in the conference again.

• On offense, we return pretty much our whole offensive line, tight ends and most of our receivers. On defense, we have 10 returning starters. The only one not back was drafted by the New York Jets. We added some players on the defensive line.

• We'll be better this year. I don't know what that means in wins and losses, but I'm excited to get into our home stadium and hear our fans call the Hogs.

• On his seniors, and what it takes to make a jump: The belief in the program, you can't beat anybody if you don't think you can beat somebody. I think we're building on what we have done and getting better, and getting a few additions. We have enough players to have a good team as long as we execute.

• On the battles on the offensive line: I think there's going to be battles up until the first game at the guard spots. That competition will make you better. We have to find out who No. 2 is at running back. KJ Jefferson is our quarterback. Does he have competition? You're dang right, but he has played well in a game in the SEC before. In the secondary, you have battles at safety, and there's battles everywhere on the defensive line. At linebacker, we'll play three guys a lot – Morgan, Bumper Pool and Hayden Henry.

• Importance of the offseason with the tough schedule: You've got to take it one week at a time. We have eight games in a row, then a bye then we have the final four games. To be successful, we have to stay healthy. Depth is improved, but we have to be healthy.

• On Barry Odom in Year 1: He brought a lot of confidence. What comes out of his mouth, that's what he's going to do and is what he's planning on doing. We weren't very multiple last year, and that's because we didn't have a lot of linemen. Barry is an old 4-3 guy along with an odd and under front. We didn't do much of that. We didn't get anybody in 2nd-and-long. We're emphasizing getting people in 2nd-and-long. We didn't take many chances on first down. The kids believe in Barry, and so do I.

• On Treylon Burks: What he needed to do to become an unreal player is get in better shape. Hunting hogs won't do it. He's lost some weight, he looks good and is confident. He's a tremendous person. He's a South Arkansas kid.

• On the transfer portal: It's a shame there's kids in there that don't have a scholarship. Once you go in the portal from Arkansas, you're sure not coming back. We'll probably hold 2-3 scholarships per year for the portal.

• On defensive backs and playing with six at times: It was what we had when we walked in, and that's where our better players were.

• Personality of this team: Well, I hope they're confident and talk with their pads. You have to go take it. The only way you have a chance to win is to play hard, and you have to be unafraid and knowledgeable. I'm at Arkansas, the best school in the country, and that's what I believe. If they believe it, we'll be OK.

• On changes over the last year and a half: It's difficult. I'm a big guy and I am who I am. But you have to stay relevant. I have an Instagram, but I don't get on it. I don't tweet much, but I'm pretty good at reading. Our assistant coaches, the young guys, teach me some of that stuff. To stay relevant, it's trying to figure out from the kids what is important. If it is important to them, it's damn sure important to me.

• On the Arkansas-Missouri game: I think it's a very good rivalry. We haven't been on the winning side in a while. Our last win was my last year at Arkansas as the O-line coach. It might be a little bit more of a rivalry for the ones getting their butts kicked. Eli Drinkwitz and I are good friends, but we're very competitive as well. We see Missouri as our No. 1 rival.

• More on the secondary and the competition there: Greg Brooks and Myles Slusher are guys to watch. Malik Chavis is in a battle with Joe Foucha. Simeon Blair has a battle going on. Hudson Clark and LaDarrius Bishop are in a battle. The most talented position we have 1-2 deep is the secondary. A lot of battles right there between those guys.

• What you don't realize is that if you're an O-line coach, you talk to 20 people every day. You're coordinating a team of about half the offense. You're very knowledgable as an O-line coach. I don't want to be a torch bearer, but I would like to see more O-line coaches get jobs. I had to be qualified for this job, but I had a great passion for Arkansas. I want to do a good job for Arkansas, this state and this university.

On the set of SEC Now

• When you become a head coach or assistant coach, it takes a full year to do everything. This was the only thing I haven’t done as a head coach. I was a little nervous about the unknown.

• I don’t want to promise anything. We’re a team in progress and a hard working, physical team. I want people in the stands to say we play hard. You’re not going to get your team to play hard if they don’t believe in your or believe in something. We got the belief in our team last year. Being ahead at halftime of the Georgia game, it empowered us as coaches.

• If we don't believe we're the best in the country, we don't deserve to be. My first year as an assistant at Arkansas, Alabama beat us by a lot. The next year, they beat us by one point. Our team believed it could beat Alabama. We're worried about which one of these guys (on our schedule) we're going to upset and where it's coming from.

• On Treylon Burks: You know how you get really good players and they don't really know how good they are? He's finally turning the corner. He's not cocky. He was very passive. Now, you know how they get when they're a junior when they understand they can maybe set themselves up down the road? He's in great shape and is saying very little, leading by his actions. I guess he gets special-order gloves. He wears a 5XL glove.

• On the defense: I think as long as we can get in a four-man front and we're comfortable there, I think we can be a much better defense this year. I don't think we can play six DBs and play everybody in our league. If we can do that, with Barry's coaching and (defensive line coach) Jermial Ashley and (linebackers coach) Michael Scherer, we'll get there.

• We want to play teams whenever they're at their best. Last year I thought the only way to get better was to play. Covid was going to have to be incredible in our program for us not to play. Just playing helped us. For guys to be looking our for Arkansas, that means we've given them a reason. We've got 19 starters coming back. People are looking out for us, we've given them a reason for that and we'll be prepared for the challenge.