Rodgers, teammates expect Jefferson to 'check all the boxes' 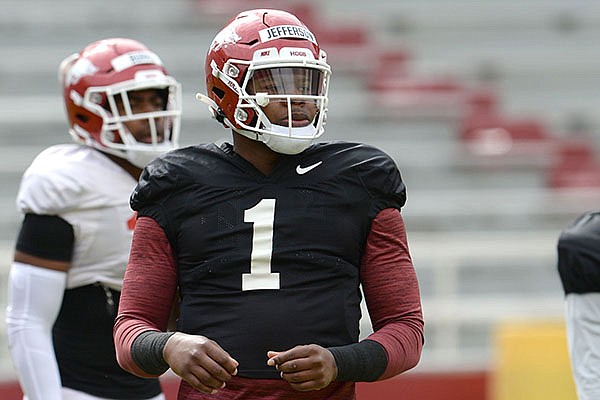 Arkansas quarterback KJ Jefferson is shown during a scrimmage Saturday, April 3, 2021, in Fayetteville.

A pair of teammates and an SEC Network analyst believe Arkansas quarterback KJ Jefferson has what it takes to help lead the Razorbacks to a successful season in 2021.

Jefferson, a redshirt sophomore who has largely served as a backup in his first two seasons at Arkansas, is expected to take the reins of the Razorbacks’ offense and will enter preseason practices as the team’s starter. He has only two starts under his belt, but Jordan Rodgers sees a player who has grown more comfortable in his own skin.

“Trust me, as a quarterback, when you struggle with the completion percentage, as KJ did at times last year, a lot of that is just comfortability,” said Rodgers, who played quarterback at Vanderbilt. “Being comfortable in the offense, going through your reads, knowing where your answers are, and being able to lead guys, I think he’s going to be able to check all the boxes.

“And (Arkansas has) all the pieces around him. It’s scary when a Sam Pittman offense returns all of their offensive linemen, and their running back and one of the best receivers in the SEC.”

Speaking to reporters from the main podium at SEC Media Days on Thursday, Pittman reiterated that Jefferson is his quarterback entering fall camp. But there is competition at the position with redshirt freshman Malik Hornsby and freshman Lucas Coley looking to make moves.

Jefferson, though, has SEC experience, giving him a leg up. He started on the road at No. 1 LSU in 2019 and at Missouri last season in a game in which he threw for 274 yards and three scores, and rushed for 32 yards and a touchdown.

“He has proven that he can play well in the Southeastern Conference in a game,” Pittman said. “He started one game, but he played well during that game.”

Linebacker Grant Morgan, who along with offensive lineman Myron Cunningham joined Pittman in Hoover, Ala., said Jefferson is a more mature player, and he is confident in Jefferson’s ability to lead the offense.

“He’s acting like a junior or a senior out there with the pads on and running around throwing the football and demanding people,” Morgan said on Thursday. “Having guys like Treylon Burks and Trey Knox around him, too, really does help that out.

“KJ has stepped up. To sum it up in a few (words), he’s stepped up and he’s being the leader that he needs to be.”

Cunningham, who Pittman said turned down hundreds of thousands of dollars to return to Arkansas this season, said that Jefferson brings a great deal of swagger to the field. He is becoming more vocal and is “very assertive in how he plays.”

“He's very athletic,” Cunningham said. “He's just got a great leadership factor, and I think it's only going to help him.”