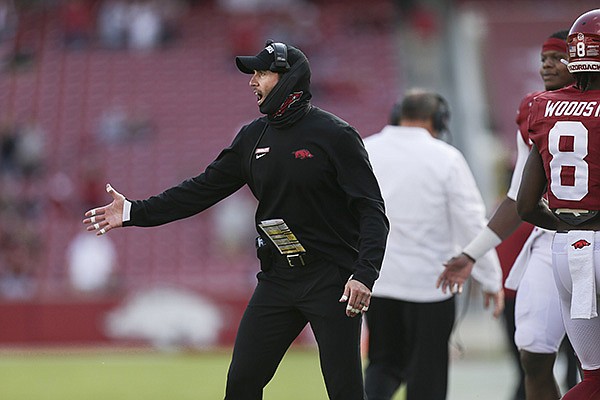 Arkansas offensive coordinator Kendal Briles is shown during a game against Ole Miss on Saturday, Oct. 17, 2020, in Fayetteville.

HOOVER, Ala. — University of Arkansas Coach Sam Pittman was one of very few coaches who gave shoutouts to his coordinators at SEC Media Days last week.

Pittman spoke about the importance of retaining all three coordinators: Barry Odom on defense, Kendal Briles on offense and Scott Fountain on special teams. He also praised the work of Jamil Walker and Ed Ellis with the strength and conditioning staff.

“We were able to keep Barry Odom, who has been very valuable to me,” Pittman said. “Obviously he was the head coach at Missouri in this league. I bounce things off of him frequently.”

Pittman went on to reiterate the value of their daily 45-minute walks and how they serve the dual purpose of burning off calories and giving the pair one-on-one time where he learns more about being a head coach.

Fountain was Pittman’s neighbor in Athens, Ga., on Kirby Smart’s staff at Georgia, and they are also neighbors in Fayetteville.

“I’ll tell you about him: He’s loyal. He’s a good recruiter. He’s a hard worker,” Pittman said. “Our special teams will get better. I think last year, especially through the covid and not knowing exactly who you have each and every week and sometimes you lose a few players on Friday, Scott did an outstanding job.”

Pittman gave a special shout-out to Walker and Ellis.

“Those two guys have done a great job with us,” he said. “The weight room is for a lot of reasons. The biggest reason I know is for confidence. You’re building strength. You’re building weight. You’re … getting them in shape, but you’re also building that confidence, and that’s something I felt like the University of Arkansas football team needed.”

Alabama Coach Nick Saban said new offensive coordinator Bill O’Brien is adapting his philosophies into the current Crimson Tide schemes, not the other way around.

He noted that previous Alabama offensive coordinators Lane Kiffin and Steve Sarkisian also had NFL backgrounds and that the principles on both levels of football are similar.

“I think the difference is in the NFL it’s how you bring players to the team and you’re coaching a different kind of guy, and the whole philosophy of developing players is not the same as it is in college.

“I think they want to develop players. They don’t have the same opportunity to do it personally, academically and athletically. It’s a whole different dynamic, and the football part isn’t all that different.”

Texas A&M Coach Jimbo Fisher made a joking reference to players being financially rewarded prior to the NCAA’s adopting name, image and likeness rules that allow them to be paid.

“Heck, some people have been doing name, image and likeness for a long time,” Fisher said. “Just they ain’t telling nobody. Now we’re all on an equal playing field.”

The Florida-LSU game is among the fiercest and most competitive of all the cross-division rivalries in the SEC, and Gators linebacker Ventrell Miller had some bold talk about how he thinks this year’s game will unfold.

“I’m looking forward to it,” Miller said. “Like I said, we got a bad taste in our mouth from last year, so definitely we coming out with some vengeance. We’re going to win that game.”

Canada’s strict travel restrictions due to the coronavirus pandemic has meant Alabama receiver John Metchie hasn’t been able to see his family in quite some time.

“Oh, man, it might be around two-ish years,” said Metchie, a junior from Brampton, Canada. “It has been tough, but I definitely always remind myself that even since high school, going to a boarding school [in New Jersey], I’m definitely working here to make a sacrifice for my family, and hopefully one day it could pay off for them.”

Georgia defensive lineman Jordan Davis is massive at 6-6, 340 pounds, but he tries to eat right.

“I hate vegetables, but I put them in a smoothie and drink them,” said Davis, whose return in 2021 was surprising to many who thought he’d enter the NFL Draft.

Davis talked about food a good bit, even his snacking preferences, during his appearance in Hoover.

“I’m a guy who’ll stay up late,” Davis said. “I stay up, I play video games, I make beats. I’m a snacker. So I’ll go in the kitchen and grab Swedish Fish or some Nerds Ropes.

“I have to switch that. They have organic Swedish Fish that I’m really starting to like. That definitely helps out. I don’t feel guilty when I eat it as when I eat the regular ones.”

The upcoming season is an off year for introducing new rules in college football, but player-safety rules can be implemented any season. One such rule will apply to overtime in 2021, SEC coordinator of officials John McDaid pointed out Tuesday.

Daniels noted the name, image and likeness (NIL) opportunities started July 1 and he entered pre-season mode the month before.

“I think for me and really a lot of guys that I’ve talked to, being that it came out July 1, it makes it pretty difficult to do anything for it,” Daniels said. “Like for me, season mode kicks in June 1, when you come back from your May break because that May break is the only time you have off for the rest of the year. Like I won’t leave Athens unless it’s an away game really until after the season.

“So we’re fully in season mode. I wish I could give you more about NIL, but it’s just not a huge focus for really a lot of people that I’ve talked to.”

Many athletes across the SEC have been announcing sponsorship deals in the past three weeks, with Alabama Coach Nick Saban saying Tide quarterback Bryce Young’s deals were approaching seven figures last week.

Perhaps the game-deciding play in LSU’s 37-34 win at Florida in the fog Dec. 12 came when Gators’ cornerback Marco Wilson ripped off the helmet of LSU’s Kole Taylor on an unsuccessful third-down play and fired it down the field. The incident triggered an unsportsmanlike conduct penalty, and the Tigers used the automatic first down and improved field position to win on Cade York’s 57-yard field goal six plays later with 23 seconds remaining.

“I’ve never been in a game where that happened, but it was just somebody got caught up in their emotions,” Florida defensive lineman Zach Carter said. “People get very passionate for the game, and you can make a mistake sometimes. No, I’ve never been a part of that though.”

Georgia Coach Kirby Smart referenced his relationship to the rapper Quavo, real name Quavious Keyate Marshall, who is from Athens, Ga., when talking about athletes being careful with how they handle their name, image and likeness (NIL) opportunities.

“I got a text from Quavo, who’s an avid Georgia fan,” Smart said. “A lot of people in this room probably don’t know who Quavo is.

“The first text I got was two weeks after NIL started, and he said, ‘Coach, please tell the players be selective who they put their brand with. Don’t just do anything.’ He used the term ‘thirsty.’ Don’t be thirsty. Be selective in what you do, selective in how you handle your branding. You’ve got tax issues now you’ve got to deal with.”

Former Vanderbilt coach Derek Mason has stayed in the SEC, returning to his former role as a defensive coordinator, this time on first-year Auburn Coach Bryan Harsin’s staff.

Vanderbilt defensive tackle Daevion Davis was asked about his thoughts on Mason, who made his name as defensive coordinator at Stanford before leading the Commodores to a 27-55 record in seven seasons.

“My experience with Coach Derek Mason was awesome,” Davis said. “He recruited me pretty heavy, and I love the guy. He was a fair guy, a great dude, very enthusiastic and loved the game, so I think Auburn got a great deal with that, and he’ll go in there and coach guys up real hard and get the best out of them.”

Florida added transfer kicker Jace Christmann as a graduate transfer over the winter, reuniting him with Coach Dan Mullen.

Christmann originally signed with Mullen’s Mississippi State program in 2017. He went 32 of 40 on field goals with a career long of 51 yards and 127 career extra points as a three-year starter, but he lost his job to Brandon Ruiz under first-year Coach Mike Leach last season. Ruiz was 10 of 12 on field goals, 24 of 24 on extra points and had 37 touchbacks on 43 kickoffs last year.

Vanderbilt struggled against its SEC-only schedule with an 0-9 record under Derek Mason in 2020 and the statistics bear that out.

The Commodores had two interceptions against 315 passing opportunities last year, which works out to a 0.6% interception rate to rank last in the SEC and 125th nationally.

Mississippi State Coach Mike Leach is not a fan of the four-team playoff, and the ongoing discussion in NCAA circles regarding a potential 12-team playoff isn’t enough for him.

“It’s never enough,” Leach said. “I’ll tell you, Dr. [Mark] Keenum, our president, is on that committee, so I know they’re in good hands. I think that part’s outstanding.

Arkansas linebacker Grant Morgan touted the ability of Levi Draper, who was coming off shoulder surgery last year, to help the roster this season.

“He’s fast, he runs really well, he’s dropped his weight back down to linebacker weight and he’s shredded again,” Morgan said. “He’s looking like the part he came here to be.”

Morgan said Draper also beat him on the bench press earlier this week.

“I think he was at 390 or something and I was right below it,” Morgan said.