What took Texas and Oklahoma so long? 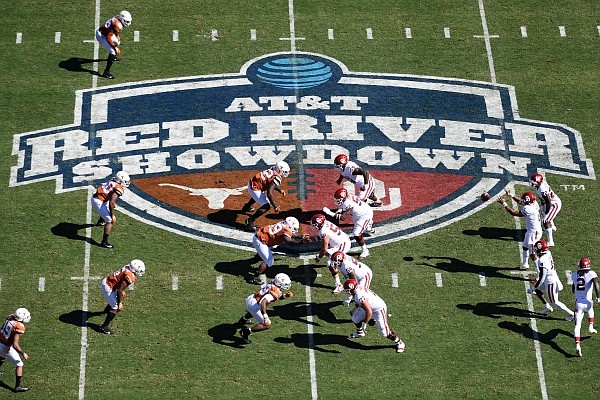 In this Oct. 12, 2019 photo, Oklahoma, on the right, runs a play against Texas in the first half of an NCAA college football game at the Cotton Bowl in Dallas. (AP Photo/Jeffrey McWhorter, File)

Among the most famous Frank Broyles quotes seems incredibly relevant as Texas and Oklahoma pour on the steam toward SEC membership.

After John Barnhill introduced Broyles as new Arkansas coach in December of 1957, there was mention of the telephone call offer.

“Barnie, what took you so long?” Broyles said he told his new athletic director.

It was a reminder that Broyles had expressed extreme desire for the Arkansas job three years earlier when they met at a Cotton Bowl function.

Broyles would no doubt say the same thing if he was around today, but the former UA athletic director would be talking about the Longhorns and Sooners. What took them so long?

The Longhorns had promised to come with the Razorbacks when the SEC formally expanded in August of 1990. State politics – with a governor with Baylor ties – blocked UT’s move. Broyles thought the deal he orchestrated with SEC commissioner Roy Kramer included both Texas and Texas A&M.

Back to the future, Texas is good for the SEC and for Arkansas. So is Oklahoma. I am on record for my complete distaste for all things Longhorn, but recognize true value that school brings to the Razorbacks.

Just back from a fishing vacation to Colorado and Wyoming, there was a call to my best fishing buddy so we could compare reports over the last two weeks. There was also talk with Louis Campbell about the Texas-Oklahoma news.

I agree with the former Arkansas player and coach on what Broyles would say about the latter. Broyles would tell us again why Texas should come to the SEC. Yes, Broyles called Texas “arrogant” and hated the way the school’s brass treated Arkansas in league meetings.

But money is the issue and Texas grows the pot. Those SEC checks are the magic elixir.

“Coach Broyles would definitely tell us, ‘I told you so,’ about this move by Texas and Oklahoma,” Campbell said. “He knew the SEC was the right place even before the first SEC check came, but he definitely said it louder when the checks came.

“It’s the same thing now as it was in the early ‘90s. We are so desperate to sell tickets. The old folks with the money to make donations and to buy tickets are going to spend money for Texas tickets and they will probably do that for Oklahoma tickets, too.”

The key is the same as it was when Jack Crowe was assigned an SEC schedule. Arkansas coach Sam Pittman and his staff must continue to recruit big, powerful linemen.

That’s what I noticed about SEC teams: what my dad always called “the haunches.” That’s what made Texas teams – and the Oklahoma teams I covered in the 1980s – so tough. Defensive tackles and offensive guards/tackles in the SEC all look like Freddie Childress (for old timers) or Shawn Andrews (for the younger set).

I don’t think adding Texas and Oklahoma makes it tougher. You can only play 12 games, probably still eight against SEC teams.

My father, the late Orville Henry, wrote accurately at the announcement ceremony at the UA Board of Trustees meeting that an SEC schedule would be like playing Texas every week.

If the Hogs improve enough to beat Alabama, Florida, Georgia, LSU, Texas A&M and Auburn on a regular basis, playing Texas and Oklahoma won’t be anything worse.

And, remember this, Texas and Oklahoma have to play those same teams every week. That will take a toll.

Recruiting should be buoyed on two fronts. There will be more money. The league check might be doubled and tickets should be easier to sell. More money will help recruiting.

Arkansas recruiting should benefit from the perception of a stronger SEC with Texas and Oklahoma in both those states among high school coaches and players.

It is obvious Pittman intends to recruit the Sooner State with vigor. There are good results there with six players in the latest UA class from Oklahoma.

Sure, Texas, Oklahoma and Texas A&M are going to sell SEC competition to Lone Star recruits, but Arkansas should be able to use all of this to its benefit against the likes of Baylor, Texas Tech and TCU.

There are others with a heavy recruiting successes in Texas that will take a hit, like Nebraska, Colorado and several Big 10 schools.

The biggest negative of Texas (and probably Oklahoma) is the complete arrogance of their leadership (and fans). But what those two did to the Southwest Conference and the Big 8 can’t happen in the SEC. It’s always been one vote, one school and not instant cave to one heavyweight.

The pie has always been split evenly in the SEC. Because it’s so big, that’s not a problem. Alabama doesn’t need more than its one share. Texas and Oklahoma will get by, too, and they may learn to like an even playing field.

When that first check comes, they probably won’t say thank you to Frank Broyles or any one else. That’s their arrogance. But they should. He tried to tell them three decades back.