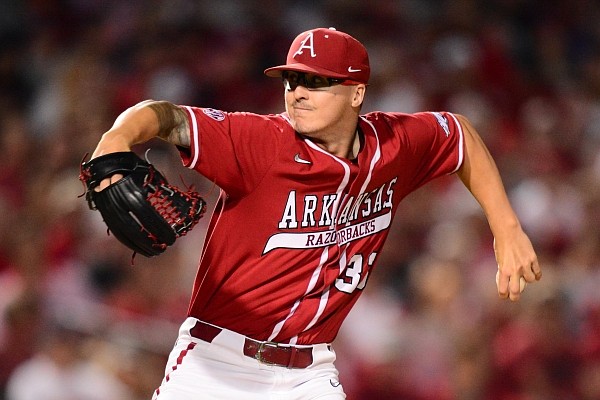 Arkansas left hander Patrick Wicklander delivers a pitch during a game against Nebraska in the NCAA Fayetteville Regional at Baum-Walker Stadium on June 5, 2021.

FAYETTEVILLE — Arkansas baseball’s No. 1 starting pitcher in 2021 and a high school signee are the latest players with Razorbacks ties to sign professional deals following the MLB Draft.

Left-handed pitcher Patrick Wicklander signed with the Tampa Bay Rays for $147,500, according to MLB.com writer Jim Callis. The slot value for the 251st overall pick is $163,400.

Wicklander was Arkansas' ace starter last season, finishing with a 7-1 record and 2.09 ERA. He began the season as a reliever, but worked his way into the starting rotation for the third year in a row, thriving in his first season pitching with diagnosed Type 1 diabetes.

Braylon Bishop, an outfielder signee from Texarkana, also signed with the Pittsburgh Pirates on Tuesday for $268,700. He was selected in the 14th round of the draft.

Bishop was ranked as the Razorbacks' third-best prospect by Baseball America, 88th overall. He committed to Arkansas on Dec. 16, 2017, when he was 15.

On July 13, Bishop said he would “for sure be at Arkansas,” and his goal was to “try to take over where (Christian) Franklin has left off.”

Right-handed pitcher Elijah Trest, a 19th-round pick of the Colorado Rockies, is the only Razorback taken in this year’s draft who has not signed a deal.