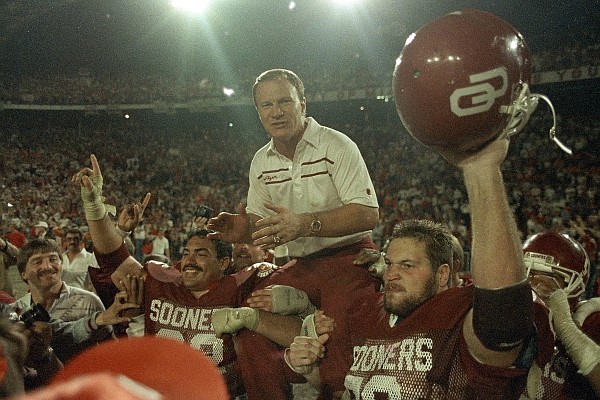 Barry Switzer still had one major question when asked about the blockbuster Texas-Oklahoma move to the SEC that is now close to reality.

“What will the four-team pods look like?” Switzer said in a phone interview this week. “Would they put Texas and Texas A&M together? It sure looked like the Aggies ran from (Texas with the move to the SEC).”

The legendary Oklahoma head coach – and Arkansas player and assistant coach – wondered where the SEC office would put his two favorite teams.

Switzer is one of those rare humans that have love for both schools, rooting for both the Sooners and Razorbacks to be successful. He keeps his ties in his birth state with business interests there, along with his adopted state where he won national championships and became legend.

Don’t forget that Switzer was on the 1964 staff when Frank Broyles led the Razorbacks to the national championship. He is emotional when he talks about Broyles and his Razorback teammates, or the men he coached with at Arkansas.

Asked if the Texas-Oklahoma move was a good thing for the Razorbacks, the Norman resident said there were no negatives.

“I’m glad to see this,” Switzer said. “I think it helps Arkansas. It can’t hurt.

“First, it expands their recruiting territory. Now there is little doubt in my mind that Oklahoma and Texas are going to continue to get five-star players. But there are lots of good players left and Arkansas has won with those good players before and will again.

“What it does most is hurt Oklahoma State a hell of a lot. And that helps Arkansas.”

Switzer pointed out that OSU has won with Texas talent, perhaps getting just the players that Arkansas could now get. It could be that they get players from Oklahoma that the Cowboys have signed.

“I believe that,” he said. “I really don’t know what OSU is going to do about it.”

Apparently, the most expressed thoughts by OSU brass – and supporters – is that they will run from the Sooners and Longhorns in anger. It seems clear that the Cowboys want to abandon their series with OU and don’t even bother to address thoughts of playing Texas.

Interestingly, Arkansas and Oklahoma State are contracted to play each other four times in the future. They’ll meet in Stillwater in 2024 with a Fayetteville date in 2027. They also have a contract for 2032-33.

Who knows if those games will still be played? Anything SEC related makes the Cowboys mad over the last couple of weeks. They were surprised.

“They know all of this was going on behind their backs for months,” Switzer said of the Cowboys.

Told the Cowboys don’t want to play the Sooners anymore, the PG version of Switzer’s response was to heck with them.

“I’m not sure how Texas is going to do in the SEC,” he said. “With (new Texas coach) Steve Sarkisian there are positives and negatives.”

This news didn’t just catch the Cowboys off guard. Switzer said it was a surprise to him, too.

“I did hear rumors,” Switzer said. “I still have good friends (at Oklahoma) and I called them to check on this because there was some speculation (in Norman) through the years.

“When I talked to the people in the athletic department I’d think would know, they told me it was misinformation, there was nothing to it.

“I believe it’s good for Oklahoma. (Athletic director) Joe Castiglione has done a great job and (OU fans) should follow his lead.

“But I’m glad to see them do it. Oklahoma has dominated the Big 12. Let’s find out if they can do that in the SEC. I don’t see it.”

What he really wants to see are those four-team pods.