Brewer cherishes call that brought him across the street 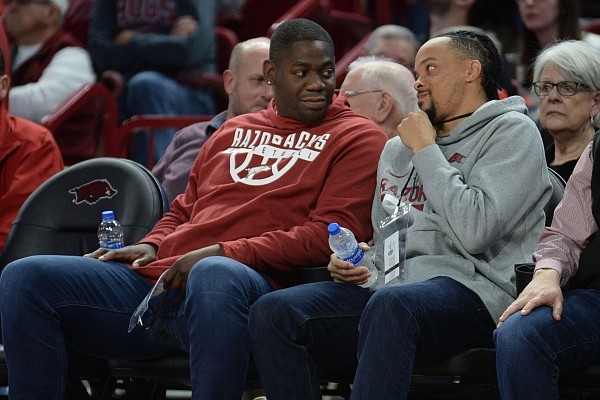 FAYETTEVILLE — Ronnie Brewer had hoped to be added to University of Arkansas Coach Eric Musselman’s staff in June when Earl Boykins resigned as director of player development to become an assistant coach at Texas-El Paso.

Musselman filled that opening by hiring Mike Ekanem from Texas A&M. Ekanem had worked previously for Musselman at Nevada.

But Brewer didn’t have to wait long to be hired by Musselman for a different position.

“He doubled back and came to me like, ‘I have another opening,’” Brewer said Wednesday.

Brewer, a former All-SEC guard for the Razorbacks and an NBA player who starred at Fayetteville High School, was hired last week as Arkansas’ recruiting coordinator with Pat Ackerman deciding to move on from being on the basketball staff.

“I’ve always been a fan of Muss,” Brewer said. “I’m a Razorback alum, fan through and through.

“If I wasn’t a part of the staff, I still would be coming to practice, still supporting the Razorbacks and still pouring into these young student-athletes. [Being hired by Musselman] was a dream come true, and I’m very happy to be in the position I am right now.”

Before returning to the UA, Brewer was an assistant coach at Fayetteville and also coached the Woodz Elite Under-16 AAU team.

With Fayetteville High School being across the street from Walton Arena, Brewer said he was able to attend Arkansas practices and build a relationship with Musselman and his staff.

“I’m very excited to join Coach Musselman’s staff, and I’m going to pour all my heart and effort into matching his intensity,” he said.

Brewer said his high school and AAU coaching experience will be an immediate help to him in recruiting.

“I think I have pretty good relationships,” he said. “I know a lot of people. Being able to travel around the United States, seeing these guys playing at a high level, having relationships with the coaches, meeting the players, meeting high school coaches, I think it goes a long way.

“It’s throwing fuel on the fire making me want to grind and work a little bit harder to make sure I get this right the first time around,” he said.

Brewer said he’ll be working hand in hand in with Arkansas recruiting director Michael Musselman as well as other staff members in evaluating recruits and determining which ones are the right fit for the Razorbacks.

“There are a lot of different responsibilities that I have,” Brewer said. “But at the end of the day, we’re all working to try to bring the best student-athletes on campus as well as developing the student-athletes we have at the University of Arkansas right now.”

Brewer, 36, said ultimately he hopes to be a college coach.

“Who better to learn from than Coach Musselman and his staff?” he said. “Those guys are phenomenal.

“These student-athletes are blessed to be under Coach Musselman as well as the other assistants. It’s a great position for me to be in to be a sponge with all the knowledge these guys are putting out every day.”

Brewer isn’t able to do any coaching on the court, but he can attend practices and talk with the players about his observations.

“The biggest thing for me is the mentorship,” Brewer said. “When the guys are walking off the court, being able to talk to them about the stuff I see.

“Or when they’re in the locker room, ‘All right, man, you had a phenomenal practice, but I think you might need to do this and this.’ Or, ‘This is an approach you might need to take in juggling academics. Strength and conditioning, getting your body right and putting the work in on the court.’“

Brewer said he’s eager to talk with players about the opportunities they have to profit from their name, image and likeness now allowed under new NCAA rules.

Brewer said he hopes to help Arkansas win a national championship under Musselman. The Razorbacks’ only NCAA basketball title was in 1994.

“It would mean a lot to be able to assemble a top recruiting class that eventually goes on to win a national championship, because I know that is Coach Muss’ goal and I know that’s the players’ goal here,” Brewer said. “That’s for sure a goal of mine.”