A perfect fit: Moody drafted by Warriors with No. 14 pick 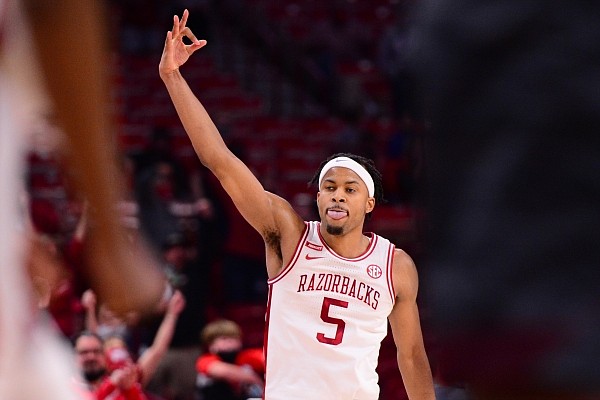 Moses Moody, the star freshman shooting guard from Little Rock who led the Razorbacks in scoring in 2020-21, was selected No. 14 overall by the Golden State Warriors in the NBA Draft on Thursday.

Arkansas coach Eric Musselman said Golden State was the franchise that spoke with he and his staff most frequently about Moody.

"He was such a good teammate for us," Musselman told reporters at a watch party at his home. "To think that a freshman would lead us in scoring and be one of our most unselfish players and to watch his growth throughout the year that he was with us, I think every Razorback fan should be proud of Moses. Anybody after a freshman year that becomes a lottery pick is really, really, really special. It’s hard to do.

"He’s going to an incredible organization, playing with some incredible vets — Steph Curry and Klay Thompson, those guys are the truest professionals. I really believe he fits in really well with their style of play because he can move with out the ball, they love shooting, they love guys that play position-less basketball."

Moody is the eighth Arkansas player to be drafted since 2000, and this draft marks the first time since 1983-85 that the Razorbacks have had a player selected in three consecutive years. Daniel Gafford was drafted in the second round by the Chicago Bulls in 2019 and Isaiah Joe went to the Philadelphia 76ers in the second round in November.

He is the Razorbacks’ first lottery pick since Ronnie Brewer, who was hired last week as the program’s recruiting coordinator, in 2006.

Following a pre-draft workout with the Warriors earlier this month, Moody said he believed he was a perfect fit with the team.

"I like to run the floor, space the floor and knock down shots, and when guys have lots of shooters on the floor you’ve got to decide where you want to put attention, and if you don’t pick me then I get open shots and get a lot of good looks," he said. "It also creates a lot of driving lanes and just makes the game a lot easier in a system like this.

"They develop their guys really well, and it’s almost like a head start just because you’re in this system that works. You’re learning how to play basketball at the highest level and the best way. I feel like that puts you at an advantage just being in this environment and this community."

Moody declared for the NBA Draft on April 9, 11 days after helping the Razorbacks reach the Elite Eight of the NCAA Tournament for the first time since 1995. He averaged a team-high 16.8 points per game and finished second in rebounding at 5.8 per game.

He is one of six Razorbacks freshmen to lead his team in scoring, joining Johnson, Jonathan Modica, Scotty Thurman, Beverley and George Kok. He scored 28 points in back-to-back games against South Carolina and Texas A&M to close the regular season, and 28 vs. LSU in the SEC Tournament.