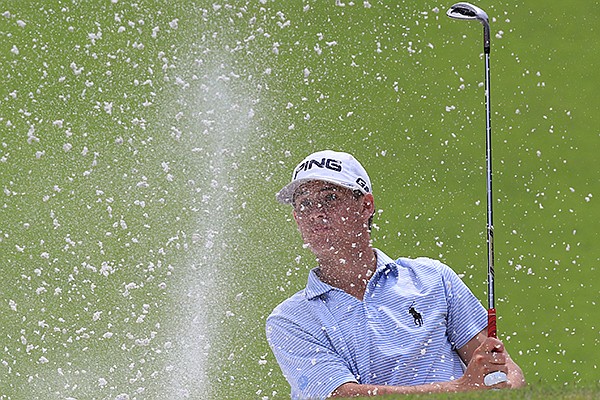 Taylor Moore blasts out of a sand trap near the 8th green in the fourth round of the Western Amateur at the Alotian Club in Roland, Ark.

It’s an off week for the Korn Ferry Tour before the final four events of the wrap-around 2020-21 season.

That gives Taylor Moore a few days to celebrate his 28th birthday, but the former Arkansas golfer might not want a stop in fear of cooling off. Taylor was 52-under in his last two tournaments.

Moore, an Edmond product living in Dallas, has skyrocketed to the No. 4 position on the standings with a first and second in his last two events on the PGA Tour’s second circuit. His win two weeks ago followed a win by UA alum Tag Ridings.

The 2016 UA graduate with the Razorback roots – dad Rod played baseball for Norm DeBriyn and mom Melinda was a UA cheerleader – has stacked 11 top 10s this season to earn $458,516.

More importantly, Moore has clinched his spot on the PGA Tour next season. It’s validation for a decision from his teenage years to pick golf over his dad’s best sport, something that surprised many.

“I really loved baseball,” Moore said. “But I made the right decision. I don’t know if I’m tough enough to have made it through a Dave Van Horn practice.”

That last part was a joke. Everyone thinks Moore is plenty tough. And, he was athletic enough to perhaps star as a middle infielder at Arkansas. He was a three-sport star at Edmond Memorial, with serious hops on the basketball court as a point guard.

Moore enrolled at Arkansas as the nation’s No. 2 golf prospect in the class of 2012. He won 14 high school tournaments and shared SEC freshman of the year honors. Yet, he didn’t win a college tournament until the final month of his four seasons.

Looking back at those four years under coach Brad McMakin – still a close friend – there was no second guesses.

“I needed all four of those years,” Moore said. “Looking back, I had tons of things to work on when I came to college and I improved in everything.

“To be honest, I needed college because I’d never fully concentrated on golf,” he said. “I didn’t know course management. I had to get stronger. I had to grow.

“I’d played so much baseball and basketball. I’d played a lot of travel ball in baseball. It took me awhile to figure out college golf in what is the toughest conference in the country.”

Rod and Melinda liked it that Taylor was getting a degree anyway. And, since they traveled to football, basketball and baseball games, it wasn’t like Taylor was really that far away.

It was also a chance for Taylor to fix some things in his swing and learn practice routines that still pay dividends. Rod said Taylor has never been afraid to leave “good to go for great.”

At 5-9, 160 pounds, Moore was willing to look for extra yardage off the tee against the big players who dominate college golf. He knew bombers dominated the PGA Tour.

Ironically, Moore’s current hot streak has not been fueled by length. After averaging in the 315-yard range early in his Korn Ferry attempts, he’s slowed things down to average 305 this season.

“That’s long enough,” Rod said. “I think what we’ve seen is that he stays in himself more and he’s hitting more fairways.”

“I’m still over 300 yards, but I’m hitting 70% of my fairways,” he said. “Then I can play to my strengths, my irons. I have pretty good distance control with my irons.”

The hot streak began after a couple of seasons of struggling to find consistency. Two different stops – one because of the covid-19 break and another because of injury – didn’t help.

The turnaround happened after a missed cut in Broussard, La., in the middle of March. Moore called an old friend, pro Brian Soerensen, director of golf at KickingBird Golf Course in Edmond.

“He’d taught me in high school and he’s probably my dad’s best friend,” Moore said. “He was always my teacher, but when I turned pro, he couldn’t travel and I went a different direction.

“I was driving home from Louisiana and I called Brian. We decided not to wait until I got all the way to Edmond and he met me in Norman. We grinded it out for four hours.”

There were a couple of minor technical adjustments, mainly not keeping his left arm so tight to his body on the takeaway.

“I think what he told me that helped was that I should try to swing like Taylor Moore and not Justin Thomas one week or Dustin Johnson the next,” Moore said. “He said that Taylor Moore’s swing was good enough.”

Good enough is correct. Of late, there have been lots of low rounds. He birdied eight of his final 11 holes to finish second last week in Springfield, Mo., with a closing 10-under 62. He shot 60 in the third round to set up a victory the previous week in Springfield, Ill.

Moore finished sixth the week after working with Soerensen in March to start his current hot streak. It’s been a slow build with more birdies every week.

“I’ve had a couple of really good months,” he said. “And then I started playing really good. I’ve just kept my foot on the gas.

“What I’d say about right now, I just feel the ball sticking to the face of my club a long time. I’m hitting it more solid and more consistent. I’m sticking with my blueprint, which is my ball striking.”

Obviously, everything is going well.

“What I see is that everyone around him is really solid,” Rod Moore said. “It’s not one thing. It’s Brian’s help, but he’s got someone helping with putting, a mental coach and a new caddie.”

“He’s given me drills and techniques and a way to maximize my practice time,” Taylor said. “I’m holing more putts.”

“I’m stuffing it some, but the putting is solid,” he said.

Stacy Lewis, Arkansas grad on the LPGA Tour, gave him the recommendation that led to hiring caddie Chris Tischenor.

“I was struggling in 2020 and had no physical limitations,” Moore said. “That was frustrating. She helped me with some weekly sessions. She had a background as a mental coach in several sports.”

It started with goal setting.

“We took a full day to write them down,” Moore said. “Some are long term, but a lot of them are day in and day out, how to become consistent with an off-course routine.”

There was some work on breathing exercises, too.

“I’ve never been big on meditating, but that’s part of what she gave me to do,” Moore said. “That was awkward at first, but it really helped with my breathing.

“I think my problem was that I’d never gotten my mind to be still. The breathing stuff on the course helped.”

No doubt, Moore is breathing rare air right now. He’s exempt for the PGA Tour and piling up money.

“I don’t think I need to change anything I’m doing,” he said. “The blueprint I have will work on that tour.

“The Korn Ferry is a little different. You have to make birdies here and the (PGA Tour) will have some of that, but for the most part will be more difficult courses.

“I just know that I have to keep hitting fairways and greens. I’m in a comfortable spot right now.”

The week off allowed for some rest, but also a little time to look around with what’s happening in his old conference.

“It sure did,” he said. “I keep up with everything with the Razorbacks. I stream all the games no matter where I’m at and I try to get to campus and hang out with Coach McMakin.

“It’s been great fun to watch our teams win this past season.”

There is constant chatter with his dad about the way the Hogs rolled through the SEC in baseball this season.

“Brian and I grew up playing together. We text a lot. I text with Andrew Benintendi, too. I’m a good friend with Brandon Allen, too.”

As far as baseball talk, Taylor ribs his dad about the way the home run has crept into the college game.

“He played with Jeff King at Arkansas and talked about his home runs on top of the HPER Building,” Taylor said. “Then in the next sentence he’s telling me that we don’t bunt enough.

“I really don’t want to hear it because everyone can see the game has changed. It’s at all levels. The home run dominates. You play for the big inning.”

“I do, but there are still times for the bunt,” he said. “I guess it goes back to the way I had to play the game. I led the SWC in bunt singles because I couldn’t hit a change-up.”

Taylor can hit the long ball on the golf course. He’s never been short off the tee. But dialing back on the power has been part of his hot streak this season.

“I am 50th in distance after finishing top seven my first two seasons,” Moore said. “But what’s important is I’m second in total driving (a combination of distance and accuracy).”

Hitting every fairway and green in a round is a regular thing of late. There have been few big numbers. That bodes well for his future.

Moore’s take is that most on the PGA Tour make plenty of birdies, but those in the top 20 “are not hitting many truly bad shots.”

It’s fun to think about, just like Moore is excited about Texas and Oklahoma moving to the SEC.

“I’ve got questions, though,” Moore said. “Who will they pair my Hogs with? I prefer that they give us Missouri, Ole Miss and Mississippi State.

“But it really doesn’t matter because at some point you have to start beating the big boys.”

Taylor Moore may be doing that soon.