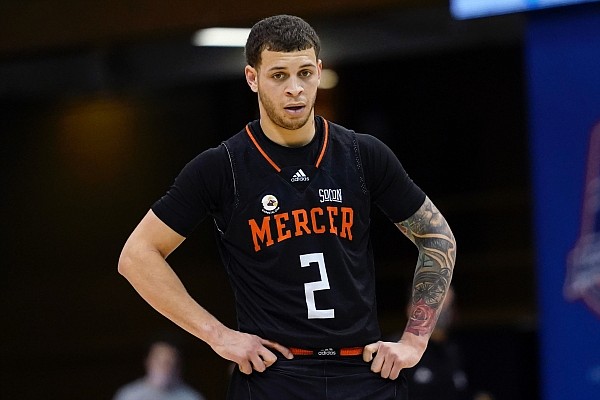 Mercer guard Neftali Alvarez (2) on the court against UNC-Greensboro in the first half of an NCAA men's college basketball championship game for the Southern Conference tournament, Monday, March 8, 2021, in Asheville, N.C. (AP Photo/Kathy Kmonicek)

FAYETTEVILLE — Arkansas’ men’s basketball team will open the 2021-22 season against Mercer, according to a report.

It will be the first game between the programs in Fayetteville since 1999.

Mercer finished the 2020-21 season at 18-11 overall and 8-9 in Southern Conference play. The Bears have not made the NCAA Tournament since 2014, their final season in the Atlantic Sun Conference.

Mercer will return two of its top four scorers from a season ago. Neftali Alvarez, a 6-2 guard, averaged 13.3 points per game on 44.7% shooting, and 6-9 forward Felipe Haase added 11.9 points and a team-high 7.6 rebounds.

Haase knocked down 59 three-pointers last season, the most among players who are returning, and shot 39.3% beyond the arc.

The Razorbacks also have scheduled nonconference home games against Gardner-Webb on Nov. 13; Central Arkansas on Dec. 1; Elon on Dec. 21; and West Virginia on Jan. 29 as part of the Big 12/SEC Challenge.

Arkansas is scheduled to play Kansas State on Nov. 22 and Illinois or Cincinnati the following day at the Hall of Fame Classic in Kansas City, and Oklahoma on Dec. 11 in Tulsa.