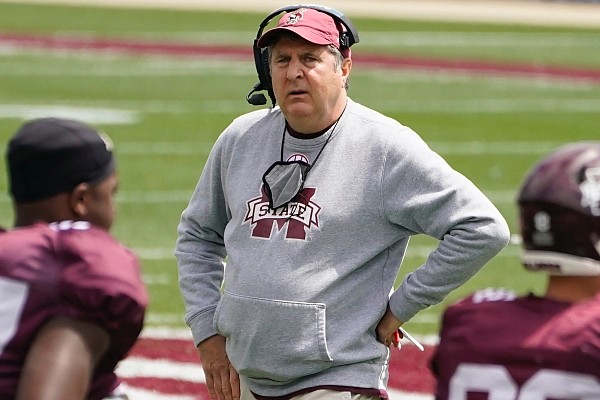 HOOVER, Ala. — Ever since “Air Raid” pioneer Hal Mumme’s tenure at Kentucky ended in 2000, many wondered what a more modern version of that offense would look like in the SEC.

They got their answer with first-year Coach Mike Leach at Mississippi State in a season opener Sept. 26.

Matching up against an LSU defense that stubbornly stuck to a man-to-man scheme, the Bulldogs ran circles around the defending national champions, striking for a 44-34 upset of the Tigers in Baton Rouge. Quarterback KJ Costello’s 623 passing yards broke former Georgia quarterback Eric Zeier’s league record by 79 yards, and the Bulldogs’ team total surpassed the single-game SEC passing mark of 585 yards set by Kentucky in 1998 with Leach in his second year as offensive coordinator.

The Mississippi State athletic communications department struck while the iron was hot, quickly filming and airing a spot of Leach holding a cowbell and sitting at the front of a wagon.

Mississippi State at a glance

SEC West title scenario To begin with, the play in both sets of trenches must be better. Quarterback Will Rogers will need to have a spectacular year as a distributor for the Bulldogs to have a chance.

“Looking for a bandwagon? Hop on,” Leach said in the 50-second promotional video.

The shelf life for the bandwagon video lasted one week.

Seven days after shredding the Tigers, Costello passed for 313 yards but also threw 3 interceptions — including a 69-yard pick-six by Greg Brooks Jr. that opened the scoring — against the Arkansas Razorbacks’ drop eight zone scheme. The Bulldogs also struggled in the red zone in a 21-14 home loss.

The reality of Mississippi State’s largely unproven roster — one of the youngest in the FBS ranks — set in. Costello eventually was replaced by freshman Will Rogers, and the Bulldogs went on to beat just Vanderbilt and Missouri the rest of the regular season.

Leach, speaking at SEC Media Days, attributed the Bulldogs’ 4-7 record — which included a 28-26 win over Tulsa in the Armed Forces Bowl — to a shortage of prep time due to covid-19 restrictions and the green roster.

“We just had a short window and were a very young team,” Leach said. “I think that we just have to continue to improve and evolve as a team.”

The “Air Raid” offense scored 14 points or less in five games, including a 41-0 shutout at Alabama and a 24-2 loss at Kentucky, but Leach believes it can fly in the SEC.

“I think that there’s a reason that the NFL’s adopting so many ‘Air Raid’ concepts and that the last however many, probably 10 Super Bowls, there’s been a super number of ‘Air Raid’ concepts in all of them,” Leach said. “Because, in my mind, it’s an efficient way to move the football because you utilize personnel and utilize the space that you’re provided. So I think it’s a good way to do things.”

Leach said there was no “smoking gun” to explain the Bulldogs’ poor statistical season. Mississippi State ranked 13th in SEC scoring (21.4), 12th in total offense (340.2) and last in rushing with 43.9 yards per game, 66 fewer yards per game than Vanderbilt in 13th place.

“As far as a smoking gun, I think you’re always trying to improve,” Leach said. “One way to improve, at least in our case: Get older. Rather than be one of the youngest teams in the BCS, I think the youngest, get older. But I was very proud of the way they competed and improved as the season went on.”

Rogers, a 6-2, 210-pounder from Brandon, Miss., made six starts and broke the school record with three consecutive 30-completion games and the school freshman records with 1,976 passing yards and 239 completions.

Lack of experience and age should not be a factor this season. The Bulldogs have eight starters back on both sides of the ball, and Rogers has plenty of veteran hands for distributing the football.

The team’s two leading rushers Jo’Quavious Marks and Dillon Johnson are back, as are top receivers Jaden Walley, Austin Williams and Malik Heath.

Williams said Rogers performed well in a tough situation in 2020 and won the locker room.

“His strengths, he’s a leader,” Williams said. “Coming in as a freshman and he’s taken it over. He’s got the guys bought in. He’s a guy that’s first there, last to leave. He’s always watching film. He’s just a grinder. Everybody loves that and respects that about him.”

Leach said the top quality he likes in a quarterback is elevating the play of his 10 offensive teammates, and Rogers provides that.

“In Will’s case, we needed a guy that could go out there and play,” he said. “I thought he did a very good job, especially as far as being composed and played with a level of … at times looked more experienced, certainly, than he was.

“I think he steadily improves. He’s a tireless worker, works a great deal on his own. Also is one of those guys that does elevate the players around him.”

On defense, cornerbacks Martin Emerson and Emmanuel Forbes have the potential to match the best corner tandems in the conference.

Aaron Brule and Tyrus Wheat are both back at linebacker, ready to employ coordinator Zach Arnett’s schemes.

“It’s an attack-first mentality, meaning there’s no excuses for anything,” Brule said. “You either do what he asks you to do or you’ll be held accountable by your teammates, by him, and anyone involved with our defense.”

Brule said he doesn’t mind the “Air Raid” attracting all the headlines related to the Bulldogs.

“Truly they deserve the attention they get being with the ‘Air Raid’, I’d say the most successful offense of all time,” he said. “You don’t mind being a back burner to that.”