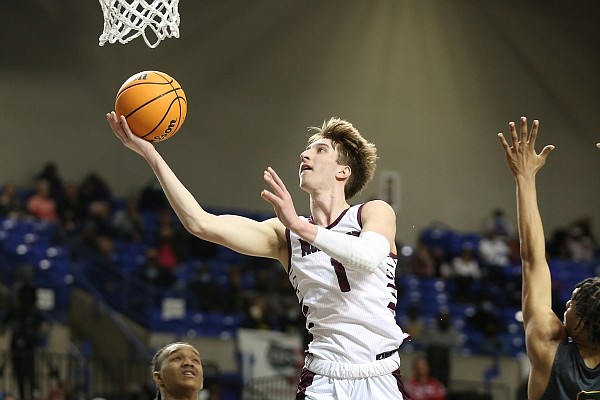 Morrilton's Joseph Pinion (1) lays in a shot over Mills' Jakari Livingston (5) during the fourth quarter of Mills' 49-46 win in the Class 4A boys state championship game on Saturday, March 10, 2021, at Bank OZK Arena in Hot Springs. More photos at www.arkansasonline.com/321boys4a/.

When he steps on campus, it will be the first time Pinon has visited since November 2019.

“I’ll be there up doing my best,” Pinion said. “I’ll hype up the place. Even though coach is going to show them the good stuff, I’ll tell them even more that I know.”

“They like Arkansas,” Pinion said. “They’re really excited about the opportunity.”

The ESPN 4-star averaged 22.5 points, 7.7 rebounds and 2.5 assists over the weekend while lading the 17-under Arkansas Hawks to a 3-1 record at the Memorial Day Classic in Atlanta. He said the Hawks are playing well after starting slow this spring.

“We started off a little bumpy on the road, but I feel like we’re really picking it up and we’re playing pretty good basketball,” Pinion said.