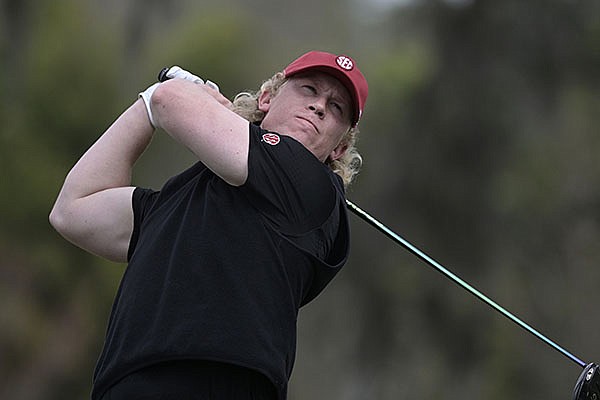 The University of Arkansas men’s golf team played until the final day of May, but that’s as far as the No. 23 Razorbacks could get.

Arkansas could not gain enough traction in tough scoring conditions, even with an ace from senior Tyson Reeder, at the NCAA Men’s Golf Championships at Grayhawk Golf Club in Scottsdale, Ariz., on Monday. The Razorbacks failed to make the cut to the eight-team match play.

The Razorbacks had their best round of the four days of stroke play with a 5-over 285 to finish at 33 over, eight strokes shy of the cut line.

Arkansas tied No. 22 Texas Tech for 11th, one shot behind Louisville and Sam Houston State, which tied for ninth at 32 over.

“We had two bad holes in the second round on six and seven, which kept us out of it, but it was a great team effort and I was super proud of the seniors coming through. We learned a lot and I think if we can make it back next year it’s going to be … beneficial to the guys coming back.”

No. 10 Arizona State caught fire with a 5 under on Monday to reach 3 under and surge past No. 3 Oklahoma State, which opened the final round with a 13-shot lead on No. 1 Oklahoma but carded a 12 over to fall to second.

Turk Pettit of Clemson shot even-par 70 on Monday, which was good enough to surpass Oklahoma State’s Bo Jin to win medalist honors at 7 under. Jin was next, one stroke behind, followed by Arizona State’s Ryggs Johnston (5 under), Illinois’ Michael Feagles (4 under) and Florida State’s top-ranked John Pak (3 under).

Reeder made a hole-in-one on the 188-yard 8th hole to reach 1 under for the day, which is where he finished the round. Reeder totaled 4 over for the tourney, tied for 22nd place.

Arkansas junior Julian Perico bounced back from a nonscoring 75 on Sunday to fire a 2-under 68 and vault 53 places into a tie for 44th at 10 over. Perico bogeyed just one hole, the difficult 18th, and had three birdies on the day. He tied Arkansas senior William Buhl, who shot a 74 on Monday.

Senior Mason Overstreet had the other scoring round for Arkansas, a 74 that included two birdies on the front nine where the Razorbacks finished.

Freshman Manuel Lozada, who led for much of the first round, faded on Monday with a nonscoring 77 to drop into a tie for 61st.

The match-play portion of the championships will feature only one SEC squad, conference champion and No. 11 Vanderbilt, which shot 24 over and finished seventh.

Match play starts today with Arizona State paired against 8 seed North Carolina, which finished at 25 over. Oklahoma State will take on Vanderbilt.