NCAA first-timers run into No. 1 Hogs 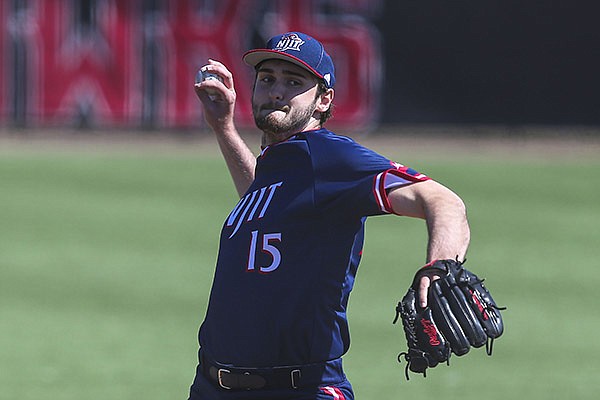 FAYETTEVILLE — Friday’s NCAA Fayetteville Regional game between the University of Arkansas and NJIT might have been a matchup of Razorbacks Coach Dave Van Horn against one of his former players.

But NJIT Coach Robbie McClellan turned down a scholarship offer from Nebraska in 2001 when Van Horn was the Cornhuskers’ coach.

Among the schools at the top of McClellan’s recruiting list after his sophomore year were Arizona State, Nebraska, Texas, LSU and Wichita State. He signed with Arizona State.

“I was kind of a late developer, so I went from being lightly recruited to recruited by everybody and their brother,” said McClellan, who is from Liberal, Kan. “If you would have told me six months before that I would have to tell the University of Nebraska ‘No,’ I would have told you that you were crazy. Calling and telling people with great programs that I wasn’t going to school there was kind of a weird deal for me.

“Now, it’s funny, I’m in college and you’re recruiting kids and you’re like, ‘Hey, just be honest with me. If you’re not interested, then let me know.’ “

“He’s one of the best — if not the best — in college baseball,” McClellan said. “So any person who goes and plays for him is lucky. He has a great track record of success.”

Van Horn has led Nebraska and Arkansas to a combined 21 NCAA Tournament appearances since 1999 and advanced to the College World Series eight times — the most of any active coach.

NJIT (New Jersey Institute of Technology) is playing in the NCAA Tournament for the first time.

NJIT (26-22) was the America East’s only unbeaten team in the conference tournament with a 2-0 record and victories over Albany and Maine.

McClellan is in his third season as the Highlanders’ head coach after being an assistant for seven years. The program moved up to Division I status in 2007.

“One of the things about NJIT is early on during its transition to Division I baseball, it wasn’t really known for winning,” said McClellan, who pitched in the minor leagues for five years before going into coaching in 2008. “As the years have gone on, there have been more and more wins.”

The 26 victories this season are an NJIT record.

“I’m just really proud to see the hard work really come out on the field,” McClellan said. “I’ve seen all of the ups and downs, and right now this is the biggest thing that has ever happened to NJIT baseball and we’re really excited to represent the America East in the regional.”

“Getting the bid to get into a regional, I think it’s what every kid that plays baseball dreams about doing,” Rappaport said. “We have that opportunity and we’re going down to play Arkansas — which has one of the best atmospheres in the country — and we’re ready to show the crowd there that we can play.”

The Razorbacks (46-10) are the No. 1 national seed after winning SEC regular-season and tournament championships.

“We’re going to play the University of Arkansas on their home field, so that’s opportunity,” McClellan said. “What we do with that opportunity is up to us.”

Senior right-hander Tyler Stafflinger (6-5, 3.77 ERA in 71 2/3 innings) will start against Arkansas, McClellan said, but it’s likely Rappaport will get into the game.

Rappaport is the Highlanders’ version of Arkansas closer Kevin Kopps, the SEC pitcher of the year who is 10-0 with 10 saves.

“I don’t want to speak out of turn here,” McClellan said of Kopps and Rappaport. “But I think you could argue just looking at their numbers that they’re the top two closers in the country.”

“Julio is our power source, but he’s also just a very consistent hitter,” McClellan said. “He can hit a fastball. He can hit a breaking ball. When he does well, we usually come out on top. So it’ll be important for him to have a good weekend.”

David Marcano, batting .236 with 1 home run and 15 RBI, missed 20 games with a wrist injury. His return to the lineup, McClellan said, has solidified the infield defense and is a big reason why NJIT is 18-4 in its past 22 games after starting 8-18.

“When David plays shortstop, everyone else is in their natural positions,” McClellan said. “When we didn’t have him … every time it seemed like the ball was hit to the person that was playing out of position.

“We just had a tough stretch of luck there, but with David back at shortstop, that’s when we took off as a team.”

The Marcano twins came to NJIT, located in Newark, N.J., from Katy, Texas.

“We have a very prestigious engineering school, and David and Julio both wanted to be engineers,” McClellan said. “They’re doing stuff that I could never even imagine doing in school. I think they’re building drones.”

The Highlanders have stolen 61 bases in 67 attempts, led by sophomore center fielder and leadoff hitter Albert Choi, who is 27 for 28 and batting .313.

“He’s a dynamic player,” McClellan said. “In my opinion, he’s in the top 10 fastest guys in college baseball.”

NJIT didn’t have fans at games for most of the season because of covid-19 safety protocols.

An attendance of 454 was listed on the box score for each of the Highlanders’ two America East Tournament games. The crowd for the Arkansas-NJIT game at Baum-Walker Stadium is expected to be 10,000 to 11,000.

“We’ve never played in front of a crowd with that many people,” Rappaport said. “For us to go out there and show people what we can do, we’re ready to feed off the energy.”