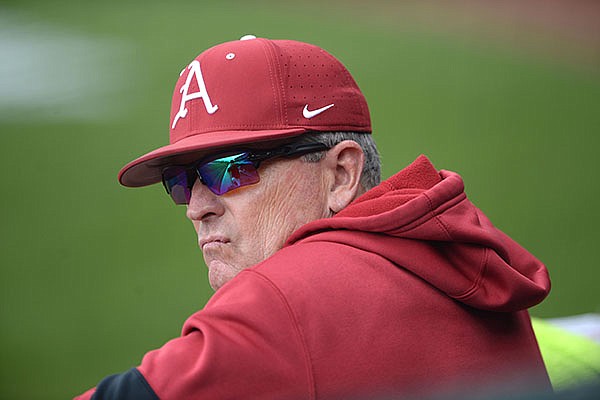 Arkansas baseball coach Dave Van Horn is shown prior to a game against Texas A&M on Saturday, April 17, 2021, in Fayetteville.

FAYETTEVILLE — Some University of Arkansas fans might be wondering why Arkansas is playing in the early game at 2 p.m. on Friday rather than in a more prime-time setting in the 7 p.m. game.

There’s a method to the decision making, with the host team being able to decide which start time it prefers in the opener.

“What goes into that is just the fact that it could be [bad] weather, more than anything,” Arkansas Coach Dave Van Horn said, describing a scenario where the night game could be postponed or suspended, forcing a team to play two games on the second day of a regional. “You’re sitting there and next thing you know it’s 2 in the morning and you’re not playing, then you’ve got to get up and play that game and then play another one later that day, whether you win or lose.

“So it might be a little more difficult on our fans getting to games, but I think our fan base understands it now.”

NJIT Coach Robbie McClellan announced Tuesday that he would start 6-1 right-hander Tyler Stafflinger, a senior from Manalapan, N.J., against the Razorbacks on Friday.

“He came back for his fifth year, so he’s a covid fifth year,” McClellan said. “He’s been in the rotation ever since he’s been here.

“He’s very poised. The situation never seems to get to him, good or bad. He throws a ton of strikes. He’s a three-pitch pitcher … and he’s a great competitor.”

Arkansas is the No. 1 seed for the NCAA Tournament for the first time.

The top national seed has lost its home regional three times since the NCAA modified the brackets to add super regionals for the 1999 tournament. The most recent of those losses came in 2015, when Maryland upset No. 1 UCLA.

NJIT (New Jersey Institute of Technology) does not have a home baseball stadium. The Highlanders of the America East Conference play their home games at Jim Hynes Stadium on the campus of Division III Kean University in Union, N.J.

NJIT went 10-8 in home games, which are played about 15 minutes away from its campus in downtown Newark, N.J.

The Highlanders had no fans at four of their five home series due to covid-19 restrictions. Parents of seniors were allowed to attend their final home series, a four-game sweep of the University of Maryland-Baltimore County on May 21-22.

The weather forecast indicates improving conditions in Northwest Arkansas leading into projected beautiful weather on the opening day of the NCAA Fayetteville Regional.

The forecast high for Friday’s regional openers is 81 degrees, with partly sunny skies, a 24% chance for rain and an overnight low of 61 degrees.

The No. 16 national seed Bulldogs are joined by North Carolina State, Alabama and Rider in that seeding order at J.C. Love Field.

The Razorbacks went 2-1 against both Louisiana Tech (on the road) and Alabama (at home) this season.

Arkansas Coach Dave Van Horn said retiring LSU Coach Paul Mainieri shared with him some of his thoughts regarding his health and his future prior to the first game of their series April 30.

“I’ve become pretty good friends with Paul over the years and really enjoyed competing against them,” Van Horn said. “He’s a class act. I like the way he runs his team. When you play Paul and LSU you were just playing baseball. There wasn’t a lot of the other little things going, on and I appreciate that a lot.

“I know he hasn’t been feeling real well. He’s had some neck problems and some surgeries and headaches, and he’d tell me about things. You know he had been contemplating this, thinking about it and trying to make a decision.”

Van Horn said he could tell Mainieri’s decision on whether to retire was weighing on him. Mainieri will coach the Tigers as the No. 3 seed at the Eugene (Ore.) Regional and through the postseason before retiring.

“Coaching at LSU, man, it’s a pressure cooker down there, obviously,” Van Horn said. “I think it is at a lot of places but probably down there a little more. I heard him say it and it’s true. When you win you win, when you lose it kills you.

“My advice to him was, ‘Do what you want to do. You’re only on this earth so long and you need to enjoy it and be happy.’

“I’m happy for him, that he came to peace with that. I hope they do well up in Oregon.”

Both first-round games Friday will pit opponents who have never played each other, as 1 seed Arkansas faces NJIT and 2 seed Nebraska takes on Northeastern.

Arkansas has faced Nebraska 21 times. The Cornhuskers lead the series 11-10.

The regional at Baum-Walker Stadium will feature two teams with among the fewest losses among the schools who played normal-type schedules as opposed to conference-only or very limited nonconference games.

Fairfield (37-3) will enter the tournament as the team with the fewest losses.

Matt Jones of WholeHogSports contributed to this report.