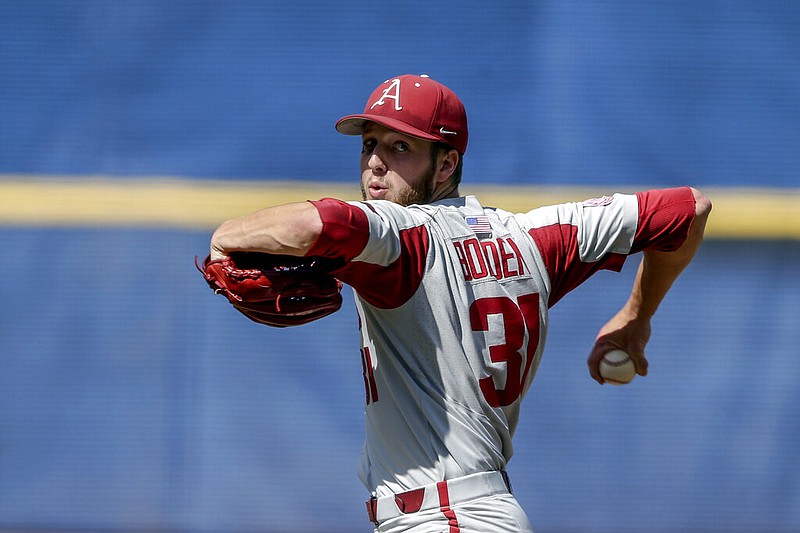 Arkansas pitcher Caleb Bolden delivers against Mississippi in the first inning of their Southeastern Conference tournament game on Saturday, May 29, 2021, in Hoover, Ala. (AP/Butch Dill)

Bolden has started nine games for the Razorbacks this year. He threw four innings in his last start in the SEC Tournament semifinals against Ole Miss.

Van Horn said the decision was made to pitch Bolden because NJIT's lineup is mostly right handed.

“They don’t strike out much," Van Horn said. "They’re going to fight you. They’re going to do whatever they need to score, whether it’s bunt or hit and run, move people around. They’ve got a couple of guys that can hit for power.

"The key for us, like every game, is to throw the ball over the plate and field the baseball."

Bolden has been in and out of the rotation since the second weekend of the season. He earned his first SEC start against South Carolina on April 22.

Slavens out for opener

Slavens, who sprained his ankle last Wednesday during a game against Georgia at the SEC Tournament, was "in practice gear" Thursday, Van Horn said, but it wasn't clear if he practiced.

The timetable for Slavens' return to game action was initially listed at one to three weeks.

“As far as going up and trying to get a base hit for us, I don’t see it yet," Van Horn said. "We did put him on the (27-man) roster. I think he’s getting better every day.

"Obviously, I think swinging the bat, there is a little twisting in there on that front foot when you start to swing. That might be something that we’re not ready to experiment with yet — not tomorrow anyway."

Slavens, who is a semifinalist for the Dick Howser Trophy as national player of the year, is batting .300 and has a .937 OPS this season. He leads the Razorbacks with 60 RBI and is tied for the team lead with 13 home runs and 3 triples.

Vermillion out for regional

Van Horn indicated Vermillion could return to game action if the Razorbacks advance past the regional.

Vermillion removed himself from the Razorbacks’ SEC Tournament semifinal game against Ole Miss last Saturday after his third pitch. At the time Van Horn said Vermillion was experiencing cramping in his bicep and would undergo an MRI on Tuesday.

"He does have a little bit of inflammation in there, fluid in there," Van Horn said. "They’re working on getting it out of there so we can get him back."

Vermillion has a 3-0 record, 1 save and 4.69 ERA in 40 1/3 innings this season. The redshirt junior began the season as a starter, but transitioned into mostly a relief role after the start of SEC play in March.