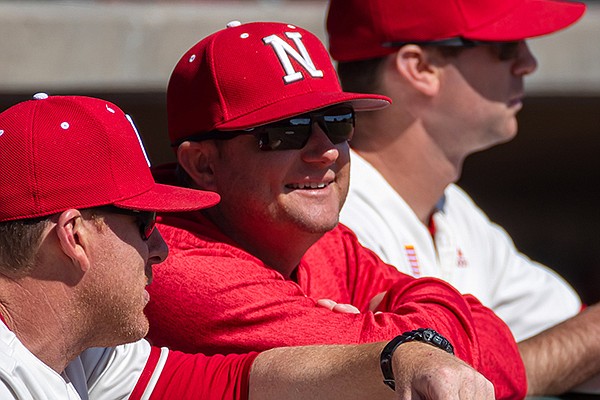 Nebraska coach Will Bolt (facing camera) was a team captain and starter on the Cornhuskers' 2001 and 2002 teams that made the College World Series under former coach Dave Van Horn. Bolt and Van Horn will reunite this week during the NCAA Fayetteville Regional, where Van Horn's top-ranked Razorbacks will host Bolt's team that is seeded second. (Photo courtesy Nebraska Athletics)

FAYETTEVILLE — Nebraska baseball Coach Will Bolt’s old nickname pays homage to the man he might end up having to beat to escape the NCAA Fayetteville Regional this weekend.

During Bolt’s playing days for the Cornhuskers — including a two-year captaincy on the 2001 and 2002 teams that gave Nebraska its first appearances at the College World Series — his style and attitude as a gritty infielder reminded many of the team’s head coach, Dave Van Horn.

Some called Bolt “Little DVH” to give the connection long-lasting legs.

Nebraska At a Glance

Van Horn and his national No. 1-seeded Arkansas Razorbacks are not in Nebraska’s immediate path, but the teacher and pupil could meet during the regional weekend at Baum-Walker Stadium.

Van Horn and Bolt have those games to attend to first, but the possibility of matching up looms.

“Yeah, it’s always a little bit weird when you’re playing somebody in your tree a little bit, but this weekend it’s going to be all about the baseball, there’s no doubt about that,” Bolt said on Monday.

“Yeah, I think I’ve probably heard rumors of that,” Van Horn said. “You know he’s a hard-nosed player and he played second base for me a couple of years. He played shortstop. He was part of the two teams that went to Omaha.”

“We do pretty regularly,” he said. “He reached out to me after we won. I reached out to him after they won the regular season. We keep in touch via text typically. Yeah, we’ve maintained that line of communication.”

Bolt’s Huskers set a Big Ten record for conference wins this season that will probably never be broken. Because the Big Ten mandated a conference-only schedule due to the coronavirus pandemic, Nebraska won a whopping 31 Big Ten games.

The Huskers clinched the Big Ten regular-season title with a 9-0 win over Ohio State on May 23, the fifth of their six shutouts on the season. Because the Big Ten did not hold a conference tournament, Nebraska earned the league’s automatic bid to the NCAA Tournament.

Bolt won four conference titles as a Cornhusker and claimed his first as a coach in his second year atop the program.

“He’s a winner,” Van Horn said. “I’m really proud of Will. He’s worked hard, and he knew what he wanted to do as a young person and assistant coach.

“He got his shot at Nebraska and he’s taken full advantage of it. He’s got coaches that he trusts … and they’re doing a great job recruiting and getting those kids motivated. They got after it up there this year and won the league outright.”

Bolt said he’s adopted the style of baseball he learned in college and applied it to his current team. Assistant coach Lance Harvell — who worked previously for Bolt at Texarkana College (also a Van Horn stop) and came from Sam Houston State under Coach Matt Deggs (a former Van Horn assistant) — is in charge of the offense.

“I kind of saw what worked here as a player and as an assistant coach,” Bolt said. “Bringing Coach Harvell here — he’s kind of been in that same family tree with offensive baseball — and given him complete control of that and he’s done a fantastic job.

“There’s a lot of similar stuff: The pressure bunt game and guys who can run and steal, and then some guys in the lineup who can drive the ball, too. I think you just want to be diverse.”

Shortstop and closer Spencer Schwellenbach was voted Big Ten player of the year, third baseman Max Anderson was selected Big Ten freshman of the year and Bolt was the league’s coach of the year.

“I don’t play for awards. I play to win,” Schwellenbach told reporters Monday. “Just knowing in the fall that I was going to do both — pitch and play infield this year, especially on the back end of games to close games out — it means a lot to me knowing that my hard work has paid off.”

“It’s pretty crazy how his regular season went,” Bolt said. “He hit a home run, I think, on the first pitch of his collegiate career, then ends up hitting a home run his last at-bat of the regular season of his freshman year. In between he was just very, very consistent.

“Then Spencer has meant everything to this team, just as far as the pitching side of it. If we don’t have him at the back end of games, what’s our record look like? He’s hit in the three-hole. He’s played as good a college shortstop as I’ve ever seen in my life. He’s been a leader for the team.”