Northeastern not afraid of big stage 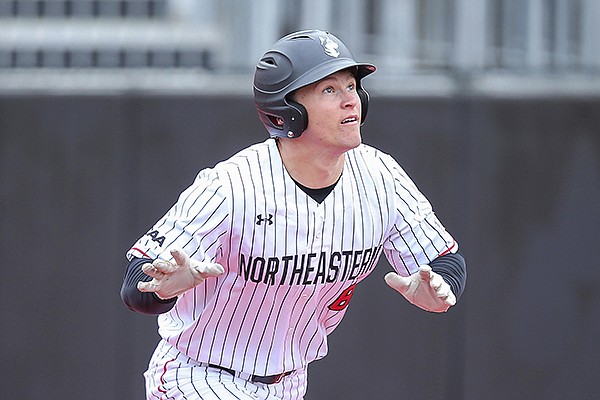 FAYETTEVILLE — Northeastern won the Colonial Athletic Association regular season going away with a 20-3 record, but the Huskies had to work overtime to claim their first CAA Tournament championship last weekend.

Facing CAA South winner North Carolina-Wilmington on its home field, the Huskies trailed 10-9 in the bottom of the ninth inning with CAA pitcher of the year Landen Roupp on the mound.

Northeastern’s Ben Malgeri came through in the clutch, hitting his fifth home run of the tournament to tie the game on an 0-2 pitch to lead off the frame. Then Max Viera launched a walk-off home run in the 10th to give his team an 11-10 win and send the Huskies to their second NCAA Tournament in three seasons.

Northeastern At a Glance

Northeastern Coach Mike Glavine, the CAA coach of the year, oversees a club that sports one of the best pitching and defensive combos in the country, with a high-scoring offense to boot.

Still Glavine, the brother of MLB Hall of Famer Tom Glavine, believes the Huskies will have to reach another level of competitiveness to come out of the Fayetteville regional.

“I think really it’s just belief at this point,” Glavine said on Northeastern social media Monday. “We don’t want to act like, ‘Oh, this is exciting. This is fun just to be there.’

“We’ve got to find a different edge, going into a regional now, and believe that we can do some special things. So I know we believed it going into our conference tournament. It’s taking that same mentality now on the road again and playing … teams we haven’t played in a tough, tough environment and just going down there and playing our style of baseball.”

The mental part of the game, Glavine said, is paramount.

“It’s got to start with a mindset first, and that’s flipping the switch and going down there and believing we can make things happen,” he said.

The Huskies have road wins this season over Wake Forest (20-27) and Old Dominion (42-14), the No. 11 national seed, so they have experience in tough road environments. Additionally, they had to win three in a row in the CAA Tournament after falling to UNC-Wilmington 8-4 in a winner’s bracket game, so they know adversity.

Still, the environment they’ll face at Baum-Walker will be different.

“Yeah, a tough, tough draw obviously,” Glavine said. “Arkansas has just been awesome all year long as is the No. 1 seed, and then obviously Nebraska and NJIT. We’re just excited really, and can’t worry about all that stuff or who we’re playing. We’re just looking forward to a big-time challenge.”

Northeastern’s pitching staff is loaded with talent, mostly from the right-hand side.

Sophomore outfielder Jared Dupere, the CAA player of the year, is hitting .351 and leads the conference with 21 home runs, including four in the league tournament.

The Huskies have five other players with substantial experience hitting .314 or better as part of the team batting average of .298 that ranks 26th in Division I.