Relationship with Smith has Hogs standing out to '23 Georgia LB 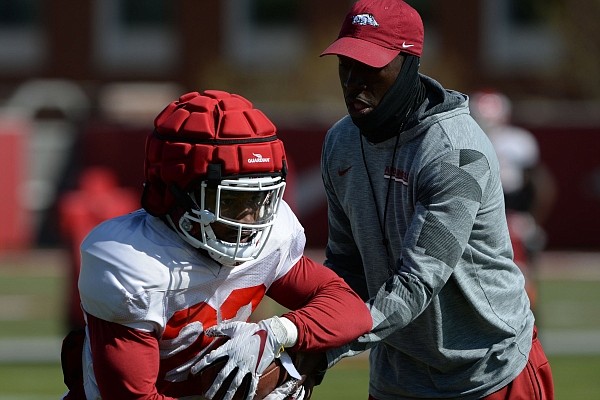 Highly regarded 2023 linebacker Raul Aguirre lists Arkansas as one of the schools that stands out to him because of his relationship with Razorbacks runnings backs coach Jimmy Smith.

“He’s just a great person, man,” Aguirre said. “He cares about you more than football. He checks up on me and makes sure my family is going good. It’s all love.”

Aguirre, 6-3, 220 pounds, of Locust Grove (Ga.) Cedar Grove, was coached by Smith in the eighth grade when the Arkansas coach was the head coach at Cedar Grove before leaving for Georgia State in 2019 and Fayetteville the following season.

Smith led the Saints to state championships in 2016 and 2018 before entering college coaching.

“Playing for him and seeing how he coaches, I want to be around a good coach like that even though he’s not at my position,” Aguirre said. “For him to coach like that, the whole coaching staff has to be like that. He shows me he cares about me as a player and as a person.”

Florida State, Georgia and Oregon are the other schools that stand out to Aguirre. National recruiting analyst Tom Lemming of CBS Sports Network saw Aguirre in November and rates him a 4-star plus prospect.

“Outstanding linebacker. In fact, the No. 1 linebacker in Georgia and one of the best in the country,” Lemming said. “He can read, he can run, a very athletic three-down backer. He will be a preseason All-American.”

It’s no surprise Aguirre values relationships. He, his parents and several brothers and sisters are a tight-knit family.

His younger brothers also play football, and Aguirre is determined to set a good example.

Arkansas has a commitment from his teammate and running back Rashod Dubinion. He said that is another reason he likes the Razorbacks.

He hopes to make a trip to Fayetteville this summer to check out Arkansas.