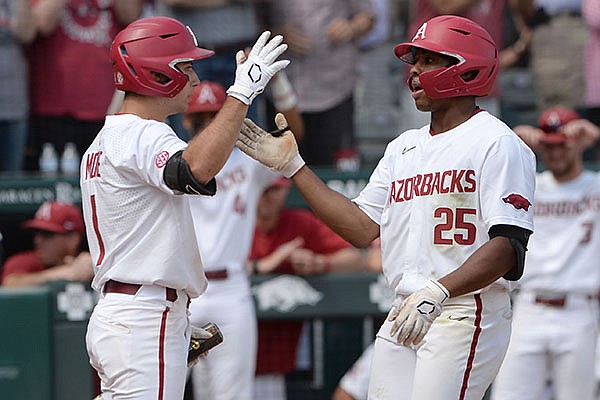 Arkansas center fielder Christian Franklin (25) is congratulated by second baseman Robert Moore after Franklin hit a home run during a game against NJIT on Friday, June 4, 2021, in Fayetteville.

FAYETTEVILLE — There can be no official saves in the box score as Arkansas outlasted NJIT 13-8 in the first round of the NCAA Fayetteville Regional.

But there were two momentum swings in the fourth inning at Baum-Walker Stadium — maybe not saves, but close enough.

They proved pivotal as the No. 1 Razorbacks outlasted one of the least known of the No. 4 seeds in the baseball tournament.

With 11,084 red-clad partisan fans aghast that the nation’s top relief pitcher was needed to get the final out of the fourth inning with the Hogs down 3-2, center fielder Christian Franklin came to the rescue.

NJIT (New Jersey Institute of Technology) had two runners on the move as Paul Franzoni lined a 0-2 Kevin Kopps pitch to deep center.

Franklin, one of the best defenders ever to play at Arkansas, turned his back on home plate to run down the drive, stretching his glove toward the wall to save the day for relief ace Kopps.

No doubt, the Highlanders would have taken a 5-2 lead and built confidence from scoring single runs in the first three innings against three other Razorback pitchers.

Instead, Franklin homered to lead off the bottom of the fourth, igniting a seven-run rally to give Van Horn a much easier decision.

“Once it went to 9-3, we knew we could let Kevin finish it out and we’d be happy with a win,” Van Horn said. “But then we wouldn’t have Kevin for a while.”

Van Horn knew that the recipe for winning the regional called for at least two more victories, perhaps with Kopps pitching to end both.

Kopps got six outs in the next two innings – seven for the day – to finish with only 24 pitches. The other six pitchers used by Van Horn were shaky. They totaled 172 pitches, mostly unable to get a third strike against the Highlanders.

The visitors from Newark, N.J., might take vicious hacks at two pitches, but turned to an approach of slapping the ball the other way into the gaps of the infielders. Van Horn said it was an approach that matched the scouting report.

“It was frustrating because some guys who came in didn’t pitch too well,” Van Horn said. “We didn’t want to throw (Caden) Monke much. I knew it was a crazy way to play the game, but it’s what we did.”

Plus, Van Horn probably knew the Hogs were going to score enough runs. With the wind blowing gently out to the left-field corner, the Razorbacks stroked five homers. Cayden Wallace’s three-run homer in the seventh provided breathing room and gave Arkansas an 8-3 lead.

Wallace, the right fielder who began the game at third base, also saved a run with a strike to catcher Casey Opitz in the seventh inning as the Hogs finished with strong defense. It was in stark contrast to the way they opened the game, with errors in each of the first two innings.

With an explanation of that’s the way baseball goes sometimes, Van Horn mentioned that the Razorbacks had played errorless baseball in their spectacular 4-0 run at the SEC Tournament.

The Highlanders took advantage of the early gifts. They celebrated in their dugout as they knocked out starter Caleb Bolden in the second inning. The entire team waved goodbye as Van Horn came to the mound.

The Highlanders were celebrating in a raucous manner on the way to a 3-0 lead. They held a folding chair into the air, their rally sign over the last two weeks as they won 18 of their last 22 games.

They probably didn’t know that a three-run deficit is hardly anything for the powerful Arkansas offense. In fact, NJIT slugger David Marcano said afterward, “We had them on the ropes.”

Marcano probably didn’t have it exactly right when he said Kopps in the game in the fourth “meant we were ahead.” Yes, it did mean that, but the true meaning might not have been realized.

It means the Hogs are about to rally. Kopps improved to 11-0 with 10 saves. It makes no difference whether the Hogs are ahead or behind when he enters the game.

“We just know he’s not going to give up any more games,” Wallace said. “Between him and our offense, it works out.”

Later, Wallace reminded that a three-run deficit is “no big deal. Our offense can spark at any point and by anybody.”