Pitching an issue for Hogs in regional opener 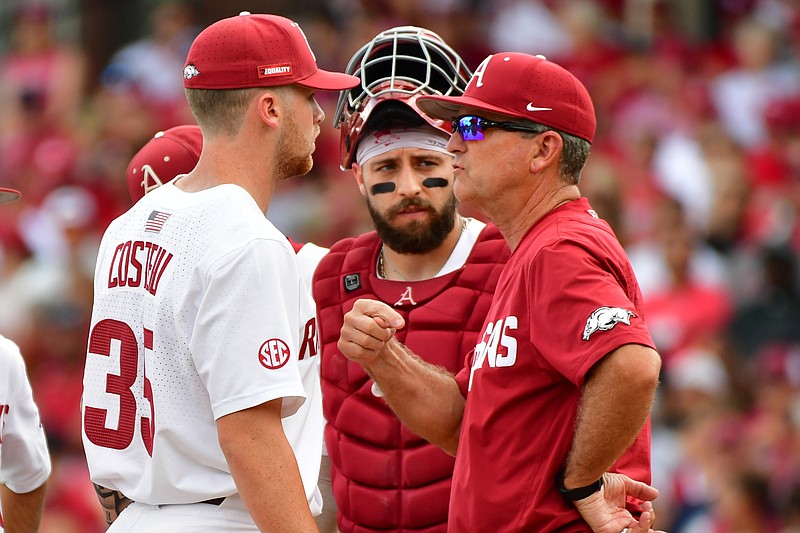 Arkansas won its first game of the NCAA Fayetteville Regional 13-8 over NJIT on Friday, but the Razorbacks had to use seven pitchers to advance to the winner’s bracket.

"Boy, that was a marathon," Arkansas coach Dave Van Horn said. "Got to give credit to our team for hanging in there. Man, it was not going our way early."

Arkansas' starter Caleb Bolden threw two strikes to quickly get ahead of the first batter, but then made a mistake to Albert Choi, who hit it over the left field fence to give NJIT an early 1-0 lead.

"(Bolden's) supposed to throw another pitch away and he throws it down the middle and in and he hits it in the bullpen," Van Horn said. "You’re kind of going, ‘Wow, here we go.’”

The Arkansas pitching staff gave up 11 hits, walked 7 and hit 3 batters. The seven pitchers used were the most by the Razorbacks since the final game of the regular season against Florida.

After Bolden lasted 1 1/3 innings, Connor Noland came in and pitched 2/3 of an inning before being replaced by Ryan Costeiu. NJIT scored a run in each of the first three innings, but it had the opportunity to score more, leaving seven baserunners on over that span.

"I think any time you leave runners on you're a little disappointed," NJIT coach Robbie McClellan said. "Especially when you play a team as good as Arkansas.”

"We stayed out of that big inning against them," Van Horn said. "First three innings, they scored one in the first, second and third where they really could have maybe punched in a couple more here and there and got a big lead on us with one of their better pitchers on the mound."

With two more runners on in the fourth inning, Van Horn turned to SEC pitcher of the year Kevin Kopps.

Kopps pitched 2 1/3 hitless innings while only throwing 24 pitches. It wasn't all easy going for Kopps, though, as the first batter he faced lined a ball to center field. Arkansas center fielder Christian Franklin dove on a full sprint to make the catch and end the fourth inning.

"Kevin gets ahead 0-2 and probably threw the worst pitch he’s thrown in a long time," Van Horn said. "He left it up and in and he hammered it. Franklin helped us out there by making that catch that saved at least two runs."

Ramage settled things down in the eighth and ninth innings. He gave up 1 run on 3 hits and struck out 3 batters while walking 1.

Arkansas' starter for its second game of the regional is still undecided. The Razorbacks will play the winner of Nebraska and Northeastern at 8 p.m. on Saturday.