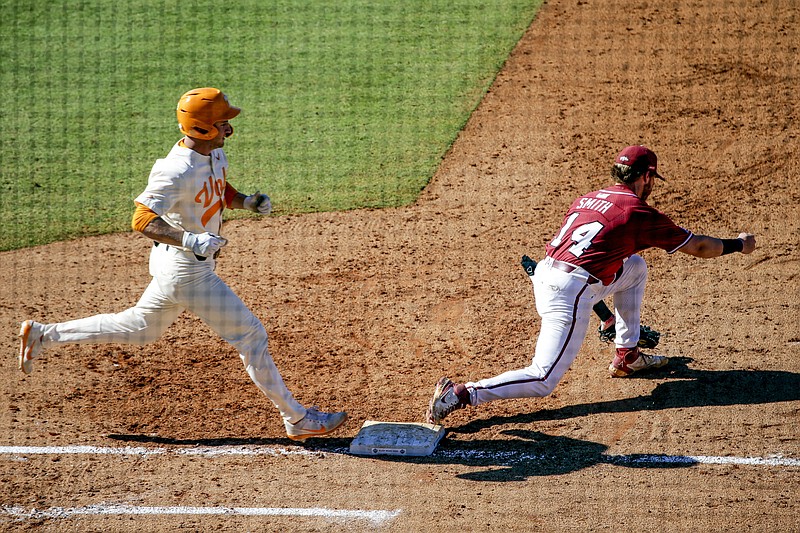 Arkansas first baseman Cullen Smith (14) gets the out on Tennessee's Evan Russell (6) in the ninth inning of an NCAA college baseball championship game during the Southeastern Conference tournament Sunday, May 30, 2021, in Hoover, Ala. (AP Photo/Butch Dill)

FAYETTEVILLE — The Arkansas Razorbacks had a different starting lineup for all four of their SEC Tournament games, but the results remained the same.

The University of Arkansas won every game and didn’t commit an error in beating Georgia 11-2, Vanderbilt 6-4, Ole Miss 3-2 and Tennessee 7-2 last week for the Razorbacks’ first SEC Tournament championship.

“We can play guys anywhere,” Arkansas catcher Casey Opitz said. “It’s something that we pride ourselves on, guys being versatile. That’s what we’re showing.”

One lineup change was necessary at the SEC Tournament when first baseman Brady Slavens sprained his right ankle against Georgia, but Razorbacks Coach Dave Van Horn made several moves to start what he felt was the best lineup for each opponent.

Slavens is still slowed by his injury and won’t play against NJIT in today’s 2 p.m. Fayetteville Regional opener, so the lineup shuffle will continue for the No. 1 Razorbacks.

“It’s very impressive,” NJIT Coach Robbie McClellan said of how the Razorbacks have continued to win without Slavens. “But that’s one of the reasons they’re No. 1 in the country.

“They have so many good baseball players top to bottom. There’s a ton of depth. I’m sure the guys that have come in that don’t get as much playing time as the main guys expect to do just as well.

“It’s kind of the championship culture that they’ve built here, so I’m not surprised at all. They’re coached very well and they have a lot of talent, so it’s just kudos to them and the stuff they do with their program.”

Having some players shift positions at the SEC Tournament and then a full week to practice should benefit the Razorbacks this weekend.

“It worked out pretty good,” Van Horn said. “They all were solid. They all contributed.

“It gives us a little bit more confidence going into the regional because I don’t think we’re probably going to have Brady.”

Van Horn said the Razorbacks are a different team without Slavens, who is batting .300 with 13 home runs and 60 runs batted in.

“It doesn’t take a rocket scientist to figure that out. It’s a tough pull on me and the coaches. We discuss it, how we want to handle this, who we want to put where.”

Cullen Smith moved from third to first base and Jacob Nesbit came off the bench to play third the day Slavens was hurt.

For the next three games Smith played first base and Cayden Wallace moved from right field to third.

“You can go on down the list,” said Goodheart, a senior from Magnolia. “Everyone stepped up and performed as well as they could have.”

Smith, a senior transfer from East Tennessee State, hadn’t played first base since the first three games in the College Baseball Showdown, but he didn’t have any issues on defense.

The move across the diamond also didn’t affect Smith’s offense as he went 5 for 14 in the SEC Tournament with 3 home runs, 7 runs batted in and 5 runs scored.

“He just likes to play, and sometimes we have to calm him down a little bit he gets so excited,” Van Horn said. “He’s got a little bit of football mentality in him.

“It’s tough to play that way every day. In the game of baseball, there’s just too many games, and I talked to him about that a little bit. But you’ve got to love the energy he brings.”

“It was best for the team,” Battles said. “He was very effective and very bought in for the team to play first.”

Smith said it was an adjustment at first base going after balls hit to his right, but he did fine with other aspects of playing the position.

Bates, a freshman from Hot Springs Lakeside, went 1 for 3 against Vanderbilt with an RBI and also drew a walk in his seventh start.

“Bates hasn’t had a whole lot of experience in high-leverage situations, but he’s tough,” Goodheart said. “Fortunately, I got to play with him in the 5A-South. I’d seen that grit and toughness before I even stepped foot on campus.

“I personally had no doubt in Bates, and it showed that he’s not afraid of anyone.”

Goodheart has been primarily a DH for the Razorbacks because of a shoulder injury he suffered in 2019 , but Van Horn said he had no hesitation to play him in left field. Goodheart played left field at San Jacinto (Texas) Junior College.

Playing Goodheart in the outfield last week allowed Van Horn to use Charlie Welch — hitting .409 with 5 home runs and 15 RBI in 44 at-bats — at DH in two games.

“It’s all about how Matt’s arm feels, and his arm feels pretty good right now,” Van Horn said. “So you might see that again.”

Wallace, a freshman from Greenbrier who is batting .291 with 12 home runs and 38 RBI, handled two throws at third base from Opitz in the SEC Tournament to tag out runners.

“Cayden loves to play infield,” Van Horn said. “That’s what he came here as, a third baseman. When I told him he was going to third he was excited about it.”

With Arkansas having a late lead against Vanderbilt, Ole Miss and Tennessee, Wallace went back to right field with Nesbit taking over at third. Braydon Webb also was a late-inning defensive replacement in left field.

“Two of the best,” Van Horn said of Nesbit and Webb as defensive players.

Van Horn said Smith worked at first base about 70% of the time during fall scrimmages.

“We were trying to get him used to it and told him that was definitely an option for him,” Van Horn said. “Plus, we like competition.”

Slavens was at DH early in the season because Goodheart was ill. When Goodheart returned to the lineup, Slavens took over at first base and Smith then got most of his playing time at third.

“Cullen has played everywhere, second and third,” Van Horn said. “To start the season he was our first baseman going into it and he did a good job then.

“We moved him around a little bit and it’s all worked out.”

Van Horn could say the same about the Razorbacks’ other position moves going into the regional.