Razorback assistant to coach at LSU 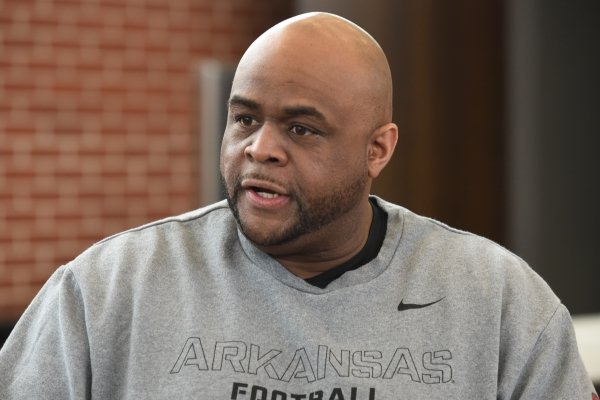 Brad Davis, an assistant coach with the University of Arkansas football team, speaks with members of the media Thursday, February 6, 2020, inside the Fred W. Smith Football Center on the campus in Fayetteville.

Davis, 41 and a native of Baton Rouge, La., has been hired at SEC West rival LSU, he announced Friday. Davis was the first official assistant coaching hire for Razorbacks coach Sam Pittman in 2019.

“I am grateful for the time I spent in Fayetteville and the relationships that were made,” Davis posted to his Twitter account Friday morning. “I am thankful for the coaching staff and the players who worked tirelessly to return the program back to one the fans could be proud of.

“I’m most grateful for Coach Pittman not only believing in me but pouring into me for more than half my life. I am disappointed to not finish the journey we began, but I am excited to return home to my native city and enjoy my parents and siblings. Arkansas is in great hands under Coach Pittman’s watch.”