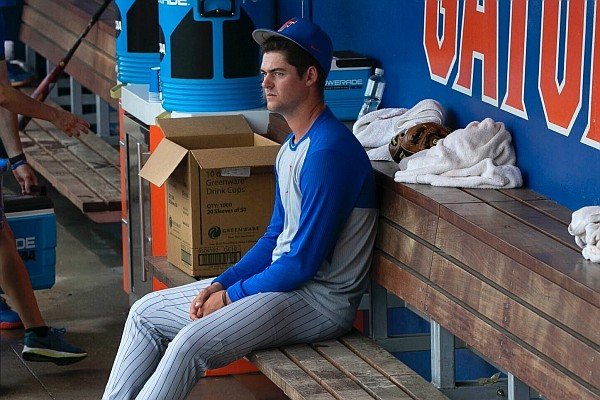 Florida started the season as the consensus No. 1 college baseball team. The Gators ended it on their home field with an embarrassingly fast exit from the NCAA Tournament.

South Alabama beat the Gators 19-1 in the Gainesville Regional on Saturday, the most runs scored against Florida in 15 years. The Jaguars of the Sun Belt Conference had 21 hits, with 10 coming in succession.

The Gators, who lost 5-3 to South Florida on Friday, went two games and out for the first time since 2014, when they also went 0-2 in Gainesville.

"It's just one of those days," coach Kevin O'Sullivan said. "Unfortunately, it's the last game of the year for us. That's something we got to live with."

It won't be easy.

Expectations always are high for O'Sullivan's program, but they were especially so coming into this season.

Florida won 16 of 17 games before the COVID-19 pandemic ended the 2020 season. The Gators returned seven of eight position players from that team and 16 of 18 pitchers — including all three weekend starters — and also brought in a top-10 recruiting class.

The Gators were up and down all season, losing their opening series to Miami at home and finishing third in the SEC East behind Tennessee and Vanderbilt. They were the No. 15 national seed in the NCAA Tournament.

The game against the Jaguars got off to a rough start, with Jacob Young thrown out at the plate in the first inning and starter Hunter Barco recording only one out before being pulled.

South Alabama led 4-1 before stringing together 10 straight hits in a 10-run sixth inning, which prompted volunteer assistant Lars Davis to put pencil to paper while the Gators were waiting out a long rain delay in the seventh.

"I think he came up with like a 1 in 934,000 chance for 10 consecutive hits like that, considering their individual batting averages," O'Sullivan said. "Credit their hitters. We didn't walk anybody. We didn't make any errors that inning. It's just one of those crazy things about this game that makes it so good."

LSU put off Paul Mainieri's retirement at least one more day. Giovanni DiGiacomo's bases-loaded single up the middle in the bottom of the 10th inning gave the Tigers a 6-5 win over Central Connecticut State in an elimination game.

Mainieri, the active career wins leader and seventh all-time, announced last week this would be his final season.

DEVIL OF A GAME

The performance of the tournament so far belongs to Duke's RJ Schreck.

Schreck homered three times, doubled and made a spectacular play in left field to lead the Blue Devils past Wright State 14-6 in an elimination game.

Schreck's hit two-run homers in the first and third innings and doubled in the fourth before going deep again in the fifth.

When Wright State loaded the bases in the sixth, Schreck reached above the fence to rob Tyler Black of a grand slam.