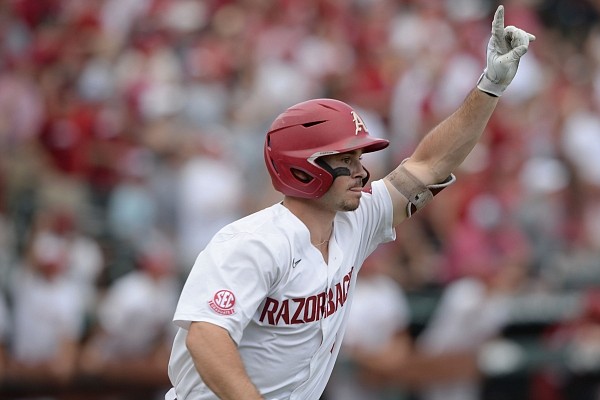 Arkansas left fielder Braydon Webb celebrates Friday, June 4, 2021, after hitting a two-run home run during the third inning of the Razorbacks' 13-8 win over New Jersey Institute of Technology in the first game of the NCAA Fayetteville Regional at Baum-Walker Stadium in Fayetteville. Visit nwaonline.com/210605Daily/ for the photo gallery.

FAYETTEVILLE — The University of Arkansas went on a home run binge in Friday’s 13-8 win over NJIT in the NCAA Fayetteville Regional opener in pursuit of a school record.

The Razorbacks racked up five home runs to reach 98 for the season in their 57th game, tying the school record set by the 2018 team in 69 games.

Nine-hole batter Braydon Webb started the home run crush with a two-run shot in the third inning off starter Tyler Stafflinger for his sixth of the season.

Arkansas got busy in the fourth with three long balls — Christian Franklin’s solo shot to open the inning for his 13th, Cayden Wallace’s three-run blast to left-center for his 13th, and Cullen Smith’s opposite-field liner that just cleared the left-field wall.

Franklin’s home run came off Stafflinger, while the other two were hit off relief ace Jake Rappaport.

Smith’s 10th home run gave the Razorbacks six players with double-figure home runs, and it made the score 9-3.

Shortstop Jalen Battles capped the long-ball fest with a no-doubt solo shot to left-center field in the fifth inning, his sixth of the year.

“I know if you make mistakes, the ball gets little in a hurry,” McClellan said. “They’re so talented it’s tough to navigate through the lineup, and they just hammer mistakes.”

With runners on first and second and two outs, NJIT catcher Paul Franzoni mashed an 0-2 pitch deep to left-center field. Franklin, who had been playing fairly shallow, turned his back to the infield, sprinted, dove and made a back-handed catch at full extension over his left shoulder to retire the side.

Franklin led off the bottom of the fourth with a home run, his 13th, to tie the game 3-3, and the Razorbacks went on to score seven runs in the inning.

“I think the catch really swung the momentum because if he doesn’t catch it, we’re down 5-2,” Arkansas Coach Dave Van Horn said.

Arkansas took control against NJIT after Kevin Kopps entered the game with two outs in the fourth inning. It tied for the earliest appearance by Kopps this season with a game against Southeast Missouri State on Feb. 28, a rain-shortened 11-4 win by the Razorbacks.

Kopps improved to 11-0 and threw just 24 pitches while retiring all seven batters he faced.

“He’s just really nasty,” NJIT Coach Robbie McClellan said. “I don’t want to speak for him, but he’s got a really good idea of what he’s doing. He commands the baseball so well, and that cutter-slider thing that he throws is pretty unhittable.

“He went through the SEC and pretty much dominated it. National player of the year. So he was just really kind of as advertised.”

Kopps had one strikeout.

“You know when he’s in the game, things are going to be pretty tough, but I really like how our guys competed against him,” McClellan said. “I feel like we made some decent contact against him, but at the end of the day he shut us down.”

Arkansas has a .980 fielding percentage and didn’t make any errors in four SEC Tournament games, but the Razorbacks struggled on defense early against NJIT.

“I think Battles rushed that ball,” Coach Dave Van Horn said. “I don’t think he had to come and get that ball that hard, and he got caught in between. With a runner on third and two outs, I think he was just a little too aggressive there.

“Then Connor never got a really good grip on the ball. That was the problem. And he slipped just a little bit when he threw it.”

“It’s about normal,” he said. “You go four games on the road and you don’t make an error, and then you make two errors in the first couple innings at home. I mean, what do you do?”

Northeastern third baseman Danny Crossen made his first home run of the season a valuable one.

Crossen got a pitch up in the zone from Nebraska left-hander Cade Povich to lead off the second inning and deposit it over the wall in left field for his first shot of the year to give the Huskies a 1-0 lead.

Northeastern base runners Jared Dupere and Scott Holzwasser stayed alert and aggressive on a wild pitch by Nebraska starter Cade Povich in the third inning and scored a run because of it. Dupere and Holzwasser broke from second and first, respectively, when a Povich breaking ball spiked in front of catcher Griffin Everett and ricocheted toward the Nebraska dugout.

Dupere saw Everett was struggling to locate the loose ball and kept hoofing it around third base. His slide just beat the relay from Everett to Povich at the plate to put the Huskies up 4-0.

The Highlanders had a potential huge seventh inning short-circuited by a big-league throw from Arkansas right fielder Cayden Wallace, who had just moved to the outfield from third base.

Jared Donnelly’s sharp single to right scored Daniel Helfgott with NJIT’s second run of the inning, but catcher Paul Franzoni also tried to score on the play. Wallace threw a strike to catcher Casey Opitz, who turned and tagged Franzoni. The umpires reviewed the play, and home plate ump Steve Mattingly’s out call was confirmed.

Arkansas Coach Dave Van Horn, when asked who he planned to start in the winner’s bracket game tonight, wasn’t ready to commit to an answer.

“Who’s gonna win?” Van Horn asked, in reference to the night game between 2 seed Nebraska and 3 seed Northeastern, which would determine the Razorbacks’ opponent. “I’ll tell you right after we see. We’re probably going to start [Patrick] Wicklander, but you never know.”

The left-hander Wicklander has a 5-1 record and 2.19 ERA as the staff ace among starters. Southpaw Lael Lockhart (3-2, 4.18), who has stacked a pair of good starts together, also could be a possibility.

All Van Horn would offer when asked Thursday was his Game 2 starter would be a lefty who is pretty good.

NJIT made its first NCAA Tournament appearance and played in front of a crowd of more than 11,000 after not having fans at most of its games due to covid-19 protocols.

“I thought we started the game off really well,” Highlanders Coach Robbie McClellan said. “I felt that we handled the crowd and the adrenaline pretty well. I felt like things were kind of going our way.”

The Razorbacks scored seven runs in the fourth inning to take a 9-3 lead.

“Our goal was to try and limit that,” McClellan said. “We didn’t do as good a job as I’d like today, but definitely proud of the kids’ effort.”

Arkansas was installed as the 5-1 favorite to win the College World Series by the site sportsbetting.ag prior to the start of Friday’s NCAA regional games.

The next favorites are Texas and Vanderbilt, both given 9-1 odds, followed by Tennessee at 10-1 and TCU at 18-1.

Rounding out the top 10 were Mississippi State and Notre Dame at 18-1, then Arizona, Stanford and Texas Tech at 22-1.

Coach Dave Van Horn went with yet another lineup tweak in the regional opener with first baseman Brady Slavens unavailable.

Matt Goodheart got his first start of the season in right field, and Braydon Webb was back in left field for his first start since May 21 vs. Florida. Cullen Smith was in his fourth consecutive game at first base, Cayden Wallace started at third base for the fourth game in a row, and Charlie Welch was at designated hitter for the third game in a row.

NJIT second baseman Daniel Helfgott reached base on a hit by pitch from Caleb Bolden off his elbow guard in the first inning, and it was far from unusual. That was Helfgott’s 16th hit by pitch of the season, and he took his 17th in the fourth inning off Ryan Costeiu.

The 17 hit by pitches are tied for 25th in the country.

Arkansas also had one batter reach base twice on hit by pitches, as Jalen Battles did it in the third and fourth innings. He scored both times.

Helfgott was not retired by Arkansas pitchers. He went 3 for 3, all singles, and reached base in all 5 plate appearances.